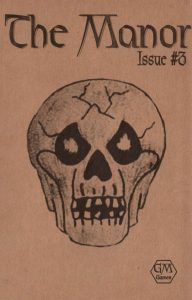 The third installment of the OSR-zine „The Manor“ clocks in at 32 pages, 1 page front cover, 1 page editorial/ToC, 1 page back cover/advertisement, leaving us with 29 pages, which are laid out for an A5 (6’’ by 9’’)-standard, which means you may be able to fit up to 4 pages on a sheet of paper when printing this one out.

The pdf is an evolution in comparison to the previous installments of the magazine, in that it subscribes to specific systems.

First of all, the pdf does contain a new class for Blood and Treasure, the Monster Hunter devoted to Adzeer, God of the Hunt. The class has requirements of Strength and Wisdom of 13 or higher and use the multi-class experience table. The class is allowed to use both all weapons and armor. Skill-wise, we get Climb, Hide, Move Silently, Survival, Tracking, Riding, Decipher Script, and the class gets d8 HD (11th and 12th level yield +3 hp instead) as well as ¾ atk-progression; Fort and Will-saves scale from 13 to 7 and Ref-saves from 15 to 10. The class gets spellcasting progression of up to 7th level, gaining access to BOTH magic-user and cleric spell-lists. The class is a prepared spellcaster until reaching 10th level, at which point the class may cast spells spontaneously. We get a proper spell-list for our convenience.

The class must complete 3 trials: Trial number 1 must be undertaken at 3rd level to progress to 4th: The character’s Perceptor designates a hunting target; upon slaying the beast, the monster hunter must spend 250 gp to enter the 2nd circle. Completion nets a unique armor or weapon that will increase in strength as the character does. Okay, how?

In order to reach 7th level, the monster hunter must choose a target creature and then collect a hunting party (do adventuring companions qualify? How much does it have to be?) and hunt a creature – this is not further defined, which is a bit weird. Also weird: The hunter gets to choose the target creature. The second boon is that the character gets to choose a ranger’s sworn enemy, inflicting double damage against the chosen creature type as well as gaining +3 to atk.

The third trial must be undertaken at the end of 9th level: The character must convert 3d4 targets to Adzeer’s worship (do adventuring companions qualify?) and establish a new temple at 10K sp cost – the benefit here is that the character gets to either become a teacher or continue adventuring…which is kinda lame.

The final ability of the class would be stun monster: A stunning attempt can be made instead of an attack or casting a spell and works akin to turn undead etc. – we get a table. However, all creatures within line of sight of the holy symbol are stunned. The stun lasts a whopping 3d6 rounds and targets drop items or weaponry held and the hunter gains tactical advantage against the targets. Stun Monster works against aberrations, dragons, giants, magical beasts, monstrous humanoids, outsiders and undead. The monster hunter may use this 1/day per level attained. Soooo, potentially really long-range AoE stun. That is really potent, and yes, auto-succeed and destruction are possible at higher levels.

All in all, the class is pretty damn potent in comparison with similar old-school classes; the stun-locking can be rather nova-like and I’m not the biggest fan of the execution here.

Beyond this class, we also are introduced to another installment of the vendor-depicting series of the e-zine, and this time around, we get to know Pog-Nog the goblin, and his cart. The goblin is the survivor/exile of his tribe, one known for omens…and when he pronounced doom for his fellows, he was exiled, becoming a sort of peddling Cassandra – after all, who’d listen to a goblin? The fact that he’s a goblin makes him a good candidate for an in-dungeon vendor, and his foresight as well as the fact that he attempts to prevent some catastrophes can make him for a great ally/recurring character. The entry is system-agnostic and doesn’t provide stats, but we do get some nice adventure-hooks.

The lion’s share of the magazine, though, is taken up by the module “Mine of Rot and Disease”, intended for low level (level 1 -3) characters. The adventure employs the Swords & Wizardry rules and takes place in the village of Aberton. The map for the primary adventure locale, the eponymous mines, is provided in nice b/w, though we do not get a player-friendly version of the map. A huge improvement over the previous installments of the magazine would be that the characters herein come with *REALLY* detailed write-ups: You see, the local NPCs, with their own dynamics, come as basically one-page characters with everything notes, including spells and items, though formatting of both deviates from the conventions. The characters range in levels from 1 to 3 and they can act as stand-in pregens, should you choose to run the module as a one-shot.

The pdf does include a Black Dragon-themed Haiku. Nice!

All right, only GMs around. Things turned sour when the villagers of Aberton noticed straggling figures – defeating them, they noticed that undead had risen…and when they tracked the living dead to their source, that was the old coal mine. Opting for the ole’ “Rocks fall”-trick, Obadiah, the village elder decided to collapse the mine. A few days later, Dowser Creek started to turn icky; it turned yellow and any exposed to it were struck by the Sickness. Folks had sent for help from Ambrose Abbey, but neither it, nor the messengers returned – thus, it’ll be up to the PCs to venture into the mine and fix the tainted river…if they don’t, the village will lose the harvest and face starvation.

An array of adventure hooks have been provided and so are random encounter-suggestions. In order to enter the mine, the PCs will have to survive the nearby undead – and then dig free the entrance. It is then that the weirdest design-decision can be found, one that can wrack the fun of the otherwise nice module. You see, the mine REEKS. As in save or barf, reeking and penalty. EW. However, on a really botched save, at failure of 5 or more, means that the PC can’t enter the mine. I’m totally in favor of degrees of success or failure as a design paradigm, but locking out a character of entry? That just sucks. Statistically, it’s likely that one of the PCs is locked out of the mine for a day before getting the chance to retry – and the module has a timer, with harvest impending, so it’d make sense for the PCs to enter with the character who failed the save sitting outside, twiddling his/her thumbs. That is not cool.

The mine itself is pretty interesting, providing flavorful locations, undead and a desperate goblin tribe, dwindled in numbers from being caught inside the mine with the undead….and they actually are potentially (if no PC is a dwarf or gnome) willing to negotiate their release. Beyond that, the PCs will soon find the culprit, a priest to a dark god who stuffed an otyugh carcass into the water. In order to save the village, the PCs will have to best the undead, the dark cleric (whoc comes with an evil, magic lantern), and then clear the disgusting filth from the disease-ridden spring. The pdf sports, btw., nice b/w-artworks, hand-drawn.

Editing and formatting are significantly improved: The proofreaders did a good job on a formal level. Rules-formatting could be a bit tighter. Layout adheres to a printer-friendly 1-column standard and the pdf comes with hand-drawn artworks in the same style as the cover, which catches the old-school vibe. The map is surprisingly nice, but we don’t get a player-friendly version. The pdf does not have any bookmarks, which constitutes a comfort-detriment.

Tim Shorts knows how to write great characters and he gets the old-school vibe; I very much welcome the focus on actually adhering to proper rules-sets, as this renders the material more precise. The presentation of the villagers in detail is really neat and the hooks are similarly pretty fun. That being said, the new class did not blow me away and the puzzling decision in the module that may see the PCs stalled before the dungeon for days on end if one of the PCs is unlucky….really sucks. It’s not enough to sink the detailed and fun set-up, but it is a detriment to the strongest aspect of the pdf. That being said, the low price does make this worth checking out if you’re looking for an unpretentious old-school module/sidetrek. If a well-executed take on the classic low-level undead-themed dungeon does not seem interesting to you, you may want to skip this one, but if that’s what you’re looking for, then take a look. When all’s said and done, I consider this to be a mixed bag, slightly on the positive side. While the editing and formatting are a definite improvement and while the quality is more consistent herein than in #2, the module is slightly less amazing than Hugo’s in #2. Hence, while overall a stronger issue, I still feel I can’t go higher than 3.5 stars for this one, rounded down.

You can get this solid little zine here on OBS!