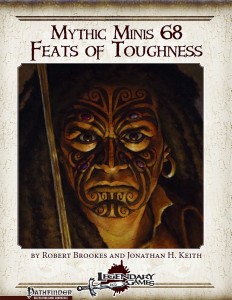 -Bludgeoner: No penalty when using melee weapons to deal non-lethal damage. +1/2 tier damage when inflicting nonlethal damage with a bludgeoning weapon. On a crit, expend one mythic power to add the effects of Staggering Critical; at 6th tier, Stunning Critical. Nice one.

-Bolstered Resilience: DR applies to mythic tier attacks When it’s increased, it treats DR as DR/epic in addition to the normal requirements to overcome it. Spend mythic power to deal your DR as damage to the weapon that hit you, ignoring DR and hardness equal to your tier.

-Deathless Initiate: When in combat while at -1 hp, you do not take damage for taking move, standard or full-round actions and the bonus to atk and damage increases by 1, +1 for every 10 negative hit points. Pretty weak.

-Deathless Master: Immunity to ability drain, damage, bleed and death effects while in negative HP while also gaining +1 to natural armor, +1 for every 5 negative ht points you have. The AC-bonus stacks with itself. Better!

-Deathless Zealot: Attackers receive 1/2 tier as penalty to crit confirmation rolls against you. If a crit is confirmed against you, spend mythic power to mitigate it to a normal hit. If the foe’s CR exceeds twice your mythic tier or if the foe’s tier exceeds your own, you need to spend 2 uses of mythic power instead.

-Disposable Weapon: Apply the benefits to all weapons, not just fragile weapons. When confirming a crit, expend mythic power to destroy the weapon and increase the critical multiplier by 1. Not a fan of further multiplier escalation. This should also have an artifact caveat and some other sort of scaling. Not sold that this is powerful? Oh, there are builds with this one…ouch.

-Improved Stalwart: Expend 1 mythic power as an immediate action to gain stalwart’s ability to one ally within reach. I assume this refers to the character’s reach since no numerical value is given. On a nomenclature nitpick, this feat refers to ” a point of mythic power” when one usually speaks of “one use of mythic power.”

-Nightmare Fist: Add free demoralize to attacks you execute in magical darkness; provides condition-escalation and panicked characters are flat-footed to you. Does the condition scale up to cowering or not?

-Nightmare Striker: Adds +1 round of paralysis (+1 per 4 tiers) to foes that fail to resist Stunning Fist while subject to your faerie fire. Too circumstantial for my tastes.

-Rebuffing Reduction: When successfully using the defensive bull rush, damage foes equal to the damage that failed to bypass your DR + 2 x tier. Okay one.

Editing and formatting are good, I noticed no glitches on a significant, rules-impeding level. Layout adheres to Legendary Games’ 2-column full color standard and the pdf has no bookmarks, but needs none at this length.

Robert Brookes and Jonathan H. Keith deliver a solid array of feats herein -and in quite a few instances, I enjoyed seeing increased defense capacities herein. At the same time, I often felt like the feats did not go far enough – further increased defenses would be feasible in my book, especially seeing how the significant increase in offense Mythic Adventures provides. So yeah, while not bad per se, this pdf does have a few minor hiccups and somewhat disappointed me, due to not going far enough. However, it should be noted that this still is a nice buy. My final verdict will clock in at 3.5 stars, rounded up to 4, though GMs looking for more staying power should instead check out the Mythic Paths-books on dragons and villains.

One more note – the editorial mentions Jason Nelson, Jonathan H. Keith and Jeff Lee as the authors, so in case I got that wrong, I apologize: I went with the author names specified on the cover.