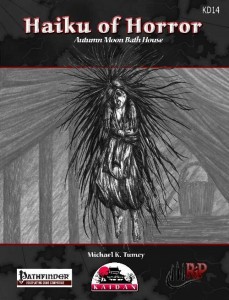 The first of Michael Tumey’s Haiku of Horror series of supplements details a bath house and as such, since in Western culture they are not that common, we kick this supplement off with an introduction on the concept of bath houses that essentially takes the basic concept from Japanese culture and introduces the audience to Kaidan’s particular take on the concept as well as providing concise lists of prices. Throughout the supplement, terms ranging from the distinction between “onsen” and “sento” as well as “tatami” are explained in concise boxes that not only help immerse into the given setting while providing some additional knowledge and bits of trivia that may broaden your horizon if you are not that familiar with Japanese culture.
Now this does not mean that this is some dry textbook, mind you – instead, we are introduced to the Autumn Moon bath house, fully mapped in gorgeous full color on 4 full-page maps. The house itself gets a room by room description and after that, a fluffy summary of the current servants/attendants introduces us to a basic net of allegiances that represent the social dynamics of the house.

Here are some SPOILERS. Players should jump to the conclusion.
A tragedy has befallen the bath house and ever since then, the place is haunted: An attendant called Kana has met an end most foul: The young beauty (and secret witch-in-training) sought to escape the bonds of her servitude and find love in one fell swoop. Enjoying a secret wedding ceremony with her betrothed, the chaste maiden set out to commemorate her marriage with her beloved. This act was, unfortunately, misinterpreted by the bath house’s mistress and former proprietor of Kana. Thinking her subordinate was conducting prostitution under her roof, the rage at the humiliation and loss of face prompted her to use her brush and drown both poor Kana and her beloved. Said dread secret is still tied to the place, Kana’s pillow book (=diary) is still hidden in the bath house and at night, her ghost is still roaming the place.

Speaking of ghost: We don’t get only one incarnation of her, but rather a massive array of 5 (!!!) versions of the build, spanning CRs from CR 6 to a whopping CR 22. Beyond that, she is not a regular ghost, but rather uses the new, also featured Yurei no kami (grappling hair ghost)-template, at CR +3 and even 4 new haunts (one of which has a very minor formatting glitch) as well as a new curse, the Ju-on – a grudge, in case you’re not familiar with the movie. We also are introduced to traditional Kaidanese marriage gifts, since they are relevant for properly dealing with the spirit.

In addition to the content, we get 33 pages featuring the map of the bath-house to cut-out and use with miniatures as well as high-res versions of the gorgeous maps.

This essentially is both a map, a mini supplement of a nice location, some complex stats and finally, a sandboxy mini-adventure/ bare-bone-style red herring to be inserted into a campaign, all in one – whether you want to use it as a diversion, blow it up to full-blown adventure-status or just use it as a backdrop, this bathing house has something to offer – and at a very fair price to boot! That being said, as the first installment, I think there’s some room for improvement, namely the environment of the place – whether it is the hardness of the wall, slippery floor or similar minor DCs and details that make places come to life – the bath house, as awesome as it is, could use some small bits and pieces like this to make it feel a bit more organic: Locking doors, vortexes (including swim checks) etc., perhaps a page from the pillow book – in short, some action for the skills (perhaps using one set of DCs for each intended level range) would have made this even better.

As written, we still get a cool location oozing flair and some VERY creepy imagery and crunch for a very fair price. Nevertheless, I feel like this misses the highest echelons by a slight margin, making me settle for a final verdict of 4.5 stars, rounded down to 4 for the purpose of this platform – still, a recommended purchase if you’re looking for some easily inserted horror, though!

You can dive into the refreshing (albeit deadly) waters here on OBS!