The Genius Guide to the Vanguard 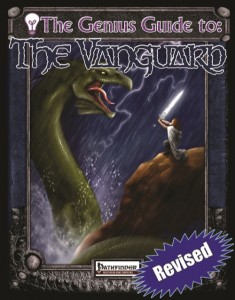 If you’re a regular on these boards and to reviews, you might recall my first review of the Vanguard – which admitted to being unfair. The class came out before the Magus and I judged it in direct comparison to Paizo’s class. Now, my verdict then was that the Archon is more interesting and that I didn’t see a good reason for this class. Now, this is the REVISED edition and I wrote it in capital letters for a reason. The pdf has been given a major overhaul and thus I also reevaluate my take on the class.

For those of you new to the party: The Vanguard is a gish-class (arcane caster/fighter-hybrid) with 3/4 BAB, d8, 4+Int skills per level, good fort and will-saves, proficiency with light armors, shields and martial weapons and Cha-based spontaneous spellcasting of up to 6th level. The release of the magus-class has impacted the vanguard in more than one way – essentially, the abilities have been completely rewritten and expanded upon. But let me elaborate first: The Vanguard bonds with a specific weapon that essentially becomes the material component of his spellcasting and which can even be enchanted at higher levels.

The weapon being essential for a vanguard to work, this is both a strength and a weakness and thus destroying/disarming a vanguard is a hard feat to pull off, with abilities like iron grip etc. preventing it and the weapon actually “healing” damage. Of course, delivering touch attacks via the blade is an option and the vanguard becomes consecutively more adapt at channeling touch spells via his weapon of choice. The vanguard also gains access to vanguard tactics, which enable him to use his intelligence to the benefits of his allies via his tactics and then there’s the vanguard blast – essentially a kind of unerring, magic missile style blast, the attack improves over the levels and may even deal elemental damage.

This reliable output of damage, coupled with tactical prowess and an arcane bond is neat. What’s even better, though, is that the once linear progression of the class has been abolished in favor of more customizability: A total of 9 spell maneuvers, special abilities that range from the ability to block spells (dispel them) to the option to increase casting time for an added oomph are included. The ability to cast some spells as swift actions each day is retained in the new version.

A total of 10 feats (where formerly were only 3) are also part of the deal and let you expend spells for temporary protective magic auras, expand upon your bonded weapon’s enhancements and even add a first-level sorceror bloodline power to your roster of tricks. Oh, and arcane smite can also be expanded: Arcane smite lets you expend spells to store damaging energy in your blade and discharge it upon unwilling foes – for painful results!
The pdf ends with 2 spells that summon an arcane bonded object and a box that elaborates on the usefulness of multiple gish-classes in one setting.

Conclusion:
Editing and formatting are top-notch, I didn’t notice any glitches. Layout adheres to SGG’s 3-column standard. the artwork is stock and nothing truly exciting. The pdf comes without bookmarks, which is a minor bummer. Oh BOY! I complained about the linearity of the class – it’s gone. In its place are options galore. I complained about a lack of signature abilities. Now we have multiple ones. I complained about a lack of feats. Now, the additional feats open up whole avenues of different character concepts. This new Vanguard is up to the times – smarter, better, cooler in every way and armed with a plethora of abilities that make it stand out from the Archon and the Magus, this revised edition is mind-boggling in the sheer amount of ways in which it is better than its predecessor. For this review, I sat down and compared the old and the new pdf and am happy indeed to pronounce: This revised edition is so far superior to the first one, it’s not even funny. In fact, I’m extremely glad to see this – author Marc Radle has taken a class that had become outdated and infused it with a whole new spark of life, a complexity and a wealth of iconic options that make this revised edition truly stand its ground and make the class a great one.

This is beyond an updated version. This is not simply an overhaul. It is one of the most expansive and well-made revisions I’ve yet to see of an rpg-product. Product support like this is scarce indeed and I’m still a bit baffled by the lengths to which this revision goes to make the class not only appealing, but an iconic one that makes you immediately want to try it. I am deeply impressed and since all my gripes have been taken care of and since this class now truly deserves it, I’m happy to revise my verdict and give the revised vanguard 5 stars plus the Endzeitgeist seal of approval.