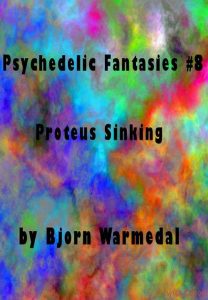 This installment of the Psychedelic Fantasies-series clocks in at 11 pages of content, so let’s take a look!

Yep, we get basically a fifth of a page editorial and the like – and then, the rest is adventure. This series adheres to a pretty minimalist approach to module presentation – two columns of black text in a white background. Headers are bolded, but the small statblocks have no internal formatting – this is as minimalist as can be. As for the rule-set, the module does not subscribe to a particular OSR-game or edition, claiming general compatibility, which means that you will have to do some tweaking to modify the module for your preferred old-school game. 60’ (20’) are the default movement rates, HD are noted, and AC is provided only in that it notes “as unarmored”; the monsters denote their saves by e.g. using “F2” as a shorthand for saving like a second level fighter. Abilities, if relevant, are properly stated in this one, which is a plus in comparison to some other installments in the series.

As in all psychedelic fantasies, this has only the strength of its prose to lean on – no artworks, no read-aloud text, no handouts. The module is intended for levels 1 – 3. I’d recommend the module for levels 1 – 2, personally; it’s not a cakewalk. But the module isn’t exactly old-school hardcore regarding its difficulty – while there are scenes where careless PCs can die, the module is pretty fair regarding its handling of these situations. Thankfully, save or die situations are largely absent, with only one mutation of a creature potentially presenting such a threat. There is a functional b/w-map on the final page of the module, which comes with grid, but not with a proper scale. The map does not feature a player-friendly version sans location key, which is a bit of a bummer.

The adventure comes with a nice random encounter selection (all critters fully statted!), a d10 random mutation table and two event tables” – a d6 table to determine what happens when a pipe breaks, and a d10 table to determine what happens when you push a button. We also get a whole d20 table of treasures to be found in chests, which are suitably strange. The module features 3 new spells that are properly codified, though they do not state the casting class that gets them: Truth-seeing is a level 1 lie-detector (and isn’t that well-situated at that level); gelatinous transmogrification is a permanent level 2 spell that transforms air/gas into gel. This is the most interesting one. Sturmvorbereitung is German and could be read to mean “preparations for a storm”, or “preparations to charge” in an intrinsic ambiguity of the language; the latter seems to be intended here, as the level 2 spell nets a bonus to AC and attack. All in all, these spells are solid.

The module also contains 3 new creatures, but in order to discuss them, I will need to go into SPOILERS.  Potential players should jump ahead to the conclusion.

All right, only GMs around? Great? So, the Proteus is a space ship that has crashed right on top of a massive tentacle beast – not it, slightly sloped, lies in a tarry, oily pit – the tentacle thing at once wants to get inside and keeps the ship from sinking. This may be the least well-considered component and my only structural niggle here – the presence of the tentacle beast (whose tentacles are one of the new monsters) and how it hampers access to the ship isn’t really considered.

Anyhow, inside the Proteus, the angle becomes pretty awesome: The pilots are the globonauts, humanoid slimes that seek to foster and understand happiness, but who are utterly incapable of feeling it. Huh…I guess my totem is the globonaut…Kidding aside, the reason why the ship crashed is pretty cool: You see, it is piloted by essentially brains-in-a-jar that usually are Lawful. However, the ship has become infected by a psychotropic virus, transmitted by vector of spiderlings – a monster-species that was created by the virus mutating the globonaut pet spiders. Yeah, this is awesome. Particularly since the spiders are pretty much omnipresent and can really create a sense of paranoia – they can move through the ship’s guts, and pushing the false button may upset them in their nest. Otherwise, they can be used to keep up the pressure and the paranoia-levels – which is great, particularly when contrasting them with some of the surreal scenes, like the room that is a globonaut-disco where everyone is awkwardly standing around, not really sure what to do.

The infection with the virus is btw. represented in an easy to discern, visual manner, and the PCs can actually save or condemn the Proteus and its crew – while infected globonauts tend to be nasty, there is actually pretty much room for proper roleplaying, which was something I very much enjoyed seeing. The module also gets something right few adventures do – the balance of “pressing random buttons” and the effects – the adventurers obviously can’t understand the Proteus, and some button-pressing can be fun. If it results in random death, as in many modules, that fun turns sour. Here, pressing the right buttons can change certain rooms, and if the Gm does their job right and tracks the effects properly, the PCs can actually learn which button does what. Considering the few pages this module has, that’s a pretty impressive achievement. And in case you were wondering – this may be a bit less psychedelic than some other modules in the series, but it does have a sufficiently weird style to make it fulfill the psychedelic fantasy-angle.

Björn Wärmedal’s “Proteus Sinking” provided a positive surprise for me. The module manages to create an alien and genuinely fun atmosphere that reminded me in many ways of Venger As’Nas Satanis’ writing with less pop-culture references and slightly more surreal angles and internal logic. In short, this has a style I very much enjoy seeing. Oh, and guess what? The module is available for PWYW! This is definitely a plus, and a good reason for me to round up from my final verdict of 3.5 stars. Now I have to track down the author’s other work…

You can get this slightly gonzo and fun little module for PWYW here on OBS!

Enjoying my reviews? please consider leaving a donation or joining my patreon here.