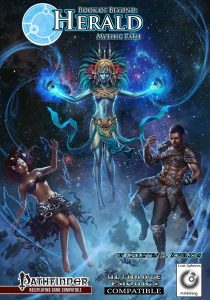 Okay, so, like in the Wielder path file, this recaps that Lost Spheres Publishing’s supplements have the concept of different sources of power: The power-sources are arcane, divine, entropic, material, psionic and temporal. There is one more thing to note: The pdf introduces a rules term, namely the “source entity” – this entity is basically akin to the Wielder’s bonded item – the source of the mythic path’s power and the linchpin of the abilities presented within. The source entity may be anything, from a deity or outsider to a cosmic principle to a thing from beyond.

That out of the way, the mythic path grants 5 hit points per tier and begins by granting one of three “Channel the Master”-abilities. The first, “Fist of the Master”, nets you a slam attack as appropriate for your size; you may expend a use of mythic power to ignore hardness and DR as though the slam was adamantine for 1 minute. During this time, you also add tier to damage rolls. The second choice, “Breath of the Master”, lets you, as a free action, expend one use of mythic power to ignore a condition for 1 round per tier. Thirdly, “Dreams of the Master” lets you expend one use of mythic power as a standard action to manifest a psionic power or spell of your choosing of a power level equal to half your tier. Two problems: 1) This RAW does nothing at tier 1 – it lacks the “minimum 1”-caveat. 2) This should specify that it can only duplicate spells or powers of a casting time less than 1 minute; otherwise, this ability could be used to standard action-cast rituals, which is clearly not intended. As always, one 1st-tier path ability may be taken to gain an additional one of these abilities.

Unless I have miscounted, the pdf provides a total of 29 different 1st tier abilities, so what can heralds do? Well, there are some genuinely unique path abilities here, case in point, alien presence. You select one power or spell of half your tier or less that has the[mind-affecting]-descriptor possessedby your source entity, and emit it constantly in a radius of 30 feet per tier, with save DC, even if it usually does not have one, of 10 +1/2 HD + tier. You may spend a mythic power to activate or suppress the aura, and it remains in effect until you become unconscious – as a balancing tool, the ability has a hex-caveat: If a creature saves, it’s immune for 24 hours. Fits the herald theme very well. Calling tier-based henchmen, gaining access to psychic skill unlocks as well as a divination spell or clairvoyant power to use at will may be found.  Scaling AC-bonuses that may be temporarily enhanced by mythic power expenditure, and there is an alternate surge that, while potent, prevents you from using mythic powers while in effect and ends with a period of exhaustion. There is a path ability that lets you use Breath of the Master to ignore multiple conditions at once.

As in the wielder-pdf, a peculiarity of the pdf is that it does not explicitly point out prerequisites required; while these are obvious, it’s something to bear in mind – this does require some system mastery. As a nitpick – the ability for additional condition suppression erroneously refers to “immunity”, which isn’t actually something it does….which becomes more relevant with another upgrade, which extends the duration of breath of the master. Cool: There are two path abilities that let you use mythic power to absorb energy the source entity is immune to, and use it to heal or replenish limited resources. Based on these path abilities, there is another that lets you temporarily help creatures touched this way as well; here, the prerequisite is properly called out. These abilities can be further enhanced and allow you to store energy, and you can unlock additional energies. I really like this path ability complex. There also is a means to spend a move action to share your experiences with the source entity; Fist of the Chosen can be combined with SP or Psi-like abilities granted by a series of path abilities that net you SPs or Psi-like abilities. Nitpick: These SPs/psi-like abilities should specify in the context of this combination that they can only apply if casting/manifesting time is 1 full round or less to avoid long cast exploits.

Gaining access to hypnotic stare, and building on that, painful and bold stare, is also covered. Limited access to an implement school, and bonuses to the influence threshold of the medium are also covered – the alter in particular is nice to see, considering that the medium badly needed means to increase that cap. Boosts to Knowledge skills (not properly capitalized) and slow, but perfect flight (which can be sped up with mythic power) makes sense. There also is a means to get limited access to an oracle mystery, and a medium spirit-like power, which represents the presence of the master. Wildcard feats and limited evolution points, allowing the master to speak through you, and bestowing source entity related enhancements to weapons or scaling telepathy complement this selection.

The pdf features 13 3rd tier abilities, which include immunity to an environmental condition or effect per tier (this could use some specifics), the ability to travel from planet to planet (cool!), share your flight, unleash stored energy in blasts, enhancement of aforementioned presence (for really nasty auras) and similar enhancements of the previous abilities. What started as a hunter’s skill boost to track down targets at 1st tier now allows you to track teleportation effects, and you may lesser evolution surge. Tapping into the source entity’s power for surges and communion can also be found here.

The pdf also features 7 6th tier abilities, which include mythic power-based plane shift/interplanetary teleport (spell-references not in italics), sharing the surges granted by the master, brings folks along through space, emit stored energy in brutal novas or imbue  abilities in targets. The capstone ability lets you roll twice and take the better result when rolling an attack roll against a foe of your source entity, while creatures attempting to confirm a critical hit against you roll twice and take the worse result. 1/round when confirming a critical hit against a mythic foe of your source entity, you can regain one use of mythic power. As long as the source entity doesn’t have mythic kittens or rats as foes, this can’t be cheesed, so I’m good with it. 😉 (Kidding aside, control rests firmly where it belongs – with the GM.)

Editing and formatting on a rules-language level tend to be very good with a few exceptions; on a formal level, there are a couple of more snafus, like saving throw names not capitalized etc. Layout adheres to a nice two-column full-color standard, and the artwork provided for the supplement (seen on the cover) is awesome. The pdf comes fully bookmarked for your convenience, and the pdf provides more content than you’d expect from the page-count.

Christen N. Sowards’ herald is a cool angle to pursue – the focus on the sourced entity is an interesting one, and the herald ultimately is rather different from e.g. Legendary Games’ Path of the Bound, feeling, well, more like a herald of a mighty entity. If you wanted to be Silver Surfer, you can definitely be that now. I particularly liked the energy storage and use sub-engine presented here, and there is a lot of storytelling potential going on here. At the same time, there are a few rough spots that cost this access to my highest rating-echelon; still, as a whole, I can wholeheartedly recommend this supplement if you’re looking for some cool mythic tricks! My final verdict will be 4.5 stars, rounded down.

You can get the entire Book of Beyond here on OBS!

If you value what I’m contributing to the RPG-scene, please consider leaving a donation or joining my patreon. Thank you.