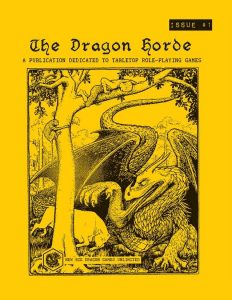 So, first things first – this publication’s name is not a typo, but a joke. While hoard/horde is indeed one of the most common homophone errors I encounter, this time it’s no error. As for the rules-sets employed, the publication sports both 0e/1e stats and B/X-stats for the monsters included in the start – these would be a leech man, and a halfling/elf racial mix. Both are decent, if not spectacular critters. Both come with passable b/w-artworks.

After this, we have a one-page article that is system neutral – you can determine with a d30-roll where a weapon hits. The page is deliberately made to look like a hand-written excerpt from gaming notes (or represents a scan). It’s solid, if not spectacular, suggesting an optional rule for temporary loss of the use of a limb on full damage being rolled.

After this, we have a one-page list of familiar guidelines for “The System” by New Big Dragon Games Unlimited. Next up is a pixilated overview map (which seems to depict a continent, I’m not sure – no scale of context is provided), we are introduced to Lerdyn Chrisawn’s Chronicle, a kind of chronicle of everything that ranges over ten thousands of volumes from the era of Ante Chaos to Praeter Chaos – the writing here is nice, but lacks any type of context – with democracy and the like noted and the somewhat Aasimovian theme, an impression of a scifi theme is evoked, but from the text here, this remains hard to discern. An NPC-class, the Chroniclist, is based on this concept. The Chroniclist specializes in the chronicle and learns increasing amounts of specialized knowledge as well as a ridiculous amount of languages. The NPC-class uses d4 HD and gets spells of up to 4th level, as well as perfect memory, the ability to discern the true meaning of words and the like. I enjoy the concept, but I wished it had been balanced as a PC-class instead; the notion is cool, but the execution and its tie to the cool, if opaque lore, does limit the immediate usefulness of the class.

That being said, there are a couple of helpful things in here – there is a handy spreadsheet that lists which creatures speak what language and a pretty nice tavern patron generator that creates a patron in 4 die-rolls, plus optional roll for a Charisma score. I like this generator! The pdf also includes 7 magical weapons – none of them are particularly interesting. A spear that splits in two when thrown? A short sword that lets the wearer mirror image? Yeah, not blown away. This would also be the place to note that this pdf suffers from a layout decision that thankfully does not feature in the follow-up installments of the ‘zine: The majority of the ‘zine uses a font reminiscent of a typewriter font.

I HATE THIS FONT. With a fiery passion. I know, it’s supposed to look “old-school” and tug at nostalgic heart’s strings. It just annoys me, as there is no formatting for spells and rules-relevant components beyond a few instances of bolded text, and it’s harder to read. So no, it’s not just aesthetics, it does hamper the immediate usefulness of the supplement.

Ahem, excuse the outburst. The supplement also includes a brief low/rare magic-y module intended for 4-6 characters level 1 – 3. The complex features 45 keyed locations, though some of these denote empty rooms. The complex is surprisingly non-linear (a plus!), and the dungeon is of low to middle difficulty. It is per se pretty cookie cutter, but does have a couple of cool ideas – including the means to make figurines come to life. The main antagonist of the module is also nice, an intelligent panther revered as a deity (not a SPOILER – the introductory text states as much). The module has no read-aloud text and sports a decent one-page map with grid, but features no player-friendly version. Two random encounter tables are provided, but frankly, I can’t see myself running this one – it lacks too much in the way of actually interesting material. The other free offerings by New Big Dragon games Unlimited are more worthwhile.

Editing is surprisingly good on both a formal and rules-language level. Formatting suffers a bit from the font chosen. Layout adheres to a one-column b/w-standard, and artworks are hand-drawn or public domain b/w. Same goes for cartography, which, while functional, lacks player-friendly versions. Annoyingly, the pdf version lacks any bookmarks, making navigation a pain.

Richard J. Leblanc, Jr. has a lot of cool free and super-inexpensive material to offer. Unfortunately, this ‘zine is not exactly an example for “cool”. I very much like subdued and more realistic, low-key fantasy, but this supplement failed to excite me. It lacks a leitmotif, cohesion, and while I don’t object to a cornucopia/salad-bowl style ‘zine, here, the articles universally suffer from not having enough room to properly shine. As a person, I got nothing from this ‘zine. Nothing at all. This pretty much aggressively bored me, something that rarely happens.

As a reviewer, I have to account for the fact that this may not necessarily hold true for everyone, and this pdf is FREE, so yeah. Taking these components into account, my final verdict will be 2.5 stars, rounded up due to in dubio pro reo and being free. That being said, I strongly recommend getting the excellent and vastly superior “Vault of the Faceless Giants” instead to get an idea of the author’s capabilities instead.

You can get this FREE ‘zine here on OBS.