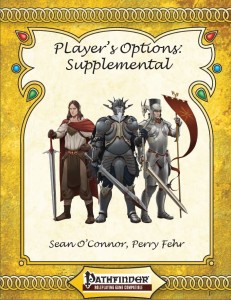 The final pdf of the “Paths of Power Player’s Options”-series clocks in at 15 pages, 1 page front cover, 1 page editorial, 1.5 pages of SRD, leaving us with 11.5 pages of content, so let’s take a look, shall we?

The pdf kicks off with gladiator archetypes – not for TPK Games’ gladiator class, but rather for that ne introduced in the first “Paths of Power“-pdf. If you don’t have that one, rest assured, though, that you should be able to scavenge some ideas from these and reappropriate them for TPK Games’ class, should you choose to. A total of 3 such archetypes are provided – the Auctorati being a galadiator who is not very deep in debt, while the Bestiarius is a gladiator with less of an urban focus, translating to different skills and skill bonuses as well as a specialization in slaying (and training!) animals. Finally, the Morituri may replace 1/day a skill-check’s result with Knowledge (nobility), has a fixed reputation and seeks death at the hands of a worthy foe – this is represented via bravery as well as some restrictions in life-prolonging feats and a penalty to saves vs. death effects. per se solid, if not particularly exciting archetypes.

Next up would be a new 10-level PrC, the Grave Tyrant, who receives d8, must be evil, gets 4+Int skills per level, 1/2 will-save progression and 3/4 BAB-progression. While their channel energy progression remains intact, they exchange any spellcasting progression with a slow apotheosis towards undeath. The main draw of the class, though, would be the increase in power of the command undead feat that is a requirement to enter the PrC – the Grave Tyrant provides massive benefits to all undead under his/her control and the amount of undead the class can control rises to up to 10 HD per level – which is a lot indeed and makes relatively clear why the class receives no further spellcasting progression. A solid take on the master of undead, if a bit linear for my tastes.

The LG-only Monk of the Holy Blade archetype is a master of bladed weapons and may flurry with them – which is kind of a can of worms in itself that the pdf actually manages to get somewhat decently handled -instead of going with the default flurrying rules, the two weapon fighting-feats are taken as a base-line, thus avoiding the issue with interchangeable attacks. Now rather nasty, base-damage of the blades is increased similar to a monk fighting with unarmed attacks – here by one step per 5 levels and to add insult to injury, the archetype learns smite evil and by infusing ki into the weapon, it is rendered enchanted. And usually I would complain – swords are more common, more often enchanted etc. pp. The archetype gets smite, one of the paladin’s best tricks… And yes, the archetype is stronger than the default monk. Here, that’s not necessarily a bad thing. The LG-restriction, the woefully underpowered base class…yes, this archetype is strong, but as a kind of holy, sword-wielding monk, I do think it works.

Speaking of the Holy Blade – a cavalier order devoted to helping those that can’t help themselves – a solid order of good guys with bodyguardish abilities.

We also receive 3 archetypes for the Voyager class – the cannonier (amateur gunslinging), the Filou (who learns a very limited array of spells, may levitate vehicles and is inspired by Honoré Beaugrand’s “La Chasse-galerie”) and the trappeur, who receives ranger traps and appropriately modified skills. Especially the Filou, with its very distinct, unique ability is cool.

We also receive new items, with DR-granting riot-shields and kits to better break down doors as well as feats – a lot of them; 32, unless I’ve miscounted. A pistol/blade variant of TWF, being able to drink more – per se solid pieces. But there also are some gems here – using shields as a brace versus charges to negate bonuses granted by charging, a feat for poison use in battle, threatening adjacent squares with loaded firearms for melee gunslinging – the feats usually have some cool idea going for them. I also like a shield-based feat that allows you to negate a critical hit as an immediate action by succeeding a fort-save 1/combat…only that the 1/encounter mechanic is just bad (insert my contra-per-encounter-rant) and fort-saves versus crit-confirmation seems hardly fair – I like the idea, but the feat’s limit needs to be codified differently and the save feels punitive. I’d prefer at least the shield AC to the save…

Fans of swashbuckling (and Razor Coast) may like to hear that the bind maneuver also receives some love here. Also interesting would be an all-or-nothing feat – as a full-round action, make one attack at +4; If you crit, you automatically confirm. however, until the end of your next turn, you take a -4 penalty to AC and may only take a standard action. This feat has quite some potential! Alas, not all of the feats have solid wordings – the Pirate Trick-granting feat, for example, manages to get quite a few things wrong, duplicating effects that can be achieved otherwise via less solid rules and non-scaling DCs. Not good designs, though I like the concepts. Dealing non-lethal damage with sword-pommels is neat, while Reckless Attack is broken – at a -2 penalty to AC, make a single melee attack – if you hit, you threaten a crit automatically. Prereqs: Str 13, Power Attack, BAB +1. Yeah, never gonna happen near my table and needs to be redesigned from scratch; At low levels, there’s no reason ever to not use this feat and with crit x3 or x4 weapons, it becomes ridiculously broken, outclassing keen, improved critical et al – the whole trees. Yeah. Urgh. Rest assured that this is the exception, though.

Editing and formatting are good – I noticed no particularly nasty glitches in here. Layout adheres to Purple Duck Games’ printer-.friendly two-column b/w-standard and the pdf comes fully bookmarked for your convenience.

Perry Fehr and Sean O’ Connor’s final contribution to the Player’s Options-line is thankfully one of the better in the series – the archetypes for classes of Path of Power and the content for the core et. al-classes actually is rather solid and the new items and feats more often than not hit the mark. The PrC is solid as well and while yes, this pdf does have some broken components that preclude it from being a “allow blind”-file, it does have some cool ideas and a very low, fair price-point. The amount of problematic content is lower than the cool bits and pieces and hence, I will rate this as 3.5 stars, rounded still down, though -the issues that are here need some help before this is “good”, but I can see quite a few of the bits and pieces here show up in the final book!