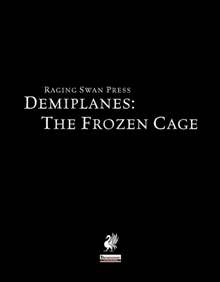 The demiplane know as the Frozen Cage is…surprise: A cage! *cicadas chirp* Yeah, I know. So an ancient, daemonic evil has been imprisoned Now, a recent incursion of the vile crusaders of the shattered sky has almost brought down the defenses of the Wardens of the Frozen Flame, guardians tasked to ensure that dread Shektelmatu remains bound.

In the frigid, lavishly mapped wasteland, which may have regular gravity, but also enhanced cold/diminished fire magic and dimensional lock effects, a table of 50 entries of dressing provides frigid bones and remains of ancient battles to stumble across. emerging in the ruins of a temple, the PCs will probably be spotted by the dread host that seeks to unleash damnation – and the guys may actually want to parlay. while their leader is an insanely powerful antipaladin, the PCs may yet be fooled…or coerced. The potential for a frigid cat and mouse game in the planar tundra definitely is there!

Broken Bulwarks haunted by the living dead, flaywind bilzzards that may skin you alive, ashen grey fields of necromantically charged snow – the locations herein are iconic and pretty much can be read as a best of the environmental shenanigans of the classic Frostburn tome. Have I mentioned the fully depicted legend provided herein?

Editing and formatting are top-notch, I noticed no glitches. Layout adheres to Raging Swan Press printer-friendly two-column b/w standard and the pdf comes fully bookmarked for your convenience. The original cartography for the supplement is cool and the pdf comes in two versions – one optimized for screen-use and one for the printer.

Robert Brookes’ second Demiplane is once again one I’d definitely use – it’s concise, the cartography is awesome and the theme and style suit my tastes very much – in the hands of a capable DM, this can be a very interesting combination of the frigid wasteland/undead battlefield tropes and fans of “A Song of Fire and Ice” – well, this could be considered an amped up, contained version of the North and its basic conflict. That being said…the Twilight Demesne has raised the stakes very high and while this demiplane is awesome, it is also much less versatile – it’s a pretty much straightforward conflict with cool terrain and nice background thrown in the mix and does not lend itself to its predecessor’s versatility. hence, my final verdict will omit my seal of approval by a margin for a final verdict of still awesome 5 stars.

You can enter this cool (haha! – ouch, yeah, I’ll put a buck in the bad pun jar…) demiplane on OBS and here on d20pfsrd.com’s shop!