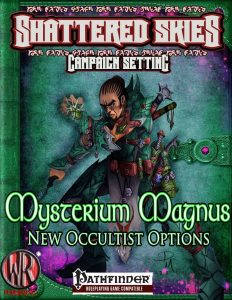 All right, we begin with an array of occultist archetypes, the first of which would be the plague bearer, who is locked into the necromancy implement school at 1st level, as well as being obligated to take that at 20th level. This is called tumor implement and seems to imply that you have a special tumor implement, blurring the lines between implement and implement school, which is problematic as far as I’m concerned – can the tumor be lost? I assume not, but I am not sure. 2nd level yields +1/2 class level to Heal checks and critical hit damage rolls with melee weapons. Okay, got ya. Is the bonus damage multiplied or not? This replaces magic item skill. 4th level adds a couple of thematically fitting spells to the necromancy implement school. No, they are not properly formatted.

The noir sleuth is proficient with simple weapons, one martial weapon, light armor and shields, excluding tower shields. The archetype is locked into divination as one implement school and as 20th level’s implement mastery. Instead of 2nd level’s Magic Skill, the archetype receives 1/2 class level as a bonus to Perception and Sense Motive. Instead of Shift focus, the archetype can spend mental focus to add a 1d6 surge benefit to Perception or Sense Motive checks, with 6s exploding – i.e. when you roll a 6, you roll again and add the results together.

The possessed occultist is basically a medium-crossover: He loses one implement, but depending on the implement school of the chosen implement she has, she gains the séance boon and lesser spirit power, with immediate and grater spirit power unlocking at 10th and 20th level, respectively. The profane puppeteer is the first archetype that is more complex: these guys gain an at-will ventriloquism (not properly italicized) and Craft (puppets) as well as Perform (puppetry) as class skills with +2 profane bonuses. The puppets come with concise formula for crafting and costs of the process. The puppets are fashioned after summon monster creatures and 4th level and every 3 levels thereafter increase the array of available summon monster options. Problematic: The puppets are treated as constructs, got ya – but this does mean that the puppets do not have the stats of the monsters and instead have construct stats…so what stats do they actually have? No idea. This is non-operational. Puppets require mental focus to animate and can channel focus powers, but must remain nearby. Also non-operational: The hard cap of how many puppets can be maintained at any given time – it uses summon monster as a point of reference. The ability replaces resonant powers.

Silver gunners gain proficiency with one-handed firearms and must choose transmutation as an implement school, using the firearm as the implement, and only gets this one school at first level, but later gains the normal implements. When attacking with the firearm implement for the transmutation school, the bullet is treated as silver. They also gain Amateur Gunslinger and Gunsmith and use Intelligence as governing attribute for grit. 2nd level replaces object reading with the ability to smell nearby lycanthropes and gaining skill as well as atk and damage bonuses versus them.

I already covered the sinister savant in my review of the cult of the colour from out of space, but for completion’s sake, here’s the archetype’s breakdown: At 1st level, the occultist replaces occultist implements with the ability to use magical books and scrolls as implement focuses, provided they contain a magic or effect related to the implement school to be emulated. The lack of implement schools means that the archetype has also modified resonant power: Whoever reads the implement in question gains a +2 bonus to Knowledge for every 2 points of mental focus invested, with a maximum of 2 +1 for every 2 occultist levels.

Reading an implement takes 1 round – valid, considering the benefits conveyed. At 4th level and every 4 levels thereafter, the character has a 50% chance to receive a random insanity and also learns 1 level-appropriate spell from the implement schools known, replacing shift focus. As a capstone, the character receives full information on a CR 20+ creature of doom and may extol its horrid powers, potentially causing panic. The powerful diversity of the variable access to diverse implement schools is offset a bit. However, at the same time, the archetype has a few formatting hiccups – spells not italicized, wording that could be a bit more precise…but it remains a functional option.

The vile conduit receives an evil aura and may not cast good spells; starting at 2nd level, object reading is replaced with the ability to interpret the words of outsiders or aberrations via Craft instead of Linguistics – the more time is spent, the easier the task becomes. Those witnessing the resulting objet d’art can understand the message of the entity – and guess what: I really like this ability! It’s flavorful and interesting! Starting at 5th level, these objects may be used as implement focuses for any known implement school, but associated resonant powers must be chosen at the time of artwork creation and thereafter remain fixed. This replaces aura sight. Of all the archetypes herein, this is the one I consider very flavorful, unique and amazing, so kudos to the author of that one!

The pdf also features a new colour from out of space implement school, which uses leaves, roots, hair or similar material. As a resonant power, the implement provides unnatural growth to a creature, which then, after being activated as a standard action, for class level rounds, exhibits the unnatural growths providing +1 to atk and damage per mental focus invested in the implement. This bonus is not applied against the occultist and after the duration has elapsed, the creature takes class level times d6 damage. There is a Fort-save to negate, but it does not specify the DC – does it scale with focus invested? Another idea and sensible option would be to use the focus power’s save DC as reference. Speaking of which: The focus power would be eyes of lassitude, which, as a swift action nets an ennui-causing gaze that prevents travel and penalizes Will-saves. Break enchantment (not properly italicized) can end the effect on a successful CL-check. Additional focus powers include a scaling, disintegrating touch attack (yep, requires mental focus) and a full-round mental focus-expenditure-powered short-range Cha-damage that also yields temporary hit points. Apart from the minor glitch mentioned, I like this one and the implement spell list is also solid.

The pdf features new focus powers for the “color out of space and necromancy implement schools”…which brings me to a nitpick that will not influence the verdict, but to me, the colour from out of space feels more like an implement, less like an implement school. But yeah, that’s nitpickery and will not influence the final verdict. Anyways, one lets you spend mental focus to make a nearby creature sweat blood, taking bleed damage, with higher levels forcing the creature to drop items and become sickened. Another one yields a kind of mental focus based pseudo-Leadership (or upgrade for it).

There is also an ability to mark dead bodies…which has no precise benefit other than fluff. There also is a confusing gaze, a mind-affecting short-term paralysis curse, shadowy pseudo-shoggoth tentacles that grapple those nearby and cause Con-damage, mental focus based zombie creature summoning, a short-range drain of the Ashen King, or the option to prevent proper rest. There also would be a touch that may have those afflicted rise from the dead, sharing temporary confusion, a scaling stoneskin-like DR-shield – there are some amazing gems here, but the different authors and their differing skill-levels become readily apparent as well.

Touch of the Old Ones features, for example, a lowercaps attribute, references “willpower” and deals massive Wisdom damage for the cost, exceeding in power the other options presented herein. In direct comparison to more precise options herein, it looks sloppy. Stunning foes is also one of the options, as is exhausting them. On the plus-side, I really liked the high-level power that causes target creatures to lapse into colour-fed berserker rages and after that, suffer negative levels.

Editing and formatting can no longer be considered to be good – there are quite a bunch of missing italicizations, incorrectly formatted pieces of rules-languages and the like. Layout adheres to a 2-column full-color standard with nice full-color artworks. The pdf has no bookmarks, which, in conjunction with an inability to copy text from this file, makes the use of the pdf pretty inconvenient.

This pdf is the work of a bunch of designers: Robert Gresham, Angel “ARMR” Miranda, Simon Munoz, Thiago Rosa and Rodney Sloan made this pdf…and it kinda shows. The archetypes mostly are cookie-cutter modifications that play it safe and lack truly unique selling points…but the pdf actually does offer some cool options. I generally really like the colour-implement school and the powers featured, for the most part, are pretty cool and flavorful. At the same time, the quality of their rules-language fluctuates somewhat, making me really wish that a competent rules-dev or editor had streamlined them, also regarding their power-levels. In short, this is pretty much the epitome of a mixed bag. There are some gems to be found for experienced GMs, but I wouldn’t hand this over as is to my players. The gems do make this worthwhile, but I can’t go higher than 3 stars for this one. Without glitches, this would have been a solid 4 or 4.5, perhaps even a 5-star offering.

You can get these options here on OBS!
Endzeitgeist out.