EZG reviews the Midgard Player’s Guide to the Wasted West 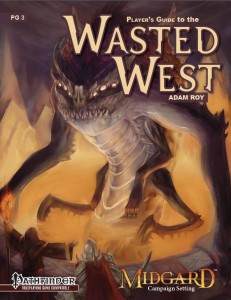 This player’s guide for the Midgard-setting is 33 pages long, 1 page front cover, 1 page editorial,  1 page SRD, leaving us with 30 pages of content, so let’s dive in!

As has become the tradition with Midgard Player’s Guides, we kick this book off with a fluffy, player-friendly introduction to perhaps the most feared region of the world of Midgard, the desolate wastes spawned from an arcane cataclysm, where Great Old Ones trudge eldritch symbols in slow-motion into the blighted plains, slowed and perhaps sleeping, but unvanquished as their warp and taint spreads even through the complex bonds that hold them. The Dust goblin-inhabitants and their major tribes as well as three Great Old Ones also get a short player-friendly write up, as do 3 of the strange plants that can be found in these wasted fields. the Seat of Mavros, god of war (including a table for battle blessings) are introduced alongside the Magocracy of Allain and we even get a neat full-page full color map of the city of Maillon before we leave for the haunted lands of the giants, where not only the eponymous creatures dwell, but where lizardfolk adorn their sacred black cypress with shrunken heads…

After this disturbing journey, we’re off to the crunchy bits and 35 traits await for the choosing and mostly, they are known fare – bonuses to saves, skill-checks, class skills etc. – though some vril-themed ones are neat and riding boars and swine is cool – if you didn’t guess: Humanoids, more savage PCs and goblins especially get a rather extensive selection here. I’m also happy to report that I didn’t consider any of the traits overpowered – not even the sinister one that allows you to 1/day sacrifice a sentient creature of equal of greater HD than you to gain +1d3 to an ability score for 3 hours.

Feat-wise, we get 12 new feats, which range from lame filler à la +1 to CMD and CMB to an okay item creation-feat that allows you to create charms to a feat that enables you to recall a spell of two levels lower than you can cast once per day. Feats to enhance slightly fire damage, better tracking versus creatures with the realms beyond or alien subtype, but not aberrations! The Alien-subtype…Wait. There is no alien subtype. Neither is there a realms beyond subtype. So which creatures do net the bonus? That’s another issue I have with multiple pieces of crunch – most instead refer to “keywords” – a not truly defined term. Would mothmen, for example, count for the purpose of these abilities/feats? Why not simply make it aberrations and be done with it? This needlessly complicates what should be simple, not too exciting abilities. Or take the “Rebel of Allain”-feat: +2 to saves versus spells or effects with the “illusion, charm or dominate keywords”. Ähm, ok, does Phantasmal Killer count? I know I’m nitpicking here, but these feats NEED clearer definitions – their focus is wobbly at best and when providing feats for uninspired +x bonuses, I’d at least expect to get concise definitions of what the bonus applies to. Sorry, but at least to me, the feat-section is uninspired, boring and fails to properly codify what the bonuses apply to.

I gushed about heritage feats in my  review of the “PG to the 7 cities” and this time, we get 6 of them –  most of them themed around the void beyond and netting spell-like abilities usable once per day – whether it is blink, invisible, entropic shield once per day or augury once per day. Unfortunately, the feats e.g. mention a “feat bonus”, which at least via standard-rules does not exist. Speaking of which: getting less damage from energy is usually not called DR (as in the feat), but resistance. Faulty nomenclature is simply not helping here. Unfortunately, these heritage feats also feel a bit unbalanced and honestly, I’m not sold on them either, though at least they’re not as bland as the regular feats.

After that, we’re off to the new archetypes – first of which would be the Wasteland Summoner: These summoners can leech off the life energy of his eidolon, have his/her eidolon 1/day cast a spell as a spell-like ability and even temporarily borrow evolutions and later even split eidolons and incur ability damage to enhance his/her eidolon. We also get a new base form as well as 4 new exclusive evolutions. Magi may now opt to become Feywardens of Tintager that gain intelligent midnight blades as well as several abilities centered on fey and combating their tricks. Clerics may now become militant members of the order of Mavros, who sacrifice their channel energy  for a variety of diverse effects like smiting wielders of the power arcane. Watseland Seekers (rangers) get a mostly boring archetype with a problematic ability: Automatic total concealment versus ranged attacks in wastelands and deserts? Depending on your campaign, that one’s a game-breaker. Wasteland Druids don’t get any proper nature bonds, but may choose some sinister domains and may use empathy with swarms and vermin – and that’s just one of the neat abilities of this particular archetype. Wizards may opt to become Warmages of Tintager, with access to the Iron and Fire School and 2 arcane discoveries. Witches may now opt to become Servants of the Realms Beyond  with 2 hexes, 2 major hexes and 2 grand hexes as well as 5 new familiars and 5 improved familiars.

Sorcerors can choose from one of 4 bloodliens: Ghoulish, Realms Beyond, Goblin-Blooded and Giant bloodlines. The Ghoul bloodline is nothing to write home about, but solidly designed, but the Realms Beyond bloodline once again is rather neat. The goblin-blooded  bloodline is not as interesting and the giant bloodline would once again constitute an interesting take on the concept. We also get 3 new cavalier orders: White Knights are the defenders of Bourgund and may use retributive arcane  attacks, intimidate foes and dimension door at high levels with a cool-down. Knights of the Black Rose don’t serve Lord Soth, but rather are the defenders of Tintager – they are particularly fearsome and deadly in the saddle and against fey. And finally, there are the boar-riding goblin cavaliers of the wastes – and these guys win for both the cool imagery and the neat execution.

Next up, of course, are the obligatory spells, this time netting us 4 new ones:  Summoning a whole goblin tribe, conjure a darkness that can’t even be penetrated by darkvision, blast foes with laser-like annihilation rays as well as a spell to traverse the wastes more easily – these spells are universally winners.

The final page of the product features an animated hangman’s knot (AWESOME!) and e.g. animated shrunken heads that can be consulted – 4 items, all cool, nothing to complain here.

Editing and formatting are good, though not perfect – I noticed some flawed usages of rules language in the pdf. Layout is beautiful and adheres to the 2-column full color standard and both the b/w-artworks and the map are superb. The guide comes fully bookmarked for your convenience.

The fluff is superb, as are the spells and magic items – but the crunch is of a varying quality – faulty rules-language, mostly bland traits, filler feats – whereas the majority of the archetypes, especially the glorious summoner archetype are awesome. In the end, it is this varying quality that hurts this guide the most – all in all, a solid product that fell short of what it could have been with slightly more inspired content and a tighter rules editing. Hence, my final verdict will clock in at 3.5 stars, rounded down to 3 for the purpose of this platform.

You can get this neat, if not perfect Player’s Guide here on OBS!