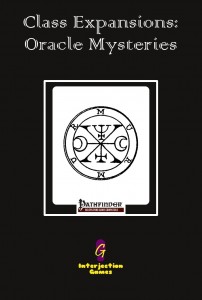 This installment of the Class Expansions-series is 4 pages long, 1 page front cover, 1 page SRD, leaving us with 2 pages of content, so let’s take a look, shall we?

As you could glean from the title, we get new mysteries in here, both of which are introduced with some aptly-written prose before we delve into the respective crunch. First of which would be The Cacophony, which immediately made me flash back to Demons & Wizard’s “Touched by the Crimson King”‘s introductory Discordia-chanting – alongside the fluff-text evoking the concept of Vestiges as a nice nod for aficionados of pact magic, we’re off to a good start. A total of 10 revelations are provided and they are interesting –  you could e.g. choose to being shaken or confused, instead of their usual effects taking only a -2 to saves while subjected to the condition. Another interesting revelation would be to take 20 on any knowledge-check 1/day +1 time at 5th level and for every 5 levels after that, but at the cost of becoming helpless and catatonic for 1d4 rounds. Also mechanically interesting – roll d10 in addition to your initiative – if even, add the result to your initiative, if odd, subtract it. At 10th level, you get +10 to movement rate in the first round when rolling even and are considered flatfooted in the first combat round – but unfortunately, the revelation fails to specify whether this replaces the original effects or is an additional effect – I assume the latter, though I’m not sure.

Emitting a mind-shattering scream feels a bit underwhelming in comparison with its sonic damage and confusion effect, dealing 1d4 points of damage per class level. Unfortunately, without specifying whether a successful save negates only the confusion or also the damage AND without specifying how long the confusion lasts – rendering this revelation completely unusable as provided.

Cha-times per day, oracles of this mystery may also evoke Non-Euclidean geometry as a swift action, rolling 2d10 instead of d20 (botching on a natural 2) on their next roll – and when faced to roll multiple times and take the highest or lowest result, you roll +1 die and take the stated number +1, essentially getting better results on forced rerolls. You may also become partially immune to frightful presences, may project frightening visions into foe’s minds, be more susceptible to select negative conditions at the price of getting better at inflicting them and cause foes (and yourself) to become shaken upon a touch attack. As a capstone, you may confuse foes by intimidating them and get a DR while shaken or confused.

The second mystery would be the Perfect Bacon mystery – and it’s playfully insane: You search for the divine bacon! Again, we get 10 revelations, with one being not properly printed in bold. Tracking animals (especially well when hungry) and intimidating animals and magical beasts would be two options, as is the option to create healing bacon 1/day that works as a potion. This bacon may even heal the undead, and here a glorious chance is lost – since the ability allows for the intimidation of creature-types the meat was taken from, an undead evil butcher of men would have been awesome and disturbing, but the limit on animals and magical beasts impedes the ability’s usefulness. You may also damage organic foes (sans exoskeletons) with deadly bacon salts, grease yourself (and fall prone to create slippery terrain!), light foes ablaze via fire and electricity damage, gain a bonus to constitution while not starving, heal those you forage for faster, summon clouds of deadly cutlery and grease foes to make them likely to fall when moving fast. The final revelation makes you immune to hunger, nets you DR 5/magic and allows you to squeeze into small places.

Editing and formatting are not perfect – I e.g. noticed an instance of an ability-header not being bold when it should be, but nothing particularly irksome. Layout adheres to Interjection Games’ elegant no-frills 2-column b/w-standard and the pdf has no bookmarks, but needs none at this length.

Author Bradley Crouch knows how to create weird content – and mostly, this pdf provides some nice options for oracles, though ones that imho are a bit on the conservative side of the power-scale. Additionally, honestly, the wording could have been a tad bit more concise here and there and the instance of one revelation not working as written further detracts from this pdf’s appeal – though not by too much. Hence, my final verdict will clock in at 3.5 stars, rounded up to 4 for the purpose of this platform due to the low price and uncommon ideas behind most of the abilities herein.

You can get this neat oracle-supplement here on OBS and here on d20pfsrd.com’s shop.