Trail of the Apprentice II: The King’s Curse

Trail of the Apprentice II: The King’s Curse 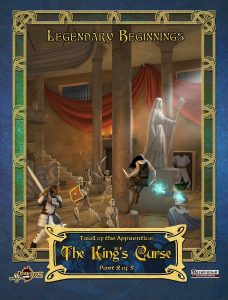 The second installment of Legendary Games’ Trail of the Apprentice adventure arc clocks in at 50 pages, 1 page front cover, 1 page inside of front cover, 1 page editorial, 1 page ToC, 1 page SRD, 2 pages of introduction, 1 page advertisement, 1 page inside of back cover, 1 page back cover, leaving us with 40 pages of content. The pdf does come with an art and map folio, which presents no less than 20 pages of artworks that you can print out for handout purposes, with most maps coming in multiple iterations – including grid and grid-less versions. The maps are player-friendly and in neat full-color – the variety provided allowing for easy use in any game. This is AMAZING and honestly, I think it should be industry-standard.

All right, when last we left our heroes in the making, they were en route towards the city of Fairglade, which is fully depicted for the convenience of the GM in the appendix – and yes, a map of the place is included, as is a proper settlement statblock. It should be noted that, if the first installment in this series was GMing 101, then this module begins introducing the finer aspects of the craft. Copious amounts of helping sideboxes and elucidations on the structure behind the environments similarly help new GMs run the best game they can, though this already requires a bit more preparation and improvisational skills than #1 – which is good, for we need to have a learning curve. The module, much like #1, should be appropriate for all but the most squeamish kids of age 8+.

All right, so this is pretty much as far as I can get without SPOILERS. Potential players should jump to the conclusion.

All right, still here? When last we left the heroes, they were en route towards Lord Mayor Wolfe with a sealed letter of recommendation, hopefully to thwart the theft of a second serpent statue. Fairglade requires, just so you know, the peace-bonding of weapons (rules and troubleshooting provided) and the module begins with the PCs introducing themselves to Lord Mayor Wolfe and receiving a tour of his fabled, fully mapped museum – veterans will want to take in the sights of the tour and anticipate where this is going…

This type of social encounter does offer some serious roleplaying potential and the pdf sports, in copious details, the respective cultural treasures accumulated by the Lord, including in many cases, proper color artworks to show as handouts. During this tour, the PCs have ample chances to impress the lord with their knowledge, though even if they treat him badly or show no interest, the GM is covered with an alternative hook – the main thing to take apart from the tour and the inspection of the museum thereafter would be that it was secured rather well and that the PCs should find themselves employed to determine the identity of the culprits.

This leads into the first investigation of the campaign – the PCs are off to explore the city and find the thieves – with each quarter having its own modifiers. The detailed explanation of how this interaction between settlement and PCs, this slightly increased abstraction level works, is most certainly welcome and should allow novices to run this section smoothly.

As is the trope with such investigations, running afoul of the city watch (and potentially ending in jail/needing a bailout by the lord) and dealing with thugs (encounter map provided) will set the PCs on their trail. My criticism towards module #1 alas, as is repeated here – the final thug doe throw down his weapons, but PCs are not rewarded for not killing the thugs. The criminal points them towards their first lead, however – word is that the infamous thieves guild Elverin Skulk has been hired for a big job. The PCs can soon find their safe-house, where some junior officers and the gargoyle spike make for a challenging encounter. Spike the gargoyle is also where the PCs and GM learn about DR, how to handle it and how to tweak it, if required – in the aftermath, the PCs will find plans that show a tunnel onto museum grounds.

However, upon their return to the lord, they will realize that their task is not yet finished – the museum was broken into…AGAIN. The lord wants to PCs to explore the tunnels and deal with the threat, preferably sans involving the city guard. It is hence that the next section of the adventure begins, as the PCs explore the sewers and duke it out with hissing giant centipedes and even a wererat – which is where diseases, environmental considerations and handling lycanthropy and its cure are explained to the GM. It is also where undead are first introduced, which seems at odds with the child/young players focus…however, the pdf does provide ample advice on depicting the living dead while mitigating the chance for nightmares…kudos!!!

This would also be a good spot to have the PCs rest – such intermission spots are clearly denoted within the pdf. This is where the climax of the adventure begins, as the PCs enter the museum once again – and if they paid attention to the lord in the beginning, they will have an easier time here: You see, the undead rising are the result of a ruby stolen from the sarcophagus of King Udimmu. Returning the ruby to the dead king, a powerful mummy, after or while dealing with his skeletal retainers will end the king’s curse that has taken a hold of the museum and reward them with the mummy showing his gratitude, making the living dead even less creepy and rather relatable. Oh, and PCs that took heed during the initial museum tour will have an edge here, even beyond the solution being more simple.

The curse is lifted, but the theft remains unresolved…and this is where we’ll return in module #3.

Editing and formatting are top-notch, I noticed no significant glitches. Layout adheres to a beautiful two-column, full-color standard. The pdf comes fully bookmarked and the pdf sports a lot of nice full-color cartography and artwork, though fans of LG will recognize the sarcophagus artwork, for example.

Paris Crenshaw’s second installment of Trail of the Apprentice is the logical progression of teaching GM skills and does a great job handling and navigating the challenges that running a game for young players sports. Unlike the very atomic roleplaying experience #1 sported, however, this book focuses on teaching the ROLEplaying aspects of the game more so than the ROLLplaying aspects – and it succeeds in that endeavor. The module allows a GM to come to grips with adventuring in a city, longer social encounters and is less of a hand-holding experience than #1. While this makes it slightly harder to GM (particularly, there is less read-aloud text), the progression is natural and required. More importantly, this module is fun for players of all ages. Where module #1’s atomic experience will not excite any veterans, this very much can provide an easy, yet fun module for older players as well. Depending on the dressing and your narrative prowess, you could conceivably reskin this module’s benevolent tone to be quite grim, should you choose to do so. That being said, this would be at odds with the relatively easy difficulty.

I am rambling, I know. In short – this is superior to #1 and makes for a well-crafted second part of the saga that teaches the skills that made us stick with the game: Changing tactics, roleplaying and making an impact. The fact that doing the right thing resolves the finale also adds a nice touch of morality to the proceedings, even though I still wished that dealing with intelligent foes in a nonlethal manner was properly covered/rewarded – I most certainly suggest to any GM to do exactly that.

How to rate this, then? Well, the module, as a whole, is a fun, if not necessarily perfect experience and as such, it receives a final verdict of 4.5 stars, rounded up due to in dubio pro reo.

You can get this nice module here!

Prefer 5e? While my review is based on playing the PFRPG-version, the 5e-version can be found here!

Want the whole series? That book can be found here for PFRPG!

You can find the whole series for 5e here!