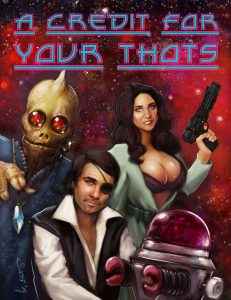 This supplement clocks in at 20 pages, 1 page front cover,  1 page editorial/back cover, leaving us with 18 pages of content, so let’s take a look! Wait, why supplement? Because, while there is a module included here, it’s not the central focus – the main meat of the module is devoted to rules and help for prolonged Alpha Blue games.

As far as rules are concerned, unsurprisingly, the system employed is the dice-pool based VSD6-system in its Alpha Blue iteration, which, by now, has grown to be perhaps the best of the VSD6-variations. The supplement does contain the Blue Balls Tracker, a handout-style page where you can check the effects of abstaining – in Alpha Blue, not having sex will have serious negative repercussions.

The module begins with a  discussion about strategies to keep Alpha Blue from being a one-trick pony, and then proceeds to introduce the MeowMeowRating (MMR) – this represents general creditworthiness/Charisma and is rolled as a d%; female lifeforms get +10. A MMR-rating may be checked from up to 30 ft. away with the wristbands most people have. Here’s the thing: Having sex with a being with MMR 50 or more points lower than you makes the MMR go down by 1. If you have sex with a being with an MMR 50 above your own, your MMR increases by 1. Leveling up nets a +1d4 increase of the MMR – 2d4 if you’re rich. +25 MMR may be bought on the black market, with at least a 25K credits-investment.

As an additional variant rule, good and non-so-bad-it’s-good-bad pick-up lines add/detract a d6 from the die pool. The supplement also features a table that provides bonuses and penalties to the attempts to score, depending on intoxication, introductions by mutual friends, winning altercations you didn’t start, etc. There is another 6-entry table that provides a quick resolution, if the above seems to complex – this table can also be used in conjunction with the former pool array, making everything less reliable, which is per se good, but which can also end up as potentially frustrating.

Okay, this covers the variant/additional/optional rules presented herein – next up is the scenario presented within. As always, the following contains SPOILERS. Potential players should jump ahead to the conclusion.

Okay, only BDSMs around? Great! So, The Pink Sewer on Tanis 5 is where all Thots go after being processed – not really a prison, but more like a community center with armed guards. The massive bureaucratic overhead of the federation does mean that a lot of thots sentenced for tax fraud have been waiting…and waiting…and rumors of corruption abound.

Tanis 5 is protected by a plasma field that disintegrates everything on contact, but an interdimensional drive might just be capable of bypassing it – and the PCs just so happen to know someone one Nondol Haze (table with 6 reasons for knowing the guy provided). When the PCs arrive at Nondol’s place, they will have to deal with fully statted Andrazi droids. En route towards Tanis 5, the PCs get an alert about unregistered Thots at a bachelorette party that focuses on anus hyper-pigmentation – an inverse bleaching, if you will. The ladies are entertained by a wooky, and unless the PCs want to fight the fully-statted centurion droids, the best way inside will be disguising themselves as dancers. Oh, and the two Thots are actually pretty unique and interesting mechanically.

Editing and formatting are very good on a formal and rules-language level. Layout adheres to the neat two-column full-color standard of the series, with white text on colored background – and it surprises me time and again that this doesn’t trigger my migraines. Artworks, as mentioned,a re color photographs that never exceed clothed pinups in raunchiness. The pdf, oddly has no bookmarks, which is an annoying comfort-detriment. The pdf has no cartography, but doesn’t necessarily need it this time around. The Blue Ball tracker (which is a cool tool to make Alpha Blue more mechanically rewarding) is also included as a proper png – the updated blue balls tracker is a very good reason to get this supplement if you enjoy Alpha Blue.

Zoltar Khan Delgado’s third Thot-supplement was a bit of a surprise to me – where the previous two had focused on delivering adventures, this one is, for the main part, a brief vignette prefaced with a lot of rules. The rules have in common that they enrich the game and reward the player characters for behavior that fits the tongue-in-cheek tone of Alpha Blue. I genuinely liked them as a whole. The premise of the brief adventure vignette is per se promising, but could have carried SO MUCH MORE: With all the stuff going on Twitch etc., this could have been a really rewarding supplement lampooning all the recent controversies, but instead restricts itself to the basics. The stats are appreciated, and I like what’s here, but this could have done so much more.

That being said, rules-wise, this should be considered to be a must-own for Alpha Blue fans, though one that drives home a very important note for the longevity of the game: Alpha Blue needs a revised edition. At this point, the best rules are spread throughout modules, adventures, etc., and the game is becoming a bit spread – having a revised core book that makes full use of the cool rules additions added over the years would imho really help the game. But that may be me. Considering the low price-point, I can recommend this as a supplement – if you’re 100% happy with Alpha Blue as is, or if you’re looking for just a module, this may be less what you’re looking for. The rules are great, the adventure cool, but too brief to capitalize on its ideas properly. All in all, my final verdict will be 4.5 stars, rounded up due to in dubio pro reo.

You can get this supplement for Alpha Blue here on OBS.

If you want to support what I’m doing, please consider leaving a donation or joining my patreon here.