Faces of the Tarnished Souk: Khufusiris, the Crooked Sleuth of Unfathered Sin 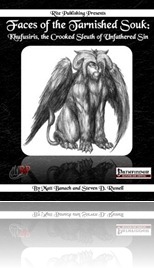 This installment of the FoTS-series by Rite Publishing is 13 pages long, 1 page front cover, 1 page editorial, 2 pages of advertisements and 1 page SRD, leaving 8 pages for the 3 incarnations of Khufusiris, so let’s check them out!

As with my other recent reviews in the series, I’m going to start at the back and move forwards towards the high-CR-incarnation.

Khufusiris begins play as an advanced criosphinx with the primordial simple template (CR +1) applied and CR 9.

His mid-level incarnation is CR 13 and further adds the riven magic template (CR+2, included as well) and becomes able to break magic items , drain spells and be immune to magic. Ouch!

Finally, his CR 17 high-level incarnation also gets the betrayer-template (CR +1). The write-up of the template in this pdf unfortunately lacks the CR-information, though. I found the CR+1 in the excellent Book of Monster Templates by RiP.

An uncommon combat power-house, Khufursis, the dopey-smiling sphinx actually turns out to be a paranoid, delusional creature in its one-page fluff-write up and as always, the sphinx comes with full information for dreamburning as per the rules introduced in CM.

Additional content is provided as well – 3 spells (one enhancing stealth, a phantasmal pit and the high-level illusion treacherous phantasm, which can’t even be broken by true seeing, as it clouds the mid of the victim. Oh, and there are feats: A lot of them: 7 feats are included in the deal and make the sphinx and interesting combatant to say the least – a combination of combat and monster feats makes sure that the creature can bluff and power attack like crazy and subvert the defences of its unwitting allies.

My favourite piece of original content, though, would be the huntsmen’s Sigil: Auberyon and his best artists created this tattoo and it shows: Apart from some rather devious abilities, the sigil also makes it VERY HARD to land a killing blow against its bearer – an uncommon, cool and innovative legacy item that makes for an awesome price, should its bearer ever be vanquished.

Editing and formatting are very good, apart from the missing CR-information in one template, I didn’t notice any glitches. The pdf adheres to RiP’s old rune-bordered layout and comes with full bookmarks. The b/w-artworks are fitting. The authors Steven D. Russell and Matt Banach (Justin Sluder for the first time not being part of this installment) have created a rather interesting installment of the series – while the creature is interesting, it features no class-levels and all its power stems from distinct templates, items and feats, which is nice to see for a change. In fact, the feats and the sigil per se make up for the truly interesting components of the creature. Khufusiris does what he sets out to do, but nevertheless a distinct feeling of unrealized potential constantly gnawed at me and after careful consideration, I realized what it was: The motivation. The sphinx is a betrayer and survivor, yeah, but with some modification of the background, perhaps some additional pieces of information, the sphinx could have become a truly multi-facetted being, whereas the status-quo makes the beast feel rather one-dimensional and offers no true possibility of redemption/trauma that would explain its opportunistic paranoia. Thus, due to this and the minor hick-up in the table, I’ll settle for a solid verdict of 4 stars – a good installment of the series, but not one of its admittedly mind-boggling peak-performances.

Faces of the Tarnished Souk: Khufusiris, the Crooked Sleuth of Unfathered Sin is available from: