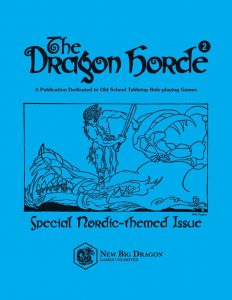 The second installment of the Dragon Horde-‘zine clocks in at 36 pages, 1 page front cover, 1 page editorial, 1 page ToC, 3 pages of advertisement (one inside the ‘zine), 1 page back cover, leaving us with 29 pages of content, so let’s take a look!

This review was requested by one of my patreon supporters, to be undertaken at my convenience.

Okay, so first things first: The title is not a typo – it’s a pun, and the editorial confirms as much. Without much ado, we dive right into the first article herein, which depicts linnorms, 6 types of them, to be more precise. These list their respective bites, breath weapons and special abilities properly, but spell-references here are not set apart. That being said, we get full stats for them in both 0e/1e and B/X, and age categories note increases in HD and number of limbs – these also are used, in a rather clever manner, to govern the number of attacks they can field, their speed, etc. Some purists may scoff at breath weapons not being based, damage-wise, on Hit Points, but since they’re linnorms and not regular dragons, this may be actually an intended design choice to set them apart. As a whole, I very much enjoyed this iteration on the dragons, though I freely admit to being spoiled by newer games – I can’t help it but feel that draconic foes need more tricks up their sleeve. The absence of death curses also was a minor bummer, but consider this being me complaining about a perfectly fine and FREE take on the concept.

The next article is a perfect reason to download this ‘zine on its own – adapted from Rudolph Keyser’s work (I particularly recommend “Norges gamle Love indtil 1387” and the enlightening “Speculum regale: Konungs Skuggsjá”), we have a great two-page article on how Viking longhouses work – including a nice b/w-map. I’d have loved to get that map in a one-page-version, but having one? Super helpful. As someone with a degree in Scandinavian Literature and Culture, I consider this article at least to be required reading for authors attempting to depict Viking-related culture. Informative and immediately game-relevant. Two thumbs up! There also is a handy one-page explanation of using the þing, which, while basic, is similarly super helpful for GMs not too familiar with the ways of the North.

The pdf then presents the Völva (plural völur) NPC character class – part seer, part shaman, part jarl/kingmaker, the travelling ladies use Wisdom as a prime requisite, fights as a magic-user, but saves as a cleric. They have d4 HD and may not wear armor or carry a shield. The völva may only use her staff, and must have at least 9 in Intelligence and Wisdom. Cool: They do not have to memorize spells, instead using Seiðr, Spá-craft and Galdr, choosing freely from all available spells from her list each day. Higher levels yield shapechange, and they use the B/X-dwarf’s XP-progression and may gain up to 14 levels. The crafting of runed items is also cool. I really like this class, but there is one thing that bothers me – the custom spell lists include perfectly serviceable summaries of spells, but these do not come with the proper spell-formatting for B/X. Still, I’d allow this, and if you’re playing B/X or its current Old-School Essentials iteration, check this out!

The book also has a cool little article that proposes a wide variety of alternative means to deal with Level Drain: From temporary drain, to XP, to aging etc., there are plenty of interesting options here – that all have in common that they’re less annoying and cumbersome than the default, so once more – kudos!

Now, one of the advertisements of the ‘zine s for William Morris’ “The House of Wolfings”, and fans of the book get an added service: The Houses of the Mark are depicted, all with banner, number encountered, etc., and important characters note e.g. “Fights/saves as 8th-level Völva) and further information required to run them – not a full NPC-statblock, but enough to use them all.

The pdf also presents rules for guardian lamps, Mjölnir pendants and the ormstunga helm. These are okay, but not spectacular.

The supplement also includes an adventure for 4-6 characters of level 1 – 3, “Vifillmein.” It is good to have at least one nunhuman character, and random encounters are presented. The module does not come with read-aloud text, but features 4 sample hooks, 12 further rumors, and is surprisingly non-linear. NPCs and even random creatures are properly statted. We have an adventure n the rural countryside here, and while it can become deadly fast, any difficulty is the result of the actions of the PCs and how smart they handle everything. It’s also genuinely unique in several ways, and once more, is a good reason to get the module. It’s also an excellent adventure to kick off a new campaign with a more gritty, realistic flair – without being dark.

And this is as much as I can explain without going into SPOILERS. Potential players should jump ahead to the conclusion.

All right, only GMs around? Great! So, the small farming community Sællgarth has been beset by attacks from giant beetles! With the prevalence of belief in urðr, the locals have abandoned the place and renamed it (hence the name). However, a local boy named Egill has seen suspicious activity and is asking for help. The region’s map does something unique, in that it lists all the holes and beetle tunnels and differentiates between above and below ground encounters – the beetle tunnels are too tight for humans, but nonhumans, particularly halflings and gnomes, may crawl through them.

The cool thing here: there is no malignant intent per se behind the beetle infestation – just laziness and incompetence. The local and horribly untalented magic-user has simply botched handling a cursed item, and it’ll take a völva to lift the curse – who demands a hefty sum. Oh, and said magic-user? Finding him in his sunken longhouse, and getting him to own up? Yeah, that’ll be interesting. I really like this, as I’ve frankly made the experience that ignorance, incompetence and laziness are far more common than sheer malevolence. Kudos for going this route and using it as a hook instead of the standard arglblargl-I’m-so-evil angle!

Editing and formatting re very good on a formal level, good on a rules-language level. The b/w-layout adheres to a variety of styles – from two-column standard used for rules text to three columns for the encounters to one-column for the adventure (with stats on the sides), the pdf may not be consistent, but it’s always efficient. It also, thankfully, uses a proper font and not the pseudo-typewriter-crap used in the first installment. Artworks are a mix of nice b/w and public domain pieces. The pdf, unfortunately, has no bookmarks, which is a comfort-detriment. Cartography in b/w is functional and solid, but no player-friendly iterations are provided.

Richard J. LeBlanc, Jr.’s second Dragon Horde is vastly superior to the first: This book is educational without being boring or losing sight of being a game-supplement, and it assumes that the reader is intelligent, which is a plus indeed. The ‘zine has a tight leitmotif, and I like the völur as presented herein. The little adventure included is also remarkable in that it manages to set itself apart from a vast amount of low-level modules. The “use history/culture for gaming”-articles and the adventure particularly warrant getting this, while the rest is solid, if not necessarily mind-blowing. Considering that this is FREE? Definitely worth getting! My final verdict will be 4 stars.

You can get this nice little ‘zine here for FREE on OBS!

Enjoying my reviews? Please consider joining my patreon or leaving a direct donation.