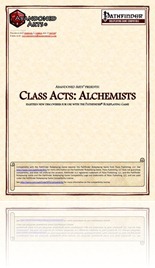 All right, you know the drill by now – 4 pages of content, 1 page front cover, 1 page SRD, 2 pages of content for new class-specific options, so let’s check out what Abandoned Arts‘ Daron Woodson has in store for alchemists!

What do we get? Well 15 new discoveries and 3 new grand discoveries for the perusal – and they are actually quite diverse: For once, there are two discoveries for the investigator-type alchemist: Deep Study lets you strap a willing (or sufficiently subjected) creature in your laboratory to properly reevaluate what you know about it with massive bonuses. Better yet, it can be combined with the option to make a proper autopsy to determine cause of death, etc. While personally, I prefer the scaling DCs in Rite Publishing’s “101 New Skill Uses” for the representation of autopsies, the alchemist’s new discovery works well enough to make it a cool alternative for e.g. a town’s guard’s coroner or similar specialists.

If you’re rather more into the potion-making aspects of alchemy, the craft wondrous elixir discovery enables you to create elixirs, glues etc. and similar materials in line with the alchemy-theme as if you had the craft wondrous item-feat. Combine Potion is a rather interesting one as well, as it lets you combine two potions that duplicate the same spell-effect to increase the caster-level up to your alchemist level, thus enhancing their potency.

If you’re like me and read something like “Cumulative Mutagen”, all your alarm-bells will go off: I’m happy to tell you, though, that the discovery only lets you imbibe another mutagen that replaces your last one and heals you in the process. There’s also the option to imbibe a maddening mutagen that allows you to act under the effects of a controlled confusion-effect – which at first sight might look detrimental, even though it grants immunity to fear, confusion and insanity as well as a bonus to damage. For me personally, though, this is gold: Insanity and fear as well as horror-elements feature heavily in all of my games and the option to describe cthulhoid horrors that would shatter a sober mind through the haze of such a mutagen is simply awesome! This might not see use in all campaigns and situations, but when it does, it will be awesome! If you’re more gravely-inclined (pardon the pun), you can also craft a necrotic mutagen that will make you seem like one of the living dead as if under the effects of false life and one that makes your flesh elastic.

Those more enjoying the explosive powers of the alchemist also are covered: You can now throw caustic corrosive bombs that inflict temporary dex-penalties due to itching to those hit by them and a grand discovery that lets you create extremely deadly radiation bombs! YES! Better yet, another grand discovery transforms the life-force of those killed by your explosives, conjuring elementals from the foes you slay. With Fecund Formula, you can create weird plant-like growths, making terrain harder to pass and perhaps illuminating areas via strange fluorescent fungi, depending on the amount of bomb-uses you expend. There’s also a new formula for ether dust, which duplicates glitterdust, but with a twist: Put that dust into a light source and the light temporarily highlights invisible and ethereal creatures – great not only for players, but also for DMs to sow paranoia!

There’s also a cool synergy hidden here: Delay mutagen enables you to offset the onset of a mutagen’s effect (great in aforementioned “Face down with tentacled madness”-scenarios, while deathly induction allows you to make an enemy (or yourself/allies) seem death – great storytelling tools, once again! And then there’s a discovery that enables you to inject foes with poisons in grapples.

The final grand discovery, again, is narrative gold, as it enables an alchemist to imbue a mindless being in a lab to gain semblance! IT LIVES!!! Guess Victor Mordenheim has this discovery and the potential for “attack of the xyz”-scenarios is plentiful indeed.

Editing and formatting are top-notch, I didn’t notice any glitches. Layout adheres to a 2-column standard and the pdf has no bookmarks, but needs none at this length. The best of crunch-books not only provide new rules – they provide new rules that ignite the spark of creativity. The best crunch-books ignite that spark on both the level of the player and DM in me. Each and every discovery herein has a valid and iconic imagery and/or reason to exist and works smoothly as intended, providing cool new options that go beyond just being bland bonuses. This pdf sets a whole new standard for the Class Acts-line and should be considered one of the best pdfs in the Bullet Point-price segment, providing excellent options that can fuel multiple adventures and the tools to create new types of alchemists. I not only have nothing to complain, but am rather flabbergasted by the excellent content herein – if you’re remotely into alchemy: Check this out. It is alongside ZSP’s Tattlebox #2 one of the best alchemical supplements available for PFRPG. Final rating? 5 stars + endzeitgeist seal of approval.

Class Acts: Alchemists is available from: