EZG reviews The Spirit of the White Wyvern

The Spirit of the White Wyvern 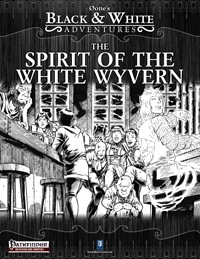 This adventure from 0one Gamesis 34 pages long, 1 page front cover, 1 page editorial/ToC, 1 page SRD, 1 page advertisement and 1 page back cover, leaving 29 pages of content for the adventure, so let’s check it out!

I’ll start with my usual disclaimer: This being an adventure-review, it contains SPOILERS. Players might wish to jump to the conclusion!

The “Spirit of the White Wyvern” takes place at aforementioned inn, located some place in your campaign setting, preferably at some trade route. As one would come to expect from 0onegames, the inn features a detailed, excellent map – but what takes place over the course of this adventure? Well, it turns out the inn is run by a former adventurer who managed to cross a powerful cabal of evildoers and is hiding here from them – thanks to the divination-thwarting property of the inn, he had managed to elude their grasp and hide an artefact from them.

Unfortunately, some time ago a traveling minstrel has been killed in the undisclosed vicinity of the inn and haunts the place ever since, becoming a kind of oddity and mascot that draws more attention and crowds than the proprietor would like. Thus, the PCs are recruited to put the harmless, benevolent and yet tortured spirit to rest. Over the course of their stay, the agents of the evil cabal have already infiltrated the inn and seeks to enlist the aid of the PCs as well. In the following sequence of events, kidnap attempts, lies and attacks by several humanoid strike-squads, the PCs will be hard-pressed to protect the inn and its staff and guests. In the end, the owner will probably have to relocate and the PCs will have a inn – with or without the spirit, for securing a large enough audience to finally show off his masterpiece to might just be a more taxing task than anticipated, but that’s beyond the scope of this adventure. It should be noted that each and every character and creature gets his/her/its own statblock.

Editing and formatting are actually very good, I only noticed one minor punctuation glitch, netting the adventure top-scores in this particular department. Layout adheres to an elegant 2-column b/w-standard and the artworks are b/w and absolutely top-notch as well. The pdf is extensively bookmarked. On to the content: I like the use of an actually interesting red herring to cover up what has been truly going on and how the structure of the adventure is interesting. I would have loved a map without a map key to print out for my players, though. I have but one central gripe with this module, though it weighs quite a lot, at least for me: As interesting as the cast of characters is, the conflict between two factions could have been more exciting. The antagonists have not the most intriguing agenda and feel like card box cut outs – while the generic nature of both organizations featured herein makes integration of them into any given campaign easy, the also feel extremely bland as a consequence.

I also would have loved the ultimate fate of the spirit to have an encounter/representation. While the adventure is not bad, it is also not one that blew me away. My players waltzed through it in one session, which is also something you should be aware of. I’m not sure why, but as I read it and when I dmed it, the only thing this adventure delivered for me personally was an overwhelming sense of “meh”. An interesting build-up essentially goes nowhere, the potential of the neat characters is more or less squandered as the adventure devolves and becomes a slugfest, of which I’ve quite frankly seen better ones. The interesting components remain mostly un(-der)developed and the potential the whole set-up has remains bland in its execution of tropes I’ve seen and read done better. Thus, I consider this adventure to be 2.5 stars, rounded down to 2 for not being bad, but somewhat boring. Mechanically, there’s nothing wrong here and if you’re looking for a tavern-sourcebook, this might even be 4 stars for you. As an adventure, though, it fails in my opinion. My final verdict will thus be 3 stars.