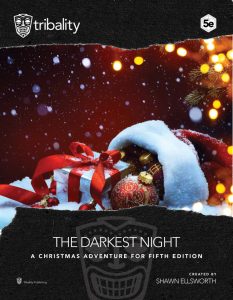 This brief adventure clocks in at 8 pages, 1 page front cover, 1 page poem-introduction (by Edward McCulloch), 1 page SRD, leaving us with 5 pages of content, so let’s take a look!

All right, in far-off Iceville, when the nights are longest, there is the gift-giving tradition of Kringlefest, named after Nicholas Kris Klaas Kringle, an ancient gnome who brought light in the darkest days and who traditionally presents a Christmas gift to all kids. Now, either a young gnome called holly, or a crazed hermit named Knecht Ruprecht beseech the players to save Kringlefest, for monstrous Krampus has taken control!

Once the PCs leave the village, they will have to defeat snow persons (I am all for political correctness, but here…I don’t know…is anyone offended by snow man? If so, rest assured that the module is properly PC here.) Nice: At the workshop, PCs may avoid patrolling, animated toy soldiers via Stealth and smarts and once inside, they only have to defeat the Krampus and his toy soldier bodyguards to save Kringelfest. Nice: We get a couple of sample quotes, though e.g. spell references are not properly formatted. The brief module concludes with a couple of sample present ideas for the PCs.

Editing and formatting, while not perfect, are pretty good. Layout adheres to Tribality’s nice two-column full-color standard with fitting photo-style artworks included in the deal. The pdf has no bookmarks, but needs none at this length.

Shawn Ellsworth’s little module is per se a decent Christmas adventure. On the plus-side, it is bereft of cynicism and could potentially be run for kids. On the downside, and I feel like the Grinch for saying so, this is very much the absolute ultimate of bare-bones structures. A couple of nice critters, 3 encounters, that’s it. Yes, it is PWYW. Yes, it has some solid ideas and a couple of nice tricks, but, as a whole, this is only the absolute minimum of Christmas-y things; a bit of snow, a bit of toys, evil Krampus, done. There simply isn’t much to this module and it feels, at least to me, like it could have really used a couple more things to do; perhaps a map of the final area, at least. Something. Anything. As written, this is more of a skeleton of a module. It may be worth checking out, but even as PWYW, I can’t go higher than 3 stars for it.

You can get this mini-module here on OBS for PWYW!