The Edgewalker: Wielder of Light and Darkness (Revised Edition) 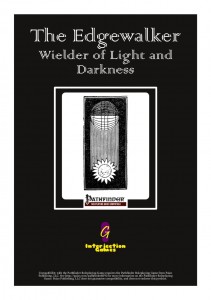 This revised and expanded version of the base-class by Interjection Games clocks in at 19 pages, 1 page front cover, 1 page ToC (and a story of the genesis of this class – it has been commissioned by Preston Mitchell!), 1 page SRD, leaving us with 16 pages of content, so let’s take a look, shall we?

The edgewalker gets 4+Int skills per level, d8, proficiency with simple weapons, short sword, rapier, sap, kukri, shortbow and whip as well as light armors and shields. Over the 20 levels of the class it receives a sneak attack progression from +1d6 to a maximum of +7d6 at 19th level and the class gets a 3/4 BAB-progression and good ref- and will-saves. As you can imagine, Uncanny Dodge also can be found among the class features, at 3rd level.

Now as a Batman/stealth type of class, receiving evasion relatively soon should not be considered uncommon (2nd level, improved evasion at 11th level, nerfing these two and taking away any lingering sense of these components being problematic) and 6th level edgewalkers receive hide in plain sight as long as they are within 10 feet of a sufficiently large shadow. Moving hide in plain sight further down the class progression was a smart choice, rendering the balance of the class better for it. Now this still makes targeting the edgewalker with spells et al rather difficult – the class is geared rather well towards taking softer targets out.

Very interesting for blocking charges and the like, “A Thousand Grasping Tendrils” allows you to, as a swift action, reshape your shadow into an array of tendrils that create a micro-aura of 10 feet of difficult terrain around you – which, of course, does not hinder you in any way. Ignoring difficult terrain and effortlessly scaling any incline less than 90° can also be done by these fellows. Another waypoint offers a dazzle against a creature you threaten – sans save, as an immediate action, useable whenever you switch between light and darkness consecutively. Armors of light (that do not necessarily enhance your stealth…), a shaken-causing breath weapon of black wind, 1 round slow at a higher save DC, better stealth, cushioning falls (the longer the fall, the higher the cost), very minor reflexive damage (plus dazzle), creating areas of demoralizing gloom and putting creatures subjected to fatigue-related negative conditions or con-damage/drain to sleep is rather interesting. Why? because for the edgewalker, rolling bad on sneak attack is not necessarily a bad thing: For each natural 1,2 or 3 rolled on such a roll, you also deal one point of con damage if you take the 8th level dark waypoint.

Now I did mention those greater waypoints and as you may have imagined, they are the big ones – Summoning forth several shadows from you one – cool. But more interesting would, at least for me, be the game-changer that is Cumulative Exposure – it deals automatic damage to all adjacent creatures whenever you subsequently use two waypoints. Using multiple dark waypoints may also yield bonuses and igniting mundane light sources to emit blinding flashes makes for a cool idea and better light/darkness poison/ichors are lethal and cool – what about e.g. an ichor that makes the target suffer from miss chances galore, but also receive an applicable miss chance as it becomes insubstantial -nice reflection of the duality-theme in the crunch here. Now also rather awesome would be the option to steal other creature’s shadows via ranged CMB to power darkness-waypoints. Cool here – the ability manages to properly prevent kitten-bag abuse. Lifelinks also are possible – ouch! Now it should be noted that, although the page-count of the pdf remains unchanged, quite a few stock artworks have been taken out of the file to make room for more waypoints, which is rather cool and adds to the arsenal of an already fun and inspired class. It should be specifically noted that the greater waypoints receiving some awesome tricks – what about establishing a link that damages a target when you are healed? Yeah, evil and oh so cool!

What I got turned out to be more rewarding than either. Whereas the ninja-class is essentially a type of rogue on steroids, playing an edgewalker in game, while similar on paper, feels actually much more tactical, more rewarding. The edgewalker is a great skirmisher/trick fighter and surprisingly fun to play. My final verdict is hence based on how the class performed in actual game, on its rather cool playstyle and neat variety – add the option for easy expansion of the system and the easy to grasp mechanics and we have a final verdict of 5 stars + seal of approval – now that we actually get more content and the rough edges have been polished off, there is literally no reason not to get this cool class and give it a try!

(Especially since I happen to have read the Antipodist, Interjection Games upcoming take on shadow magic, and the classes WILL have some interesting synergy…)

You can get this cool class (now even better) here on OBS and here on d20pfsrd.com’s shop!