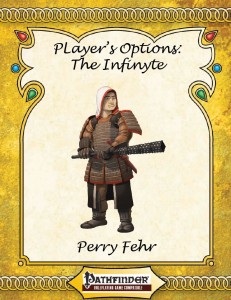 This installment of the Player’s Option-series clocks in at 10 pages, 1 page front cover, 1 page editorial, 1.5 pages of SRD, leaving us with 6.5 pages of content, so let’s take a look at the Infinyte!

The Infinyte needs to be non-evil with a neutral component and is a 20-level base class that receives proficiency in light and medium armor, shields, martial and simple weapons, full BAB-progression, d10 HD, 4+Int skills per level and good fort-saves.

The Infinyte is also interesting in that the class is built around the hero point system – as champions of the multiverse, they may detect law and chaos and suffer from an interesting quirk: Proximity to other members of their class turns out to be detrimental to their well-being. Now these beings also, much like brooding heroes, receive a side-kick, a so-called consort that strengthens the resolve and prowess of the Infinyte. Now to offset that, DM’s receive hero points as well to challenge the infinyte – why? Because the class receives so-called eternal hero points – which REGENERATE. Yeah. Ouch. While not as strong as Arcana Evolved’s hero points, PFRPG hero points can still be used to cheat death…

Beyond that, Infinityes can also scavenge in ANY class feature, any class ability via incarnate memory -one at 1st, 5th, 9th, 13th and 17th level – this translates to recalling a talent from a previous incarnation – and can be either a class ability, a feat or skills – in any way, the nigh-non-existent progression makes this cherry-picking kind of workable – a total of 5 levels progression isn’t that impressive. Feat-wise, the Infinyte counts as all classes for the purpose of this ability – however, weirdly, the text contradicts itself, once excluding races and once claiming that the infinyte counts as all races for the purposes of taking feats via this ability Some clarification would be in order here. The same goes for the rest of the ability, which, while understandable, could require some explicit statements regarding e.g. saves based on character/class level not scaling (or do they?) etc.

The Infinyte also increases hero points maximu, gains an increasing amount of rerolls of d20s etc. – so far, so good. Where any semblance of balance jumps out of the window would be via the option to, a limited amount of times per day, starting at 6th level and scaling upwards, take a additional round worth of actions – at any point in the initiative order. Not even an action. Not even an immediate action. Urgh. Compared to that, the alignment-spell immunity at 20th level and the DR gained feel a bit like a letdowner of a capstone. Especially when taking into account that the class essentially receives an item of power, a kind of DiY-scaling legendary item that you can develop over the levels – which is awesome. 3 sample items are provided with their level-assigned benefits to give you an idea here.

2 new, hero point based-feats for the infinyte are also provided, as is a comprehensive explanation of the hero point system and a sample level 1 NPC.

Editing and formatting are good, if not perfect -a tad bit more streamlining regarding the rules would really help this class. Layout adheres to PDG’s printer-friendly 2-column b/w-standard and the pdf comes fully bookmarked in spite of its brevity – nice.

Perry Fehr’s Infinyte is…AWESOME. Yeah, I know what you’re thinking – 2 hero points = cheat death, lot of rerolls, scavenging in weird class abilities…regenerating hero points…how can this be balanced? Well, it kind of is and isn’t. The issue is complex, so hear me out – on the one hand, the ability/feat-wildering requires tighter wording, but is damn close to working as *intended.* What do I mean by that? This class represents a champion of the multiverse, a born hero of reality. It is kind of supposed to be a bit off the chains and by its very fluff, it makes the class rather central to a group, which ought to be cleared with all involved, especially the other players. Otherwise, the constant death-cheating will feel unfair.

Now that being said – this class represents a capital H HERO, a champion with all the associated makings – sidekick, nemesis, heirloom item of power, strange tricks no one else can do… I *love* this guy. That being said, beyond aforementioned wording issues, the bonus round should at least cost an action and probably…should be severely restricted. If some kind of time limit beyond the generous hero point regeneration is applied to the amount of times they can cheat death (perhaps based on cha? on HD? Perhaps class level x 1/2?), I would actually see me allow these guys in my game. This, in spite of the relative brevity (if you take away the hero point-explanation, this is short!), should be considered one of the finest classes to come out of the Player’s Option-series so far – one intended for mature and high-power groups and players that don’t wish to hog the spotlight and certainly not a class for every campaign or group, but also a class unlike any I’ve encountered so far – in a good way. This has all the makings of a 5 star + seal of approval class, but due to the glitches still present, I will settle, at least for now, on a final verdict of 3.5 stars, rounded down by a margin to 3…and remain very expectant of the version in the final book – with some polish, this is a gem.

You can get this evocative, if rough around the edges, class here on OBS and here on d20pfsrd.com’s shop!