Return of the Rat Cult 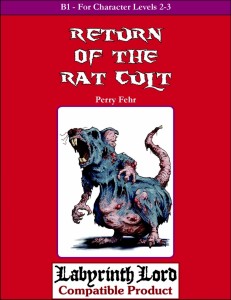 This mini-adventure for the Labyrinth Lord old-school system is 9 pages long, 1 page front cover, 1 page SRD, 1/3 of a page, leaving 6 2/3 of a page content.

This being an adventure-review for a module spanning the levels 2 -3, the following contains SPOILERS. Potential players should jump to the conclusion.

The town Felton was infested with the Rat Cult – and in the aftermath, the militia has been decimated to the point where it can’t offer significant resistance. Townsfolk have disappeared and the PCs are tasked to rescue the missing villagers.

The PCs may ask around town and do some research, though the clock is ticking: The time of sacrifice is approaching fast and unless the PCs can find the Rat Cult’s temple in the sewers fast enough. The complex of the Rat Cult is essentially a straightforward dungeon crawl with numerous twisting, empty passages to disorient PCs. The opposition including cultists (employing relatively smart strategies) and even a wererat. There also is a puzzle to be found – but one of the worst kind – there’s no way for the PCs to glean the puzzle’s solution apart from brute-forcing it – that’s just bad design and a pity regarding the per se nice basic idea.

We also get 3 new magic items.

Editing and formatting are top-notch, I didn’t notice any significant glitches. Layout adheres to PDG’s printer-friendly two-column standard and the pdf comes fully bookmarked for your convenience. The b/w-artworks are nice and the map of the complex is serviceable, but nothing to write home about. EDIT: Player-friendly map has been added.

If I hadn’t read it, I wouldn’t have believed that this module was crafted by Perry Fehr. Unlike other offerings I’ve read by him, this module just feels so utterly…generic. Yes, there is a nice terrain-feature here and there, but overall, this offering feels so. Bland. Sewer-themed dungeon with rats? Okay. Seen before. But the thing is – the execution simply fails to elicit excitement. You’ve quite possibly read a module in this vein before – and there’s nothing wrong with that, but it also means that for me, this falls short. Add the inability to solve the one cool idea, the puzzle, in any other way than brute-forcing it, and we arrive at a final verdict of 2.5 stars, rounded down to 2 for the purpose of this platform.

You can get this module here on OBS or here on d20pfsrd.com’s shop!!