Haunting of Hastur #1: The Lost Temple of Forgotten Evil (5e/OSR) 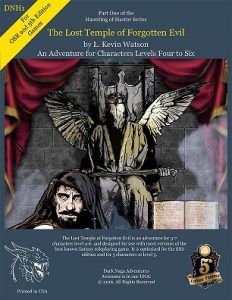 The freshman offering of Dark Naga Adventures clocks in at a classic 32 pages, with one page editorial and 1 page SRD, leaving 30 pages of content – and no, this does not include the front and back cover, since this book very much does not only hearken back to the classic era in tone – it is saddle-stitched and has a detachable color cover that sports maps on the inside – of course in the classic blue/white!

This module was moved up in my review-queue due to me receiving a print copy. The review is based on this print copy of the kickstarter premium print edition.

Okay, before we dive into the nit and grit of this book’s actual plot, let’s talk a bit about the dual-system format of it, shall we? The module itself does feature the OSR stats in the respective entries and the module does not assuming an additive AC – i.e., you’ll see THAC0s and the like. As for combat purposes, the final 3 pages feature the statblocks for OSR and 5e as well as the 2 magic items and special effects introduced herein. One of the magic items is basically a plot-device evil grimoire for the GM to utilize as she sees fit; the second would be a mace+2 that mentions disadvantage, but at the same time lacks the scarcity-entry of 5e’s magic item statblocks…as well as whether it requires attunement or not. In the OSR-version, it is but a single line in the wielder’s statblock that casts blindness on each hit.

Hiccups like this, unfortunately, do extend to the builds provided for the 5e stats, with e.g. the town drunk noting “STR”, but no score. Similarly, if you expect from the 5e stats more than the basics, like unique abilities or straight class progressions, you won’t necessarily find that – what’s here suffices to run the module, but nothing beyond that. The statblocks also have glitches like a magic bonus from aforementioned mace not featured in atk. So, if you do have the luxury of choosing with which system to play the module, I’d suggest OSR over 5e for this one…though, at least for the weapon, you should probably at least read the 5e-section. The adversaries in the module tend to have an ancient ability called “linking” – in 5e, this allows a character to use their reaction to give an ally they can see +2 to atk, spell DCs and saves…which can be extremely brutal when played smart by the GM. As a nitpick, reactions usually require a specific trigger. In OSR, they can grant +2 attack, defense and a 2 point bonus to saves “and all party saving throws have a 2 point penalty” – at least in the OSR-systems I’m familiar with, I’m not aware of party saving throws. I assume that should refer to the saves of PCs targeted by the linked creatures.

In short: On a formal rules-language level, this is not the most precise of books. That being said, this adventure does have its merits and plays significantly better than it reads. Let me elaborate: For one, the cartography of three villages provided by none other than Alyssa Faden is excellent and player-friendly for these components; similarly, the regional map of the Boldon region in which this module takes place is nice as well. The region as such is lavishly detailed – it can easily be plugged into just about every fantasy gaming world and the relative lack of elves etc. means that the module works pretty well even in human-centric settings. 4 settlements (Boldon, Ponto, Maria, Sumer), all with maps, will be visited by the PCs and the module actually takes heed of consequences…

…and this is pretty much as far as I can go sans SPOILERS. From here on out, the SPOILERS reign, so potential players should jump to the conclusion.

All right, still here? Great! It starts, as often, with a tavern and a tale – on a full page, the local drunk and erstwhile productive member of the community, Fredu, has a tale to tell for sufficient alcohol – a tale of a temple forgotten from a bygone age, when evil reigned. The tale itself is a massive, 1-page read-aloud text in a module that otherwise requires the improvisation of the like. The drunkard, plagued by visions and blackouts, has stumbled upon a place dedicated to none other than Hastur and ever since, he has tried to quench the nightmares…saving him from certain death at the bottom of a glass is but one potential action the PCs may take. However, he also mentions having told more people about it – a retired wizard, for example…and then there is that fletcher, who is fashioning a map.

Beyond the tale, the module is very much a free-form sandbox, as the PCs follow the leads of Fredu’s tale and try to find the hidden complex…which isn’t that hidden, after all: The servants of Hastur have taken residence and the timer ticks: The dread statue contained within is fed continues sacrifices and its cultist-enhancing aura extends further and further. On an organization note, the aura’s effects should have been noted in the overarcing chapter and depiction of its progression, not only in the room where it actually stands…considering the SERIOUS power it conveys to the cultists. That is a nitpick, though – there are a lot of things I absolutely adored in this module: For one, the old-school design-aesthetic. In an age where practically every puzzle and obstacle can be “rolled away”, notes on how PCs have to be extremely lucky, regardless of level or doors that require you to find their combination due to the gazillion possible combinations feel very much refreshing.

Similarly, a highlight of the module, as strange as it sounds, may well be the legwork – PCs can be heroes and save old apothecaries from angry peasants, duke it out with loud-mouthed cultists and end on the wrong side of the law – whether due to their own actions or due to corrupt officers standing in their way, the module manages to evoke a sense of consistency and a feeling of being alive that you only rarely see. Similarly, the fact that there are A LOT of beautiful b/w-artworks, all with the same style (AND quality!) as the cover, lends a sense of consistency and continuity to the proceedings and makes for great hand-outs for the players to enjoy.

The sandboxy section here is pretty “realistic” in that it manages to convey exceedingly well and illusion of a group of mercenaries planning an excursion to a forgotten temple, while dark forces stir and try to stop them. Similarly detailed, notes on air quality, illumination and the like can be found for the complex itself. The intriguing component about this temple itself would once again not necessarily be the set-up – that’s as classic as it gets; it’s the focus on cultists and a dynamic environment, with entries on what cultists are doing when featuring in the respective rooms helping to keep things flowing. Regarding terrains and traps, this module is a bit on the weak side in this section, though. Ultimately, the temple is a pretty straightforward attack on the hide-out of a well-organized cult…and it is extremely deadly. Not kidding, if the PCs are dumb, they will die HORRIBLY in this complex. On a nitpick: The unique demons featured in the book could have used a detailed description – as provided, they remain a bit opaque. The cultists receive significant benefits here, particularly within the sphere of influence of their idol, and should not be underestimated – saves at disadvantage, cultist attacks at advantage. And no, this does not have an OSR-equivalent; familiarity with this component of 5e- terminology is assumed for that aspect of the module.

Editing and formatting are good on a formal level; on a rules-level, it does have a couple of hiccups. Layout adheres to a beautiful 2-column b/w-standard. As mentioned above, both the copious number of artworks by Rick Hershey and the great cartography render this module rather beautiful and contribute a lot to its atmosphere. The print copy I have is certainly a module I am glad to have. I can’t comment on the electronic version.

Kevin Watson’s first part of the “Haunting of Hastur”-series is a module that is honestly significantly better than I expected it to be. You see, the set-up of the module isn’t the most evocative and I tend to be a bit weary of dual-system books. That being said, whatever system you end up using, you won’t have paid for a lot of content you won’t use; the emphasis of this book is pretty much on the roleplaying aspect and the expert-level atmosphere this one manages to evoke. Were it just for the atmosphere, this undoubtedly would score higher, but the fact is that the dual-system approach doesn’t always work too well in the book; OSR gaming seems to be the default assumption and then, suddenly, 5e-terminology seems to be featured in the default assumptions. It is my honest belief that the module would have fared better with one carefully crafted OSR-version and one for 5e, instead of this blending, but that may just be me. If you do not mind this, however, you pretty much get a module where you can mix and mash the two.

Sooo…do I recommend this? It ultimately depends. If you’re looking for a challenging, atmospheric module with an old-school aesthetic in design and presentation, then yes, this may be a nice addition to your library. If you expect more new school handholding, preset DCs for actions and a bit more guidance, then you may end up disappointed. Similarly, this module should best be run by experienced GMs, since there is, beyond the beginning, no read-aloud text: You need to improvise that/know what’s where and while e.g. conversations with NPCs provide an astounding depth of guidance via bullet-points and consequences of PC-actions, there is still quite a bit left up to the GM. How to rate this, then? Well, here things get a bit tough for me: You see, I really liked this module, but it does show a bunch of the freshman offering-hiccups that can tank the game for less experienced GMs.

In the end, for OSR, I consider this to be a 4 star module; for 5e, I’d rather consider this 3 stars, since the system’s skills, proficiencies and similar components could have used more direct consequences within the module. Since this is a freshman offering, this gets the benefit of the doubt and hence, I will round up from my final verdict of 3.5 stars for the purpose of this platform.