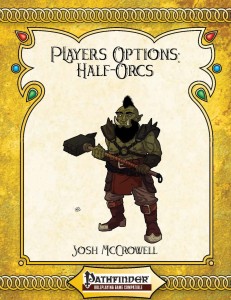 The penultimate (as far as I know) part of the race-centric Player’s Options-pdfs is 13 pages long, 1 page editorial (cover is a separate .jpg), 1 page SRD, leaving us with 11 pages of content, so let’s take a look, shall we?

The first variant race we get is the orc-kith – a being with some blood of orcs in their lineage, but not enough to make them half-orcs. They get +2 to an ability of their choice, normal speed, darkvision, +1 to intimidate and diplomacy, skill focus as a bonus feat, count as orcs for respective effects and get orc ferocity. *drumroll* NOTHING TO COMPLAIN! In fact, I really like these! I’ll introduce them into my game! Nice job!

The second racial variant are the sharukh – spawn bred from orcs and dwarves and most likely not from consensual intercourse. Crunch-wise, they get +2 to Str and Wis, -2 to Cha, get 20 ft. movement and no armor penalties to movement, darkvision 60 ft. and when reduced to below 1/4 HP and without conscious allies around, they get +2 to atk and AC, +1 to Knowledge (dungeoneering) and Survival made underground and count as both orcs and dwarves. And surprise – I like this one as well! I REALLY like this one as well! Again: Two thumbs up – also thanks to the height and weight table.

Next up are 18 new feats – and they are actually interesting, essentially introducing a class of feats called “storm” feats – they have in common that they work in the first round of combat/surprise round, adding damage to your attacks as you wade into combat: Whether dealing +1d4 damage, gaining additional attacks at -5 to atk, daze foes for one round etc. A cool idea that carries with it the idea of the orcs crushing into melee – especially with the chance to reposition foes. Offsetting cha-penalties (but no chance for retries) and capitalizing on exotic allure are also fitting and while not brilliant in their execution, can serve to make uncommon character concepts viable. And then there are the ferocity feats – and these are imho what racial feats should be about: Enhancing racial abilities. Take e.g. ferocious maneuver – while ferocity is active, you do not provoke AoOs for bull rush, disarm, steal, sunder and trip attempts. Awesome! Also extremely cool: Grit your tusks – when raging and failing a save, you regain 1 round of rage, up to your daily maximum and only once per round, limiting what could have been overpowered and turning it into awesomeness. Have I mentioned the goblinoid/orc-centric leadership variant herein that could easily serve as a template for any number of evil leadership feats? Seriously – these feats are actually intriguing, smart and varied – two thumbs up!

6 new flaws, in the established awesome quality of the series are also part of the deal – and while I personally abject to masochism being portrayed as a flaw, I won’t hold that against the pdf since the execution of the flaws per se is neat – whether black lungs or cannibalism, the drawbacks are interesting indeed.

Finally, we get gear – a new slaver’s whip, orc iron jaws, an arena mask, kits for seeming human and scarification and liberation jewelry that denotes you’re no longer a slave – interesting for e.g. Andorans…

Editing and formatting are top-notch, I didn’t notice any glitches. Layout adheres to 4WFG’s two column b/w-standard with some beautiful full color artworks. The pdf comes fully bookmarked for your convenience.

Designer Josh McCrowell has done a great job here – I actually consider both races balanced and well-crafted and love what he has done with the classes of feats – resulting in the by far best supplement in the series so far, offering well-crafted, interesting options for half-orcs and definitely enhancements to your game – my final verdict hence will clock in at enthusiastic 5 stars + seal of approval. Congrats to the author and PDG/4WFG!

If you’d rather buy the whole subscription, you can do so here on OBS and here on d20pfsrd.com’s shop!