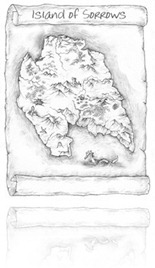 This pdf from Raging Swan Press consists of 4 files, 3 high-res jpegs and a rather flexible T&C-text file.

As with “Island of Sorrow I”, this file provides 3 different iterations of the same map with minor modifications. 2 of the jpegs are b/w and 1 has a parchment-style background. The first map is b/w and features no framing scroll, the second one comes as b/w with a framing scroll. The latter map also comes in a version with a parchment-style background.

In contrast to the first “Island of Sorrows”-map, we get a map of the island, but not the surrounding waters/coast-line. The waters surrounding the island feature a sea serpent. The maps feature what seem to be woods, a stranded vessel, a chasm, several caves, what could be a rune-studded monolith, crossed sabers denoting a battle-field, a an intact tower and what seems to be the remnants of a ruined keep.

The maps are once again well-drawn and work well for what they initially were intended to be – as ready-to-use handouts, they do work. However, we don’t get any option to customize the maps via layers and no version of the scroll-less map in parchment-style is provided for. I fully admit to being spoiled by e.g. the Fantastic Maps-line and at $4.00 it is not exactly cheap. However, this map comes with much more details than “Island of Sorrows I” and provides a plethora of locations you as a DM could flesh out/plug adventures in. Since the level of details provided is much higher, I’ll settle for a final verdict of 3 stars – an ok handout if you need one.

Treasure Map: Island of Sorrow II is available from: