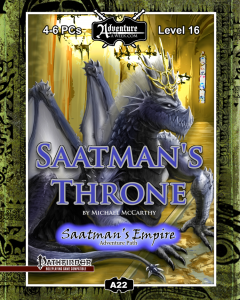 This being the review of the finale of the saga, the following contains SPOILERS – potential players may wish to jump to the conclusion.

All right, still here? After A16, A 18 and A19, the Klavek Kingdom has seen more than its share of draconic incursions – and now the culprit is revealed: Saatman, the legendary draconic god-kind has risen once again and thus, the trail leads the PCs to the erstwhile seat of his power – the xenophobic village erected in its ruins, the village f Gustavin, where belief in the dragon gods of old is still held high. Hidden from the world by a conspiracy of the Serpens Sanguis cult that controls the place, it is here the PCs will have to go to put an end to the draconic threats. The village per se is controlled by multiple houses and in order to truly have a chance versus Saatman (and enter his throne’s ruins), the PCs will have to ingratiate themselves with the noble houses – unless they wish to fight the whole town, which is not advisable.

When they have made their allegiances clear (and thankfully, the majority of the noble houses wants Saatman gone!),, they may explore the throne and there encounter not only a nice puzzle that has the PCs realign some depicted plates showing colored, abstract shapes and finally find the hidden halls of the mighty, a deadly complex and here, we get an interesting sandboxy element we don’t see all too often: Instead of making the dungeon regular, it is actually not a straight crawl, but mentions disguises, potential quests for the patriarchs and the options to recruit cultists of Serpens Sanguis away from their god – and they indeed should, for the cultists are elite combatants and the half-dragon heroes populating the  complex – and yes, we get small-talk and even more draconic foes – dragon-slaying’s the name of the game and below the complex, the radiant pool’s complex is waiting – but what does the pool’s fluid do? It allows you to regain spells. Yes. OUCH. But the cost is dear – insanity looms for all daring to use the waters, as the permanent loss of wisdom is waiting.

There, the PCs will also have to combat a deceitful marilith wielding razor-sharp scrollblades – allthewhile tracking notoriety – the more creatures they killed, the more lethal the final confrontation will be and if the PCs botched, they better have an army of cultists at their back, for Saatman plus his named draconic ally, his archmage (who listens to the inappropriate name of Matthew Rasputin) his golems and his 6 draconic concubines (which could join the battle) will be too much to handle for all but the best, smartest and luckiest of PCs – this adventure demands respect and if the PCs don’t show the proper caution, they’ll be used as draconic toothpicks. Oh, have I mentioned the one-mile radius genocide spell that the PCs should prevent from being cast since it will make the war that will wreck the Klavek kingdom if they fail problematic at best?

If the PCs manage to destroy the legendary dragon, the adventure is over – for now, for more might be waiting in the wings – there is e.g. an appendix detailing draconic god-kings of old and a new deity who might take an active interest in the downfall of Saatman…

The pdf also provides one page that features player-friendly versions of the maps.

Editing and formatting are very good, I didn’t notice any significant glitches. Layout adheres to a parchment-colored 2-column standard with gold borders – nice looking indeed. The pdf comes fully bookmarked for your convenience and the artworks are ok, though you probably know some of them already. It’s nice to see the epic cover of A18 as one-page artwork, though.

Saatman’s Empire’s finale is a sandbox that requires a lot of work from the DM – from developing the social dynamics between the houses and a more detailed map of the village, there’ll be quite a bit to do for the DM wishing to run this. The module per se is  great – but its imho honestly a bit too ambitious for its length – the recruiting of the cultists, what essentially amounts to an organized insurrection, is an awesome angle when combined with a proper infiltration and the added notoriety-angle is also great and developed in a meaningful way – but in the end, the system left me wanting more. Full-blown defense strategies depending on notoriety would have made this module even better and the pool of radiance, in spite of its limits, can unhinge games – players should never have access to such a resource, especially since the opposition, when logically studded with these, will mop the floor with the PCs in a huge arcane fallout.

The module also is less unique in its terrain – unlike A19, there simply isn’t that much to go on regarding terrain hazards and while the locations are interesting, they are less detailed than I would have liked them to – especially with the amount of potentially flying foes, the dimensions of the complex would have greatly helped running the complex. As written, the respective areas could imho have used some additional information – dragon-sized doors are nice – but for which dragon-size? The module loses a lot of its appeal in the relative murkiness that cloaks many of the concrete dimensions of the areas, even though the places per se are interesting and epic indeed.

Hence, even while there’s nothing truly wrong with this module, it feels a bit overambitious and less concise, less tightly focused than A19 and ultimately loses some of its great potential. DMs need to work for modules to work, but this one, at least to me, requires a tad bit too much work on behalf of prospective DMs, also due to the fact that we don’t get any concise strategies for all those high-level foes with all their options – and at this level, there’s a lot they could do and at least some guidance would have been nice.

This module is not bad, don’t get me wrong, but its a bit too abstract a bit lacking in the finer tunings of the craft and requires some work – if you’re willing to work, this may clock in as high as 4.5 stars, but if not, this will be problematic – hence, I’ll settle for a final verdict of 3.5 stars, rounded down to 3 for the purpose of this platform.

You can get this climax to the Saatman’s Empire-saga here on OBS!