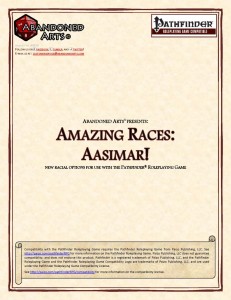 This installment of the Amazing Races-series is 4 pages long, 1 page front cover, 1 page SRD, leaving us with two pages of content, so let’s take a look, shall we?

As always, we kick this installment off with new feats, this time around a total of 8!

-Dazzling Counterspell: Dazzle foes whose magic you counter for countered spell level rounds. Nice one to make counterspelling less of a wasted action.

-Disrupt Undead:  Automatically (no suppression) treat any undead you touch or hit with an unarmed strike as subject to a disrupt undead effect with CL equal to your HD.

-False Hero: +8  to bluff to lie about your alignment/motives.

-Holy Wings: Wings are treated as good-aligned for overcoming DR.

-Sanguine Sacrament: When subject to a bleed effect, you treat each square within 5ft. of you as consecrated. You may cut yourself for a bleeding wound to also gain these benefits. I REALLY like this feat! Its imagery is iconic and damn cool!

-Sanguine Strike: When suffering from a bleed effect, you deal an additional 1d4 points of damage to undead and creatures with the evil subtype with your weapons.

-Sunspell (Metamagic): At +2 levels, dazzle creatures upon failed will-saves for spell level rounds. Already dazzled foes become blinded for one round. Ridiculously weak, since it only works in areas already in sunlight and its +2 levels make this a complete waste of a feat.

We also get two new traits, one that makes you count as humanoid with the human subtype and one that nets you access to an effect akin  to the phylactery of faithfulness for 1 round.

Beyond that, there also are two new alternate racial traits, one replacing “skilled” with the option to impose a -4 penalty to Perception on foes the aasimar has successfully used diplomacy against, the other one replacing spell-like abilities with a good aura of a paladin of equal levels.

A new archetype is also provided – the Righteous Fury is a variant of the barbarian and modify their list of class skills and in spite of alignment restrictions, continue to advance as a paladin even if none-lawful. When raging at least two rounds, the archetype also regains 1 round of rage at the end of a rage and finally, the barbarian’s weapons count as good while raging and deal additional damage versus evil creatures. On the one hand, I love the idea behind this archetype, on the other hand, I honestly consider the execution slightly less interesting than it ought to be – a blend of paladin/barbarian could have been much more interesting than this rather conservative take on the idea.

Conclusion:
Editing and formatting are top-notch, I didn’t notice any glitches. Layout adheres to Abandoned Art’s two-column no-frills standard and the pdf has no bookmarks, but needs none at this length.

Author Daron Woodson has crafted this time around some rather cool feats – especially the Sanguine Sacrament-feat is simply glorious. The other components of the pdf are also neat, but don’t completely live up to said feat’s glorious potential and imagery. While I love the archetype’s idea, more paladin/barbarian-synergy ability-wise would have imho made this so much more compelling – still, a more than solid installment in the series and well-worth 4.5 stars, rounded down to 4 for the purpose of this platform.

You can get this here on OBS and here on d20pfsrd.com’ shop!