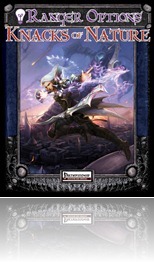 This pdf from Super Genius Games is 11 pages long, 2/3 of a page front cover, 1 page editorial/SRD, leaving 9 1/3 pages of content, so let’s check out what SGG has cooked up for the rangers!

Rangers have often been neglected by the core-rules and, to be honest, never felt that unique to me and favoured enemies and terrain always felt rather…boring to me – it is here that the central innovation of this pdf comes in: 19 so-called “knacks” are introduced – essentially, they can be selected instead of just about any of their abilities and this supreme versatility must have been a true challenge to balance. It is the iconicity of them, though, that makes knacks a MUST for any campaign out there: Ever wanted to grab onto a giant or similar large foe and ride along while hacking away? Get the new Attach-knack! Ever wanted a truly awesome animal companion? With the Beast King Animal Companion, your companion becomes a mutation with access to a bonus feat or 1-point evolutions of the eidolon and improved stats! Want to track like the stereotypical Native-american with an ear to the ground? There’s a knack for that! There are also ones for rangers who prefer plants, vermin and elementals, which was kind of what I expected. In fact, there’s a mini-knack-tree that lets you transcend into an elemental knight at the 20th level. Even better, extensive advice on how to create new knacks from archetypes with special regard to the skirmisher is provided.

After that, we get 10 new spells, including a ranger’s version of explosive runes, spells dealing with scent-based tracking (and thwarting it) and a great spell to become inaudible, which is essentially a hearing-based version of invisibility. Dealing with unfavourable terrain is also covered via spells. All in all a solid selection of new spells, none of which felt overpowered.

The pdf also provides 3 new archetypes that actually deserve to exist: The Explorer is a hybrid of ranger and rogue (including trap finding and sneak attack against favoured enemies or when in favoured terrain), while the master herbalist studies more terrain than foes and is rewarded by being able to utilize herbs to get bonuses to skill-checks and even learn a limited amount of extracts and low-level formulae. Finally, the Tercel is essentially the nature-version of the Inquisitor, including an expanded spell-list. All of the 3 archetypes fill their respective roles admirably and can be considered definite winners.

Editing and formatting are top-notch, I didn’t notice any glitches. Layout adheres to SGG’s 3-column standard and the front cover is so beautiful, I wish we’d get a one page version without the header. The pdf is fully bookmarked, which is another plus. Ranger knacks are a stroke of genius and I wish, oh how I wished there were more of them in this book. Seriously, the options alone are worth the low asking price, even if you’re like me and are bored to hell by elemental-ascension abilities/PrCs/whatever. The spells are rock-solid, though I only considered Inaudibility to be truly brilliant. It is with the 3 new archetypes that bridge the gap and redefine what rangers can be that I’m truly at ease with this pdf – while some of the knacks were not absolutely up to the level of others and while not all spells wowed me, the vast majority of content in this pdf is of a quality that puts the bar very high indeed. Even if I wanted to, I couldn’t bring myself to rate this any other way but giving it 5 stars and the Endzeitgeist seal of approval – a must-buy for everyone not wholly satisfied with the ranger and for everyone who considered the ideas mentioned even remotely intriguing. Now let’s hope for more knacks in the future!

Ranger Options: Knacks of Nature is available from: