Fane of the Fallen Pathfinder Edition 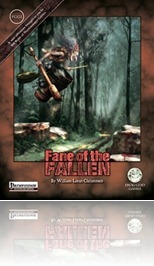 This being an adventure-review, the following contains SPOILERS. Potential players might wish to jump to the conclusion of the review.

Still here? Righty right! This adventure kicks off with a raid on the city of Brookmere, where the PCs are researching some information or another in the city’s famous library. It’s said library that is surprisingly the focus of the raid of an elite-army of goblinoids. The PCs will try to stop the invaders and probably just fall short of stopping a mysterious woman from stealing an obscure tome. After this raid and the excitement in the burning (fully mapped) library has subsided, the PCs will have to bear the white flag to the local clan of Orcs to find out whether the green-skins have violated the treaty with Brookmere.

Once the PCs have reached the Orcs, they will have to prove their worth by battling a zombie-dragon – after all, their insinuations have insulted the orcish sense of honour. Once they have somehow passed the challenge, the chieftain is willing to help them if they kill some rather deadly troll renegades. Once these creatures, now living in an abandoned barrow, have been cleared out, the treaty between the goblinoids and Brookmere is considered renewed and the PCs might even score some loot – if they messed up, war with the horde might be impending!

The trail of the attackers leads towards a small community called Sylvanus. On the road there, the PCs will encounter a deadly medusa’s statue garden and her lair, in which the smart fighting creature will provide for a dread challenge. At the foot of Mount Bloodstone, a commoner asks for the PCs help as another side-trek: In order to save her daughter, the PCs will have to scale the mountain, brave fully detailed yeti and stone giant caves (not necessarily to fight them, btw.!) and save the girl from the Roc-mama who has adopted the girl. Said daughter is also fond of the roc chicks and the mother-bird, making a non-violent solution again preferable.

After these sidetreks and tribulations, the PCs will reach Sylvanus, or rather what’s left of it: The town has been deserted by all but some huddled, frightened survivors and is now haunted by a pair of deadly vampires. To make matters worse, the true culprits start becoming apparent: Elves. Lilith-worshipping, demonic, fallen elves that would make drow blush not only with modesty, but also due to their vile practices. Their extremely beautiful, insanity-inducing fallen harpies (failed priestesses of the succubus-queen) and a rear-guard of the invading force is still around, making this the first encounter with this adventure’s main antagonists. In order to save the villagers and unravel the mysterious plot of the elves, the PCs will have to track them into primal and eerie Harwood Forest.

Once in the depths of the forest, they will encounter a vast array of villagers and foes, turned to wood by a xenophobic druid and his wood-elemental Gertrude. In order to reverse the transformation of these innocents, the PCs must successfully scale the Druid’s Tree lair and deal with his challenges, convince him to let the villagers go…only to find out that the artefact he could use to revert the transformation has run out of juice. Only one could help: BABA YAGA.

Yep. The Crone is in here. With full stats. CR 29. Don’t screw with her or her artefacts. The presentation of her hut, though slightly less compelling than in “Tales of the Old Margreve”, is AWESOME. In order to coax the necessary information from her, the PCs will have to hitch a ride with Charon in the Land of the Dead. To Circe’s Island. To steal an egg from a phoenix and make the noble creature cry. Twisted, iconic, stellar…and potentially an aspect the PCs could skip all together. Just like a sojourn into a cursed barrow, where an entombed lich awaits. As soon as the crone has been satisfied a race against time begins: Lilith’s chosen Medb, a succubus of extreme power confined to an artifact axe of the vilest power is the fallen elves’ true goal – the villagers will be sacrificed according to a rite in the book stolen from the Brookmere-library. Thankfully, the axe is still confined in the temple inside the meteor-crater of Tunguska. After exploring the now-corrupted and extremely well-secured temple, an elite-squad of fallen elves will try to wrest the axe from the PCs – hopefully in vain.

Only one thing left to do: After saving a paladin in a sacrificial ceremony, the PCs will have to jump into the dragon’s maw: In order to stop the machinations of the Fallen Elves, the PCs not only have to infiltrate their hidden city of Nowgorod, they will also have to get into the castle, eliminate the vile race’s leaders and save a whole village from the depths of a multi-level castle that constitutes the power-base of the whole nation of vile, decadent demon-worshipping elves. Inside await a vast majority of high-level NPCs, arch-wizards, golems and soldiers – of all the high-level modules, the castle possibly makes for one of the deadliest challenges I’ve read for PFRPG. I only have one minor gripe in this section: While the castle is highly detailed and includes information on alert-responses etc., I found the lack of details and hand-waving of the infiltration of the city unfortunate: With all the exquisitely-detailed side-treks, I couldn’t help but feel like one side-trek less and more information on city Nowgorod and its customs would have improved the central story-line of the adventure. The queen, perhaps a legendary succubus-champion, several CR 16+ wizards and a whole city of fallen elves…and then there’s the potential problem of escorting a whole village of prisoners out of the succubus-like elves’ corrupt town.

Editing and formatting are excellent: I only noticed 3 glitches on this many pages and all were minor punctuation errors. Layout adheres to an elegant 2-column standard and the B/w-artworks ROCK. There are a lot of them, too and we get maps for even the tiniest side-trek. Awesome! Even better, the city-maps are player-friendly and don’t include annoying numbers. One downside of the book is quite eminent: I’m glad I managed to get a dead-tree version – the pdf doesn’t have bookmarks. At 164 pages, bookmarks are a NECESSITY, not an option. The lack of bookmarks forces you to print out the adventure, in spite of the compiled stats of the elite enemies, to have any chance of running it efficiently. On the fluff-side, “Fane of the Fallen” is on the one hand pervaded with stellar old-world fluff and a true sense of epicness. On the other hand, several of the side-treks cut be skipped by the PCs and the central plotline has a minor weak spot near the end. And then there’s the lack of bookmarks in the pdf-version, which at this length, is unacceptable. Content-wise, I’d settle for a 5-star verdict, but the lack of bookmarks and story-hick-up instead make me settle for a 4-star verdict along a recommendation for everyone who’s looking for an epic, old-school challenge.

Fane of the Fallen Pathfinder Edition is available from: