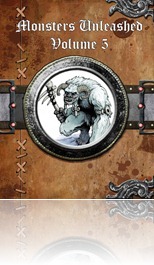 The first creature herein is a magical cat-ally and master of illusions called Asnae (CR 6), which may actually make for a neat representation of a Cheshire cat-style creature in your game. The critter comes with a illusion-centric feat and 3 spells, one of which actually enables it to enchant a forest to become creepy.

The second beast of the bunch is the Gnarl (CR 7), a dread underdark predator and grappler with an iron grip and the option to dislocate his foe’s limbs.

If you’re familiar with the Fehr’s Ethnology-series, you might also know about the Ith’n Ya’roo (CR 5), benign yeti-like creatures and masters of bonecrafting and it is here that the beasts get a write-up that is rather a monster instead of a potential PC-race. They also come with a new spell to prevent their bonecrafted tools from crumbling under combat’s strain.

Mezadevs are interesting CR 11 fey that look somewhat akin to minotaurs – only that they have a bag which contains all kinds of allies – from ettinss to dire animals, these critters give the “bag of tricks” a whole new meaning – my favourite critter in this pdf, btw.!

The final monster introduced in this pdf is the Striga (CR 3), infernal agents of hell, these women have been scalped and blinded and no possess the ability to discern the truth and ferret out betrayers to the cause of hell. The artwork for the Striga is AWESOME and disturbing, btw. – perhaps the best I’ve seen in the whole series!

Editing and formatting are very good, I didn’t notice any significant glitches. Layout adheres to a per-se printer-friendly 2-column standard and the artworks for the creatures are all full-colour and of a higher quality than I’d expect at this price-point, though two pieces of artwork may already be familiar to you if you’ve read the two first installments of Fehr’s Ethnology. The pdf also comes with extensive bookmarks, which is nice. While some of the creatures herein failed to utterly blow me away, I did actually enjoy 3 of them quite a bit and really liked the rest – this installment actually features no creature I’d consider truly boring or bad and while the re-used artwork is a very minor downer, I’d ask you to look at the price-point: I’m still baffled at the fact that every creature gets a piece of artwork, let alone of the quality of e.g. the Striga. Due to the low price, cool creatures and neat overall content, I’ll settle for a final verdict of 5 stars – very well done!

Monsters Unleashed V.5 is available from: