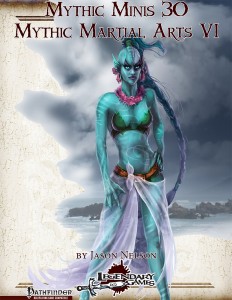 -Djinni Spin: Increase damage output and temporarily penalize ranged attacks against you. Creatures of any size may be pushed away 5 feet (or staggered) and non-mythic creatures receive no benefits regarding this, even if they make the save. Nice.

-Djinni Spirit: Higher electricity resistance and enter the style reflexively. Similar movement-causing trick to Djinni Spin, plus clad yourself in a defensive electricity-damage causing sheathe that may also deafen adversaries.

-Efreeti Style: Like Djinni Style, but with regards to fire; Also use mythic power to temporarily increase reach by +5 feet.

-Efreeti Stance: More fire resistance and reflexive entering of the style; has a typo that confuses mythic tier with mythic power – you can expend mythic POWER to receive temporary immunity to fire. (Expending a tier would be a steep cost indeed!) Has a defensive sheathe like Djinni Spirit, just fire-themed and causing the target to catch on fire and potentially be dazzled.

-Janni Style: No penalty to AC when charging, decrease atk-bonus of flanking creatures against you. Use mythic power to freely charge through allies and make as many turns as you want while charging. Now this is cool!

-Janni Tempest: Trips targets as a swift action, bull rushes them as a move action or executes a maneuver that works as both bull rush and trip as a standard action…which makes no sense. An attack is usually already at least a standard action, so in order to qualify here, one has to hit with an AoO in the round before one’s turn. Problem 1: You can’t expend the required actions when executing AoOs…so next turn? Problem 2: Do bonuses to one of the combat maneuvers (trip or bull rush) apply to the check? Do bonuses stack (e.g. bonus to trip + bonus to bull rush?); Using mythic power, you can execute one as a free action or the combined maneuver that doesn’t work as a swift action. Cool idea, needs clarification.

-Marid Style: As Djinni Style for cold energy; Extend reach by 5 foot, for unarmed attacks only, via mythic power.

-Mardi Spirit: Defensive sheathe that entangles, add fatiguing hypothermia to elemental fist instead of movement; other than that, a cold-themed Djinni Spirit.

-Shaitan Skin: Acid-themed copy of the X Spirit-feat with chance for causing the sickened condition via the reflexive sheathe.

-Shaitan Earthblast: Increase damage output and turn the area into difficult terrain; Creatures that fail their save are knocked prone. Cool!

Editing and formatting are good; while I noticed minor glitches and a couple of the hyperlinks on the first page have a different font size, nothing too bad. Layout adheres to Legendary Games’ 2-column full color standard and the pdf has no bookmarks, but needs none at this length.

I’m not a fan of elemental-themed class options unless they do something different for each element, rendering them more than reskins of the same ability. I’ve read too many elemental groups of abilities that boil down to “as the one with fire, but with acid” – and this pdf does suffer from this issue, at least partially. That being said, Jason Nelson does add some unique options to each of the styles and there *are* differences, even in the cloned abilities, which is neat indeed. I am honestly somewhat torn here and have probably spent too much time contemplating the final rating for such a short pdf – while the combined maneuver bonus-glitch is somewhat annoying, it is also part of the most interesting style-tree herein. The elemental-themed benefits are pretty similar, yes, but they also tend to bring something unique to the respective styles. In the end, I’m going to settle on a final verdict of a solid 4 stars.