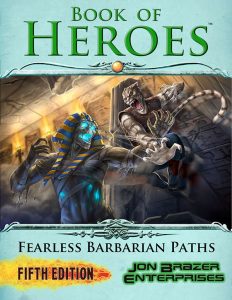 This supplement clocks in at 14 pages, 1 page front cover, 1 page editorial, 1 page advertisement, 1 page SRD, 1 page back cover, leaving us with 9 pages of content, so let’s take a look!

All right, so the second Book of Heroes-installment provides 8 new barbarian primal paths, with the Path of the Frozen Fury being the first….and it’s a rather interesting one: When you’re raging, you emit cold, and creatures that are within 5 feet of you at the end of your turn take 1d6 cold damage, which improves to 1d10, 2d6 and 2d10 at 6th, 10th and 14th level. This damage has no save, but is dealt automatically and rewards a harrier style gameplay, which is interesting and changes the roles of the character. It also means that allies must take care when nearby, adding a tactical angle. Like it! And yes, the barbarian is obviously immune to this damage. 6th level increases your AC by 2 versus ranged weapon attacks, and 10th level makes you immune to being frightened or poisoned while raging, and if already under such an effect, they are suspended for the rage’s duration. 14th level lets you score a critical hit with your weapons on a 19-20.

The Path of the Conqueror lets you use a bonus action when you hit in melee– the target must make a save (based on your Strength as key ability), becoming incapacitated until the start of your next turn on a failed Constitution save; one use per short rest interval, +1 use at 6th and 10th level. 6th level provides proficiency with Charisma (Intimidation), doubling the proficiency bonus if you already were proficient. 10th level provides immunity to being frightened, and 14th level extends this to being charmed. Also at 14th level, there is a mighty ability that lets you add +10d6 damage (Akin to Sneak Attack, this damage type is not codified) to a melee weapon attack – a successful Constitution save of the target halves this damage. You can’t make additional attacks the round you use it. This damage cannot reduce a target below 1 hit point, and may only be used once per long rest interval.

The Path of the Demon makes you grow horns (1d6 piercing) that you can use for an additional attack executed as a bonus action after using the Attack action with a weapon. This horn attack does not gain your ability score modifier to damage. At 10th level, the horns are treated as magical. Weird: The barbarian is RAW not proficient with horns. 6th level nets the ability to read, write and speak Abyssal and advantage on Charisma checks dealing with fiends and those with fiendish patrons/connection. 10th level nets you resistance to fire and poison while raging, and at 14th level, you grow demonic wings while raging, with a flying speed (incorrectly called Fly speed, but that’s a nitpick) equal to your speed. Wings can’t be manifested while wearing armor, unless the armor can accommodate them. Also at 14th level, when you enter rage, you deal 3d6 fire damage to all within 10 feet, with a Dexterity saving throw for half damage. The governing ability score for the DC here is btw. Charisma, in line with the 6th-level feature.

The Path of the Giant nets you +5 feet reach with melee weapons while raging and proficiency with Strength (Athletics), double proficiency if you already were proficient in it. 6th level makes you choose one heritage corresponding to one of the giant types: Choosing Fire and frost giant nets you resistance to their corresponding energy types, Hill giant to poison damage, and storm giant to lightning damage. Stone giant get rock catching, and cloud giant lets you cast fog cloud and misty step once per day. The latter should specify spellcasting ability and probably be based on rest interval instead of per day, but those are cosmetic complaints. At 10th level, we get rock throwing (30/120), 2d10 bludgeoning, using Strength; 14th level doubles ranges and increases the damage output by +1d10. Also at 14th level, you can expend a bonus action after making an Attack to force a creature you attacked (regardless of whether you hit) to make a Constitution saving throw or be pushed 5 feet away, more if it fails the save by 5 or more. Your save DC is governed, as suitable, by Strength.

The Path of the Pyrorager is not simply a damage-type-flip of the Path of the Frozen Fury; While raging, your melee attacks add +1d6 fire damage, which improves by +1d6 at 6th, 10th and 14th level. Odd: This specifically mentions that this damage is treated as magical. Plus, though: The ability does not stack with spells or weapons that deal additional fire damage. (Minor nitpick: A reference to a flame tongue isn’t properly in italics.) Rather powerful? Yep, but here’s the catch – you REALLY need to be careful with this one, for when your rage ends, you suffer one level of exhaustion! 3rd level nets you Ignan, but is a bit weirdly-phrased – it mentions proficiency, when 5e codifies languages usually regarding the ability to speak, read and write. 6th level provides resistance to fire damage, which upgrades to immunity at 14th level. 10th level nets advantage on Charisma checks when conversing with elementals speaking Ignan. 14th level provides a 30-foot line of fire for 3d6 fire damage, with a  Dexterity saving throw for half damage, usable once per long rest interval. Unfortunate: The line does not specify its width, which they need to do in 5e.

The Path of the Skald nets you 2 cantrips from the bard spell list, and begin with 2 spells known, increasing that up to 11. You get up to 4 spell slots for 1st and 2nd level, 3 for 3rd, and 2 for 4th spell level, and use Charisma as spellcasting ability score. You need a musical instrument to cast (somewhat weird, considering IRL skaldic tradition does not require them…) and you can cast damage-dealing spells while in rage, and you can add Rage Damage to the damage of your spells. Formatting nitpick: “rage damage” should be capitalized. The path also nets an inspiration mechanic (d4s), and targets can only use it to enhance damage. Kudos: This does clearly state interaction with bardic inspiration. At 6th level, you can use two uses of this feature to grant all allies within 30 ft., including yourself, a Skaldic Inspiration die. 10th and 14th level provide a bonus spell known, and 14th level replenishes your skaldic inspiration after a short rest as well, not just after a long one.

The Path of the Superstitious Warrior can perform a 5-minute ritual; after that, they can spend a bonus action to detect the location of any aberration, celestial, elemental, fey, fiend or undead within 30 feet, plus one use per short rest interval at 6th, 10th and 14th level. You can choose a creature thus detected and deal an extra 1d6 damage to it with melee attacks while raging. 6th level nets you an item that you believe will protect you from one type of creature you can detect via Superstitious Ritual. The item per se does nothing, but you get advantage on saving throws against spells and abilities of the chosen type. You can also use your reaction (to what?) to give an ally within 5 feet advantage on a saving throw against such a creature’s spells or abilities until the start of your next turn. 14th level nets you a second such item. These items don’t preclude you from wearing magic items, and replacement of lost items is covered. 10th level nets advantage on Wisdom (Survival) to track creatures chosen with the item, as well as on Intelligence checks to recall information about them. (I assume this pertains to both types once the second item is gained, but the pdf doesn’t specify this.) 14th level lets you temporarily emulate a type of movement that one creature detected via the ritual, allowing you to hunt down such creatures better – and no, this cannot be cheesed..

The final path would be the Path of the War Avatar. At 3rd level, when using the Attack action, you can make another weapon attack as a bonus action, with full ability modifier to damage. You can use this feature Wisdom modifier times before requiring a long rest to recharge it. 6th level provides a, well, not so cool – the first attack you make after entering rage nets a +10 bonus to the roll. Not a fan – even true strike just nets advantage!  10th level nets advantage on Charisma checks made to converse with celestials and fiends, and 14th level lets you choose one of the three physical damage types, granting you resistance towards all nonmagical sources of the chosen type.

Editing and formatting are good on a formal level, with only a few niggles. On a rules-language level, the pdf is precise for the most part, with only a few exceptions. It should be noted, however, that rules syntax deviates sometimes from how 5e usually phrases certain things. Layout adheres to a two-column full-color standard, and we get 4 artworks – two full-page and two half-page artworks. The pdf comes fully bookmarked for your convenience – kudos!

Dale C. McCoy Jr.’s barbarian options are a step forward in comparison with the fighter options in the last installment. The designs for the primal paths are bolder and genuinely change the playstyle of the class, which is a good thing in my book. While there are a few hiccups here and there, the options generally are interesting, with the possible exception of the final path, which I considered to be pretty underwhelming. That being said, the book does otherwise deliver a cool array of options, and while the minor hiccups prevent this from reaching higher rating echelons, this is still a barbarian option I can recommend. Hence, my final verdict will be 3.5 stars, rounded up.

If you consider my review to be helpful, please consider leaving a donation, or joining my patreon here. Thank you.