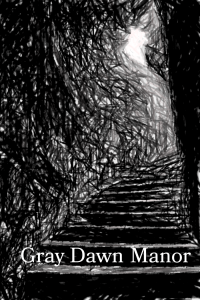 This adventure clocks in at 20 pages, 1 page front cover/editorial/ToC, leaving us with 19 pages of content, so let’s take a look!

So, what is this? Well, this is billed as an introductory module for a 5e-campaign focusing on “gothic and survival horror”, which is a genre I really like. The module is intended for 3-5 characters of levels 1st -2nd. But before we take a look at the module, we should talk about the supplemental content advertised.

The first of these would be a new sorcerous origin, the blood mage. At 1st level, you can spend your Hit Dice (these are formatted incorrectly as “hit dice”) to “impose advantage” on your next spell attack roll. You roll the Hit Die and subtract the number from your hit points – these may not be regained before you finish a short or long rest, and you can use this feature a number of times equal to your Charisma modifier before requiring a long rest. This attempt at a PFRPG-kineticist Burn-like engine is *really* weird, because your Charisma modifier is first HIGHER than your available Hit Dice to spend, and then becomes much lower as the class progresses. At 3rd level, you regain sorcery points equal to the number of Hit Dice spent when using this feature. Also at first level, you get to choose one of the Charisma-based skills chosen from Deception, Intimidation and Persuasion, gaining proficiency in it, or double proficiency if already proficient.  At 6th level, you can spend sorcery points equal to the spell’s spell slot to cast animate dead, danse macabre, negative energy flood, vampiric touch, provided you have access to the spell slot – these do not count towards your spells known, and can’t be cast at higher levels than the base spell. At 14th level, you can touch a creature that has blood, once per day (why not based on rest interval?) – the target must make a Charisma saving throw against your spell save DC, which it fails automatically if incapacitated, and the creature may continue to make the save every hour. On a failed save, the creature behaves like a zombie under your command. The effect lasts until you use it again, or the target makes their saving throw. If the creature dies while under your control, they automatically start their turn as a zombie under your control, without counting towards your limit for controlling undead. Limit? Animate dead has no such limit, save the requirement to refresh the spell, which does not apply here. This lets you theoretically amass a vast army. Of sucky zombies, but still. The 18th level feature makes you regain hit points equal to twice the level of any spell you cast. Okay, how does this interact with the Hit Dice-expending casting, or the sorcery point based one? No idea.

Okay, the “revised racial rules” essentially posits the idea to ignore ability score adjustments by race, and freely assign them. These are not stringent “rules” per se, and more very general, and very basic guidelines. Nobody needed those.

The pdf features one pretty lame amulet (essentially nets you +1 Hit Die), a rod that makes harmless light, and a story item. The module also provides 4 statblocks: On a formatting level, these are better than many I’ve seen: Things that are supposed to be bolded and in italics are, etc. One monster lacks the word “blind” missing from (blind beyond this radius); formatting for saving throws in NPC-features is incorrect, and there are errors in the NPC statblocks: Incorrect HD, saving throws and skills off by 1, incorrect attack values. I’ve seen worse, but considering how basic the stats are, this is not something I can ignore.

Okay, so, here’s to hoping the module does better! As an introduction: The adventure is set in the world of Ardyth, which does use the deities from the Forgotten Realms – these may be WotC-IP, so I’d recommend that the author changes those, but more regarding the module: Formally, we get b/w-maps of a very basic level, which is one of the things that hurts the adventure. Why? Because the maps a) lack player-friendly versions, and b) lack a grid (or any notes telling us about the dimensions of the eponymous manor) – this becomes particularly problematic in the module’s finale. The adventure also sports no read aloud text, so if you struggle establishing a creepy atmosphere, something plenty a GM struggles with, don’t expect much in the way of help from this adventure. Text is presented in pretty chunky blocks, with key items bolded and italics, monsters in bold, and inscriptions etc. in italics. Traps are included in these run on textblocks and don’t adhere to the proper formatting conventions. This is NOT a module you can run without copious use of text markers and prep-work.

Okay, from here on out, we’ll discuss the module. Potential players should jump ahead t the conclusion.

Okay, only GMs around? Great! So, the characters wake up in the middle of being sacrificed in some dark ceremony by 7 figures– when the characters wake up, the leader is upset, and drags a cultist outside. This would mean that 5 remain, right? Wrong: Another figure needs to leave with the leader, but the module doesn’t mention that. And the very first check deviates from 5e’s rules: The bonds that hold the PCs can only be escaped with a DC 10 Athletics check, when escape DCs, manacles, etc. also allow for the use of Dexterity.  Weirdly, the dumb cultists seem to not have bothered stripping the PCs of their gear, so the 4 remaining cultists will probably have their behinds handed to them. If the PCs return to this room, two minor blood oozes (the creature mentioned above) spawn. Why? Well, they just do.

The first part of the module, then, is about escaping the dungeons in which the PCs find themselves – the crypts of the Grayden family. Depending on what you expect regarding “Survival Horror”, this’ll be interesting, for it does indeed fall into this category: The crypts feel primarily like a Resident Evil-scenario: We have inscriptions providing obvious clues, and while the dungeon doesn’t look linear, it actually is: The doors here are sealed and may only be opened when the proper light shines upon them – as such, the PCs accumulate a variety of colored crystals to make their way through the dungeon. While this may feel video-game-y to some, I actually found this to be an often underused angle, and generally liked it. Annoying and confusing, though: The violet tomb erroneously refers to the hall leading up to it as “green”, when that should be “red.” And before you ask: No, the GM map does not note the colors of the respective halls/tombs – my first advice here is to actually note those on the map.

Once the PCs have escaped the small 9-room dungeon, they’ll be in the eponymous Grayden Manor: The lead cultist, Alexis, turned crazy when his darling sister died, and killed his parents, reviving her as an undead. Blood mage apprentices and cultists, a mastiff, etc. await, and if the PCs were diligent in their exploration of the tombs and the house, they can unearth some hints that can help make the boss fight against the pair of siblings easier. The PCs, provided they have found out “enough”, they can “trigger a moment of lucidity” and cause the undead lady to burn down the manor. Okay, what is enough? The module doesn’t even provide the most cursory of guidelines here.

That being said, the module does take various ends into account, including the party escaping via one of the various means of egress from the manor. The most likely outcome, though? The house burns – and it burns FAST, as it seemingly is made of kindling. It burns down and collapses (!!) within 10 rounds! The module provides a round-by-round breakdown of which rooms catch fire, which is per se nice. This breakdown does assume that to happen in the finale though – even though the PCs can start the fire in a completely different room, for example by severing the ropes holding the chandeliers in the great hall. If they do that, defaulting to the fire progression from the finale makes no sense. There is a further issue here, apart from the formatting problems: Moving through the fire undamaged, oddly, doesn’t use Acrobatics…and then, there’s the biggest issue, which you’ve already guessed if you paid close attention. We have no scale. It’s a tactical round-by-round breakdown of the house crumbling, and we have no idea how much room the PCs can cover each round! Sans scale, this becomes an exercise in GM-fiat.

Editing and formatting are promising, but ultimately wanting in quite a few instances – both on a formal, and on a rules-language level. Layout adheres to a 1-column b/w-standard sans frills, and the pdf has no artworks apart from the striking and really cool cover. The module is missing player-friendly maps, and the cartography’s lack of scale and other somewhat inconvenient decision is a downside. The module is also missing bookmarks, making navigation inconvenient.

I wanted to like Thomas Passwater’s freshman offering, and in a few instances, I did – there’s a solid module in here, but it’s one that needs you to deal with a lot of hassle, from the color puzzle not noted on the maps, to the opaque finale to the lack of read-aloud text, this is a very raw offering. It’s not without promise, and it genuinely pains me to do so, but as a whole, I can’t rate this higher than 2.5 stars, and even the freshman offering bonus does not suffice to round up here.