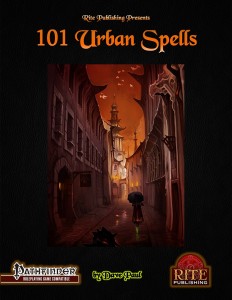 The latest, massive book of Dave Paul’s terrain-centric spell-collections clocks in at a whopping 50 pages, 1 page front cover, 1 page editorial, 1 page SRD, leaving us with a massive 47 pages of content, so let’s take a look!

This review was moved forward in my review-queue as a prioritized review at the request of my patrons.

Okay, so at this point, I have to quite frankly admit to being giddy like a school-girl whenever one of these terrain-centric spell-books by Rite Publishing hits my review-pile. At a point where I honestly considered the topic of spells to be done and covered, these spells have, time and again, blow me away by their precision and unique concepts – and similarly, this one begins with a rather exciting mechanical innovation: We take a look at settlement-sizes and their size-modifiers, which range from -4 to +4 – it is said size modifiers and settlement sizes that directly influence how the spells contained herein work. Additionally, some of the spells contained herein are designed to appeal explicitly to uncommon caster classes and combinations – like arcane tricksters et al.

The pdf codifies spells by class and level before diving into the main meat of the product – the spells. And from the get-go, I’m smiling: Acrophobia instills fear of heights; Alight the Holy Terrace duplicates Word of Recall, but saves only you and dumps you at the stairs of a church, later even inside – we’ve all read comics where the hero, battered and bruised, escapes and crashes in front of a church, to be found in the middle of the night. So yeah, sold! The third spell herein increases your chances of finding extraordinary treasure – and this is more exciting in practice than in theory…how did the item get here? Why is it for sale in the first place? This is a means for the GM to give the players what they want sans breaking the rules AND facilitates introducing new plot-lines. Gold.

The second level spell Ameliorate Disease is a bit of an odd duck – on one hand, it is a clear power-creep that allows for easier, sooner disease-control. At the same time, it applies the settlement modifier and does not prevent re-infection and costs gold. This may actually, for more grim settings, be a better default spell than the regular magical means of dealing with disease. (and yes, tehre is a poison-variant of this one in here as well…)

Blasphemous Aura is a game-changer of a spell – at 3rd level, this one allows for the hampering of divine magic and channel energy, both of which now have a chance of failure while inside the emanation. The spell sports a warning sidebox – though personally, I don’t consider it problematic: You see, for one, fiction sports ample instances where proximity to a particularly viable creature, be it a servant of the elder gods or a powerful undead, hampers spellcasting for divine characters. Secondly, the conservative AoE ultimately results in the spell being of an appropriate power-level for 3rd level spells. Thirdly, as any GM who has faced a channel-centric character (like a divine channeler) in the hands of a power-gamer can attest, the lack of a decent countering mechanic for the Su is a rather obvious hole in the rules-context. So yeah, as far as I’m concerned, I’ll be adding this spell to the arsenal of quite a few of my adversaries. If you’re still somewhat hesitant – my Scion of Discordia-class in Interjection Games’ Strange Magic was playtested for months and features similar lock-down abilities, so no – this does not break your game, though admittedly, it may make bastions of churches and casters less secure…but at least in my book, from a narrative point of view, that’s a good thing.

Speaking of specific spells that really make a GM’s job easier – Can’t Leave Town is the spell-representation of the delightful horror-trope, where you try to leave a settlement, only to re-enter it. Similarly, versatile Columns of Smoke can make it rather easy to escape…and notify allies/send signals. Of course, there would also be spells herein to conjure forth constructs of filth and loathsome debris to squash your adversaries (and even merge them in the case of more powerful variants). There would also be a spell that allows you to place a ring on the finger of a target to compel the target to only deal nonlethal damage – this makes so much sense for the punishment options of a society wherein magic exists. Similarly, nonlethal force-based means of dispersing crowds make sense as magical riot-control.

Calling forth dogs or summoning cockroach swarms can be found here – as can be a cantrip to dry clothes. There also is a rather nasty one that allows you to fear on the fear of crowds, consuming it and converting it into personal power – a neat magical representation of instigators feeding on fear. There is also a particularly interesting spell called Fortune Teller’s Curse – this one nets you insight into past, present and limited prescience and is VERY powerful – but it also represents a way of burdening a PC and adding unique means of enhancing investigations…at a price that will make the PC want to get rid of it. I’d consider this one problematic, were it not for the warning. Rather interesting from a story-telling perspective: Gleaning information from graffiti! Making mirrors Narcissus-traps or traveling by them. Illusion-based misdirecting vapors or becoming Nondescript is interesting – and what about a spell called Persistently Unconvinced that installs a conviction in the mind of the adversary that he’s not really in danger – this does look wrong, right? A kind of illusion, surely? In the hands of a halfway decent illusionist, this makes for a lethal smoke and mirrors game!

Better roof running, scrying via mirrors in various iterations or conjuring clothes from the stuff of shadow. Gold for any storyteller and a seed for unique culture – there is a spell that allows you to transfer diseases and poison from the living to the undead. This little spell makes for a viable reason why undead are kept around; it allows for a “benevolent” undead overlord to heal his subjects for just a small price; it provides a justification for people to actually serve undead or tolerate necromancers. I love this. Teleporting through crowds and conjuring weasels forth to steal keys for you…oh, and there actually are multiple spells that deal with structures – from collapsing roofs to crews of vexgit wreckers. Oh, and I really like the curse that makes the target verbose when trying to deceive…

Dave Paul has singlehandedly reignited my excitement for new spells. After more than 2000 spells read, I was, quite frankly, bored by most such books. When Dave Paul came along and began crafting not only exceedingly precise and complex spells, but actually started innovating within the frame work of what spells usually do – and he expanded his game. So far, not a single one of these books is anything short of pure excellence – and this is no different. Using settlement size modifiers here and there is pretty interesting and, for the most part, the magic herein is MAGICAL. It feels like magic.

You won’t find bland “deal x damage” spells herein. If you’re looking for those, open just about any pdf out there and look for the spell-section.

What you’ll find is themes, flair, complex options and spells that inspire whole modules, perhaps even campaigns – this book practically demands being inserted into any urban campaign – from Road to Revolution to Curse of the Crimson Throne to Council of Thieves and beyond, this pdf enhances the game, innovates mechanically and provides precise, complex spells that get their wording right. Where something can be problematic in contexts, the pdf warns you, even in cases like the anti-channeling where I’d issue no such warning myself. All in all, this continues Dave Paul’s streak of absolutely stellar spell-books, cementing the series further as the unquestionable benchmark for what good spellbooks can and should do. My final verdict will clock in at 5 stars + seal of approval, given without any hesitation. Stellar!

You can get this superb pdf here on OBS and here on d20pfsrd.com’s shop!
Endzeitgeist out.