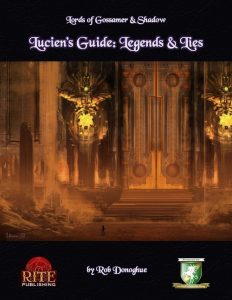 This installment of the Lucien’s Guide-series for Rite Publishing’s critically acclaimed Diceless system clocks in at 18 pages, 1 page front cover, 1 page editorial, leaving us with 16 pages of content!

This pdf, presented as an account of famous Lucien, depicts various legends and ominous tales that make their rounds among the blessed beings capable of navigating the Grand Stair – generally, the respective entries begin with a brief legend that can be encountered, to then go on and discuss the truth…or one of it, behind the respective legend. The first of these we encounter would deal with Doorghuls – the legend of mimic-like creatures, masquerading as doors, waiting to swallow hapless travelers…

The second legend herein is a more complex one and one that will bring smiles to fans of the Dark Tower – it pertains the Fall of Gilead, reimagined as an inconceivably powerful world, one possibly shut down or destroyed by the Dwimmerlaik…or…well…perhaps they have chosen isolation? Instead of King’s gunslingers, the fabled champions of this iteration of Gilead were the paladins and we do get concise rules for the 57 point paladin armor as a sample relic of fabled Gilead. By the way, have you heard about the darkened doors, that seemingly can’t be opened, sealed from one side or another? For what reason, none can fathom…

Know how the Grand Stair is reasonably free of detritus? Well, in the drowned expanse, this is not the case, with partially and fully submerged doors leading…somewhere. To be more precise, the realms of a once unified lizard-like people called the Notar -and these fellows, as a whole race…can NATURALLY navigate the stairs. It’s not rocket science to grasp the implications of such a race existing…and lets you gulp when thinking about the progenitors that engineered them. Lucien, btw., does not believe in the Old Ones that presumably exist beyond Eidolon and Umbra.

If you’ve read my review of the Gossamer World detailing the ramifications of colonization by the Incursion, you’ll already be familiar with some of the problematic implications of this empire – which consider the Stair foremost a logistic problem – one they are methodically solving, step by step…and sure, their empire may have collapsed…but perhaps, they are just preparing themselves to rise…this time, with magic as well.

The legend of the infinite door is dismissed pretty quickly, but the nature of dragons and their interaction with the Stair…well, let’s just say it’s hard to find reliable sources. Oh, btw. – there is a section of the Grand Stair called God’s Passage – where doors range from 60 ft – 200 ft….and if that doesn’t unnerve you, you probably are a fool…particularly since they all lead to dead worlds, burning under a red sun. The pdf also talks about the forest of doors and Old Man Cavendish, who has lived through all tragedies of the Stair. Really cool: The cupboards – think of the Grand Stair, but only for interconnected cupboards…as though for mice or similar beings…

Finally, the pdf talks about broken stairs – the hypothesis being that the Grand Stair may shed sections of it, which then tumble as separate entities through time and space, but continue operating on a smaller scale…which is narrative gold.

Editing and formatting are top-notch, I noticed no glitches. Layout adheres to Rite Publishing’s two-column full-color standard with ample of high quality, glorious full-color art and the pdf comes fully bookmarked for your convenience.

Rob Donoghue’s Lucien’s Guide to Legends and Lies is a truly inspiring read that provides not only ample intriguing ideas and narrative potential, it also lets you ask some important questions pertaining the nature of the Grand Stair, while providing an indirect glimpse at the psychology of those that travel its expanses as a social entity. This is an inspired pdf and well worth a final verdict of 5 stars + seal of approval.

You can get this inspiring guide here on OBS!
Endzeitgeist out.