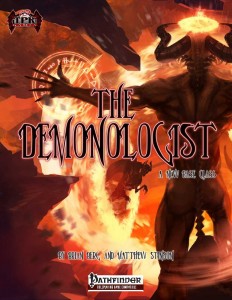 This massive new base-class clocks in at 59 pages, 1 page front cover, 1 page editorial, 1 page SRD, leaving us with a huge 56 pages of content, so let’s take a look, shall we?

Chassis-wise, demonologists are a hybrid of summoner and witch, need to be non-good, get d8 HD, 2+Int skills per level, 3/4 BAB-progression, good Will-saves, proficiency with simple weapons and cast arcane spells of up to 6th level drawn from the witch’s list and the spellcasting seems to be governed by Charisma. Seems to be…does not sound good. And indeed, I’m not sure whether this is supposed to be prepared or spontaneous casting – and yes, this frustrated me to no end, since it means the class is impeded in a component of its basic functionality, to the point where I can’t properly playtest it. Worse, this extends to the cantrips – the class fails to specify how many of those you’ll get. *sigh*

At 1st level, the demonologist receives 3+Cha-mod uses of Summon Demon as a SP, with a duration expanded to 1 minute per level, increasing the potency of the spell by +1 at 3rd level and every 2 levels thereafter, with 19th level capping via the option to duplicate gate, though this still requires the material component and only one such effect can be in place at a given time to prevent the spamming of the ability. Handy lists of critters to be summoned with the diverse SPs are provided for your convenience.

The class also obviously features an eidolon stand-in, which, in this case, would be the demonic servant, which, as a summoned creature, adheres pretty much to the same limitations as the eidolon. The demonic servant sports d10 HD (with a 3/4-progression) and similarly sports a 3/4 BAB-progression. Demonic servants choose two good saving throws and one bad one and begin play with two skill-points and one feat, scaling up to up to 60 skill points and 8 feats. The total armor bonus of the demonic servant may be split among natural and regular armor bonus and scales up to +16, though the demonic servant may not wear armor beyond what this class feature grants. The evolution pool scales up to 15 points and the maximum number of attacks caps at 7. Demonic servants begin play with Darkvision 60 ft. and a link-ability (once called “link” and once “infernal link”) as well as share spells. Second level nets evasion (14th: improved evasion) and 5th level and every 5 levels thereafter bar the capstone level 20 provides an ability score increase. 9th level provides Multiattack and 6th level a +4 to saves versus enchantments.

The basic framework of the demonic servant is also determined by the base form: Bebilith, Demon, Contracted Devil, Fallen Angel, Nightblade, Salamander and Qlippoth are available. These forms determine the base forms and also have base evolutions. These servant types also determine bonus spells and 4th, 8th and 12th level provide bonus abilities that include SPs, evolutions and DRs. 20th level also provides a unique ability for the respective demonic servants.

Starting at 2nd level, they have a Demonic Circle, with a diameter of 5 ft, increasing the diameter by +5 ft at 5th level and every 5 levels thereafter for a maximum of 25 ft. at 20th level. Creating a demonic circle is a move action that can be used 1+ Cha-mod times per day. Places circles cannot be moved once placed, though it can be dismissed as a free action. Unless otherwise noted, effects of circles last for Cha-mod rounds and a given circle remains in effect for class level rounds. Demonic Circles can be dismissed via Dispel Magic and outsiders seeking to pass through the circle need to make a Will-save versus 10 +1/2 class level + Cha-mod to do so. Demonologists are immune to the debuffs caused by their own circles, but their servants and allies are not. A given demonologist can only maintain one such circle at a given time, though multiple demonologists may overlay circles.

At 2nd level, 3rd level and every odd level thereafter, the demonologist also learns a so-called circle power and generally, they are interesting – the effects to be chosen range from synergy with hexes to negative energy damage to defensive buffs – which oddly, in one instance, include resistance against a chosen energy, including negative energy or force damage, two energies which usually are valued higher than the elemental damage types. Admittedly, that’s a minor, aesthetic complaint, but still. Pretty interesting would be the option to use a circle power to enhance a cauldron used in brewing potions: Thereafter, the thus enhanced potion also affects the demonologist and his servant upon consumption, provided they are within 30 ft. of the imbiber. The circle powers diverge in power rather significantly: Automatically rendering targets flat-footed, no save, is pretty strong, even when taking the limited AoE into account. Off: Circle Powers may scale, but there are some “greater circle powers” – which I *assume*can be taken at 10+ levels, but I’m not sure – the pdf fails to specify when they’re unlocked, though 14th level provides the “Greater Circle” ability, which otherwise is missing from the pdf.

Similarly, when hexes are gained, table and text contradict one another – which is, again, pretty bitetr since the respective new hexes provided tend to get complex abilities right…on the other side, there are SUs that duplicate spells sans specifying caster levels for the respective effects. There also is a hex that grants you limited flight sans the base hex’s limitations, which is a bit odd. In a particular odd formatting choice, the hexes sport the “major hex” header twice. At 19th level, demonologists can make permanent circles and as a capstone, the demonologist can tie his lifeforce to his personal circle as well as benefit from an apotheosis.

The class can choose from several archetypes: The Fiendflesh disciple replaces the demon summoning SPs with scaling fiendflesh armors – which is pretty great, though it does get the precise wording for the mixed energy type breath weapon down slightly more wonky than it should be. Infernal Traitors walk the thin line, trying to sabotage the forces of darkness from within – as such, he may conjure forth good creatures and may not be lawful. On the problematic side, the archetype learns quicker summonings, which open a can of worms regarding the actions available for the creatures summoned -how many do they get? The summoning powers replace the circle progression.

The Sacrifist gains a metamagic feat instead of circle powers, though these require the use of blood sacrifice of either the sacrifist or creatures called, though I literally have no idea how this self-damage component is supposed to work, and neither are my players. Furthermore, the sacrifist can call creatures and stab them to power his magic: Which works as a sneak attack…kind of. The called creature is treated as helpless and is subject to sneak attack-like damage…though I’m not sure whether that ought to be precision damage or not. Similarly, sentient mortals may be sacrificed and here, there are pieces of info on self-sacrifice/self-inflicting damage. I like the idea, but in play, this works surprisingly badly – the damage-output of the demonologist and the whole mechanic grinds the game to a screeching halt and can often lead to time-consuming battles with your own called creatures. Zakyas are pretty much the rakshasa-themed archetype provided herein, with a modified servitor that takes the shape of a piece of treasure – which completely changes how the servitor works and a complex template scaling with the respective rakshasa’s progression. Additionally, multiple choices pertaining the thematic focus generally make this a cool, complex archetype.

The pdf provides a wide array of new feats and favored class options, the latter of which extend to numerous non-standard races. On the feat-side, self-inflicting damage to power metamagic (with an anti-abuse caveat!) can be found alongside a feat that lets you turn penalties incurred by pain effects into benefits. E.g. gaining Vanish when your servitor crits is interesting, though CL-info would have been appreciated.

The pdf goes on to provide an extremely detailed spell-list, including sources – so much work and passion put into this…it breaks my heart. The pdf also provides a selection of information regarding demon possession as an acquired template which includes benefits by demon – pretty damn cool! The pdf also provides a selection of nice spells as well rules for the abyssal steel material and the Butzemonn books, which generate haunts that feed off Cha and increase in power, with certain classes being able to control the effects.

Editing and formatting are, unfortunately, deeply flawed: There are not that many formal glitches, but lacking italicization of spells, confused headers and similar inconsistencies make this book harder to use than it should be and even impede core functionality of the content herein. Layout adheres to a beautiful 2-column full-color standard with some awesome pieces of full color art. The pdf comes bookmarked and with hyperlinks.

This is one of the reviews that breaks my heart. Brian Berg and Matthew Stinson have crafted a class that OOZES style, that practically demands being used. The demonologist and its options sport several unique, damn cool options and is even innovative in several instances. I *really* like this class…or I want to…but can’t. You see, this class does not sport a single component of its core mechanics that is truly functional – from spells to cantrips and hexes, even the base functionality is impeded to the point it doesn’t work. The issues in the details pale before these glaring problems, though they can be found as well…alongside fully functional, working pieces. I don’t get this pdf…I really don’t. On one hand, this looks professional in a significant array of the most complex of options and shows that the authors can get the rules-language right…only then to stumble over the most basic things in the worst way. Worse, from what I can see, the class per se looks solid – I’m pretty positive this *was* playtested (though some options diverge in power-levels pretty significantly) and this certainly looks like a passion-project and oozes heart’s blood. It’s horribly frustrating for me as a reviewer to then have to say that this class, alas, fails its task.

The demonologist can be salvaged, it can be fixed; the supplemental material is cool and this pdf does have potential; it does show work and passion and has style…but it also is rushed, flawed and really would have required a capable developer/rules-editor to streamline and make it work as intended, sans those avoidable issues. As written, try as I might, I can’t rate this as functional – it’s simply RAW not; it’s exceedingly, frustratingly close…but yeah. Hence, my final verdict can’t clock in higher than 2.5 stars, rounded down to 2 for the purpose of this platform.

You can get this inspired, but very flawed class here on OBS and here on d20pfsrd.com’s shop!
Endzeitgeist out.