The House of Red Doors (DCC)

The House of Red Doors (DCC) 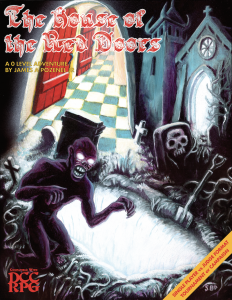 This module was moved up in my reviewing-queue due to me receiving a print copy of the adventure. My review is mostly-based on the perfectbound softcover, but I also consulted the pdf-version.

So, first of all, what is this? Well, it’s a 1-on-1 0-level funnel for one player, 2-4 characters. It is, this, a pretty good fit for the current times to get your gaming fix. 😉 Structurally, it should be noted that the module can actually be used rather well to bring a 0-level character up to 1st level, should this be what you need. As always, the module comes with read-aloud text. This deserves special mentioning, for unlike many an adventure, the module’s rewards are somewhat unique and make sure that the freshly-leveled 1st-level character will have something unique to make them feel more distinct. I really liked seeing that, since many games get that wrong and don’t account for the addition of unique abilities, tricks, etc. while adventuring, making new characters often feel a bit sterile.

Additionally, it should be noted that the module can be run as a tournament adventure, with a full and proper scoresheet; unlike many tournament modules, this is NOT a meat-grinder; it’s still a DCC-adventure and as such, it’s bound to be dangerous, but this is not about killing off characters per se. It requires player-skill to solve, more than it does require rolling high. That’s a good thing as well. Unlike many comparable adventures designed for tournament-play, this adventure has a pretty smart angle for non-tournament use: You see, the scoring of points determines the rewards: The more points you score, the higher the die-size will be that you get to roll on one of the 7 (!!) reward tables. These can include a change of the Birth Augur, the ability to beg for a boon from the fates once per adventure…or, well, if you sucked, you might “just” end up with a C-Cell from MCC, or a pamphlet promising bigger muscles and whiter teeth from this mysterious place in New Jersey. (Though you really have to be unlucky to get a low result.) Why do I like this so much? Because it makes what otherwise would be dead space for non-tournament play MATTER. Smart.

The module also offers a quick character background story generator focused on three guiding principles that impact the adventure – Cause, Theme and Goal – there is one 6-entry table for Causes and Themes, and there are 6 1d3-tables for Goals. All of these note an aspect, and a symbol, and they also feature on the big player-handout, which deserves special mention: It’s a two-page handout featuring space for notes on the background story of the character and the entire set-up of the module, with these tables on the back. Why do the Causes, Themes and Goals matter, beyond rewards? We’ll get to that below.

But first, I have to explicitly call out something as thoroughly refreshing. If someone asks me what I *don’t* like about DCC, my response is always the same:

“DCC modules tend to have these GORGEOUS maps and artworks – and yet, the maps are often littered with SPOILERS. You usually can’t show the players the amazing isometric maps without giving away things due to annoying secret door S-indicators, without map labels spoiling things. Player-friendly maps should be industry standard – right now, the map-budget of most DCC-modules is wasted on entertaining only the GM.”

It’s a matter of proper priorities, and guess what? This module *has* them right. 6 isometric maps (!!) and 4 artworks are presented in the back, in a mini-handout page, which includes printing and folding instructions. Yep, these are player-friendly. You can actually hand them out to your player(s). Upon seeing this, I raised the good ole’ metal salute to the air and audibly exclaimed a “Hell yeah!” Further evidence of priorities done right would be the center spread: 2 pages of artwork depicting Lotteria cards – I’ll explain their function below.

Now, regarding themes, the module is not one of the goofier DCC-modules; instead, it has a very distinctly occult atmosphere, and one that can be likened to a metal-version of a shamanistic journey, with a nice dose of the weird and frightening thrown in. I’d run this in pretty much any setting that focuses on dark fantasy or horror-themes, or in sufficiently gritty regular fantasy. The occult angle deserves special commendation, as it’s much harder to get right and consistently done than regular weird fantasy or science-fantasy.

Okay, and this is pretty much as far as I can go without diving into SPOILERS. Potential players should jump ahead to the conclusion.

All right, only judges around? Great! So, a rickety, ornately-decorated house with diamond-paned windows, dormers and turrets, black-enameled terra cotta roof sweeps and cupolas in gold is drawn by elephants in the blood-orange dusk – Jassafae’s House of Red Doors bids those welcome seeking their fortune, and not all shall emerge from its crimson doors. Jassafae, mistress of fate, draws cards, and the Lotterria is begun – the background of the PC will determine the interpretation of what happens in the module. The generator mentioned before allows for the swift interpretation in a tournament context, but both takes on the Lotteria are explained well and in a stringent manner – as mentioned before, two pages provide symbols on a vast variety of cards, with different notes per symbol – depending on the context, a lantern could be likened to destiny, for example. The symbology behind the Lotterria is clearly defined and explained for the judge. From a roleplaying side of things, the interpretation of this cool angle sets the tone and internal logic of the supplement rather well.

Once the reading is complete, the PC will receive a pouch from Jassafae, with the note not to open it – and venture through the red door, where three tasks await: The first is a darkened village, where a strange ghoul with radiant eyes makes for a deadly guard in the lichyard – on this place, the gravestones feature symbols corresponding to the Causes, and open graves beckon – choosing the correct one corresponding to their Cause as explained by Jassafae is the best course here.

After this, the PC will arrive at a crossroads, where roads of straight granite, silver gravel and sinuous gold meet, and where three strange individuals await; one of these people will hold a pillow, atop which a mirror rests – each of the humanoids corresponds to alignments, and as such, the task here is to properly judge the Theme ad interpret this: The mirror of Jassafae is a sort of wildcard, but careless PCs may have their pouches stolen…

And then, the module branches. Big time. 6 different trials, each with their own map and challenges, await the PC, each corresponding to one of the Goals determined in Lotteria: If power was chosen, the PC will find themselves in an arena and face a metallic, winged bull, with hopefully the proper weapon; if reciprocity was chosen, the PC will have to retrieve the correct item from a spinning sphere that holds three balance pans. The trial of wealth is all about the PCs retrieving strange fruits, with poisonous aphids awaiting…and did I mention, for example, the living city of fungus? Each of these trials does something rather clever: The mirror of Jassafae can be employed to help in these tasks, and each task can be solved in multiple ways: If the PC properly understood the rules that govern this strange journey, they will emerge in Jassafae’s sanctum – but if they fail, a possibility throughout this module, there is always the chance of ending up in a charnel pit, where the only exit is a potential trap door – and if finding this fails, well, then the PC will join the corpses.

In short: While, there is a chance that the PC fails due to combat, the main deciding factor regarding triumph or loss, ultimately, is the skill of the PLAYER. Big kudos.

Editing and formatting are very good on a formal and rules-language level. Layout adheres to a two-column b/w-standard , and the module provides plentiful b/w-artworks drawn by Stefan Poag, Doug Kovacs, Del Teigeler and Robert Cameron – in short, this is, visually, in line with Goodman Games’ modules. The cartography deserves special mention – isometric, cool, and, better yet, player-friendly? Awesome. The abundance of handouts also is an amazing factor. The softcover is a well-crafted module, and personally, I’d recommend that version, if you can get it – also due to one annoying comfort-detriment the pdf-version suffers from: The module has no bookmarks in its pdf-iteration; for this version, you should detract 0.5 – 1 star, depending on your priorities.

James A. Pozenel, Jr. delivers a fantastic solo-adventure that takes place in a mysterious locale; the main achievement of this book is twofold: It manages to retain a very high replay value for judges and players alike. Secondly, it manages to establish its own symbology and dream-like logic, and do so in a way that makes an intrinsic sense to players and judges alike. The latter is actually a VERY difficult thing to pull off, and the author has my sincere thanks for this. The replay value offered also means that you can reuse this as the campaign starter a couple of times when your PCs bite the dust. This internal logic, and the finely-tuned challenges both definitely show that this module was thoroughly and extensively playtested. Oh, and guess what? Once you’ve internalized how the Lotterria works, you can actually run this with pretty much 0 prep work.

In short: This is a fantastic 1-on-1 adventure, a resounding success, and I seriously want to see more! This dream-like, occult tone is right up my alley, and structurally, this is excellent as well. Atmospheric, novel, and with priorities where they should be, I have nothing to complain about, and genuinely look forward to the next time that I get to act as a judge for this module. My final verdict is 5 stars + seal of approval – highly recommended, and frankly, good enough to be worth converting to other games.

The limited edition print copy can be ordered by contacting the author: lectrotext at gmail dot com.

The pdf copy can be found here on OBS!