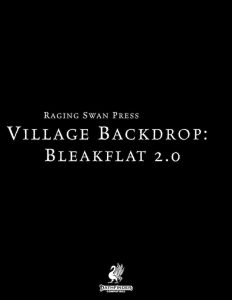 This expanded version of RSP’s Village Backdrop-series, available for the first time in PF2, is 13 pages long, 1 page front cover, 2 pages of advertisement, 1 page editorial/ToC, 1 page SRD and 1 page back cover, leaving us with 7 pages of content, so let’s take a look at the settlement!

The settlement’s nice little marketplace section has been properly adjusted for PF2, and we get the classic notes for villager appearances, dressing habits and nomenclature. As always, we receive 6 whispers and rumors that help keep the PCs on their toes/drive along proceedings and village lore. I’d have liked to see the rumors perhaps integrate a bit better with PF2’s (critical) success/failure design-paradigm, but skill-wise, the correct ones to glean the pertinent information are employed.

Cartography is provided by the expert skills of Maciej Zagorski. Notable locations include various families and their interaction with their somewhat “benevolent” overlord. Anyways, the pdf sports some seriously nice b/w-artworks of the dilapidated hovels, and the expanded version now comes with full elaborations regarding trade and industry, and the section on customs and traditions does come with a potentially creepy and interesting angle. The dressing/event table has been expanded to a full 20 entries, which is a big benefit regarding the ability to make the place come alive in a dynamic manner. We also get quite a bit of information regarding the surrounding locality. The pdf includes a selection of 6 NPCs, presented in Raging Swan Press’ usual flavor-centric standards, but without much detail regarding mechanics – considering that PF2 is a young system and that this was released prior to the NPC-building guidelines, that’s okay, but in the long run, getting some unique attack options or abilities would at least be nice.

Did I mention the blood baths…oh, and the bleakwood, where the vampires sometimes hunt for the thrill and sport of the chase? Yeah. They’re vampires. What did you expect? Sparkling? Regarding his psycho-kid: The pdf remarks “Aldrich hopes this is just a phase.” This sentence, usually connotated with parents talking about their goth/punk/whatever kids perfectly exemplifies the mindset of the master of this place and really made me smile. Oh, and obviously, horses are not used for riding round here – they are food for the roaming giant bats… As far as system is concerned, I do think that blood baths and the local customs would have benefited from stating them in PF2’s manifold mechanical options.

Jeff Gomez’ Bleakflat is interesting in that its theme of decrepitude is supplemented by a leitmotif of conflict between generations and a bit of social commentary, if you’re inclined to read that into the supplement: The population needs their master to survive, but at the same time is slowly destroyed by him. Sounds pretty much like dominant employers in remote communities everywhere to me. Anyways, the settlement is nice, has some thematically consistent angles and can go in several ways, depending on the morality of the PCs and how the GM elects to depict the situation – from full-blown horror to shades of grey “lesser of evils”-gameplay, there is a lot of potential here. The PF2-version of the revised edition had a chance to add some interesting mechanics, which seemed very much like a sensible idea as far as I’m concerned, but the new flavor is nice. In a way, this is a “straight” conversion – it translates what’s here, but doesn’t really dive into the options that PF2 has available. That being said, in this instance, it didn’t necessarily have to do that in order to remain compelling – that would have elevated this to seal of approval levels, but oh well.

This is still a very compelling and fun village, and while this loses points for being a pretty linear conversion, it’s also the first time Bleakflat’s available for PF2, which is why my final verdict will be slightly more lenient and clock in at 4.5 stars, rounded down.