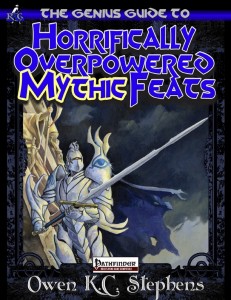 In case you’re new to the concept – first released on April 1st, these horrifically overpowered feats are essentially feats on steroids. Scratch that. Know the Batman villain Bane? Yeah, they’re more like his drug of choice, venom, injected in copious quantities into feats to create brutes. Owen K.C. Stephens back in the day wrote “No one should use these” – well, people don’t listen, do they? In fact, I wasn’t alone in considering them great tools for legendary foes, high level bosses etc. Rite Publishing’s much-lauded NPC-series “Faces of the Tarnished Souk” (If you haven’t checked these one out, you’re missing something!) made use of them in some builds and indeed, they do adhere to a power-curve. A horrifically powerful, weird power-curve of dynasty warrior-like proportions, but a power-curve nontheless – and for some truly high fantasy games, they were just what the doctor prescribed. Then along came superpowered mythic gameplay and these suddenly felt even less “utterly broken” – “broken” perhaps, but still. They certainly did see use in some games in know of. Mythic = challenge accepted here and thus, we get horrifically overpowered mythic feats now – to teach mythic PCs (or Cthulhu-level foes) some humility.

What do I mean by this? Well, let’s take a look at the first feat, Acrobatic, as an example: Taking this feat allows you to roll a maximum of 1 acrobatic or fly-check per session, all others counting as 20s. You may roll, though, and on a 15+ on the roll, you may potentially stun non-mythic adversaries. Yeah, that level of power is what you’ll get. What about adding evolutions to ALL your summoned creatures, allowing you each day to select the evolutions in question?

What about a bleeding critical that dispels a target’s invisibility, makes the target potentially slip on their own blood or even blind them. Of course, there would also be a feat to eliminate all sight-based penalties ever. What about a version of expertise that can increase your AC to 25 + level and allows you to expend mythic power to have attacks miss you when using expertise. What about combat reflexes that kick in whenever a target is in your threatened area, even if the target already was there? Yeah, these feats fundamentally change some of the dynamics of how the game works, but they also make for exceedingly cool options versus players who think they’ve seen it all and get cocky or, on the player’s end, for truly high-level game. Yes, immunity to all missiles that qualify for deflect arrow may be powerful; as may be additional actions if your initiative is really high (a nod to systems like Shadowrun or LRGG’s Necropunk’s phase combat) – but know what these have in common? Yeah, they’re not instant-win buttons. Heck, a minor sorc-gestalting feat is actually less OP than the regular getsalt-feat and the massively reach-extending mythic lunge-feat is insane, yes, but unfortunately I’ve seen more broken takes on that one intended for vanilla PFRPG…so yeah, wouldn’t want that in a standard level game, but high-powered mythic? Well worth teh consideration, even if you don’t skim on the edge of power.

What about becoming “Uber-Mythic” (though that’s supposed to be the Ü-Umlaut, damn it…), treating mythic creatures as non-mythic? Yeah, lot of fun to be had here… What also made me smile was the take on weapon finesse – add str, dex and int all to atk and damage rolls. Why? Because I often complain about multiple attributes being added to the same roll more often than not meaning that the design is wonky or flawed…but that may just be the jaded reviewer in me.

Now beyond these horrifically overpowered mythic feats, there also are mythic horrifically overpowered feats, the latter being essentially mythic versions of the respective horrifically overpowered feats. What about e.g. powering the by now infamous “Denied!”-feat with mythic power in addition to daily uses? Yeah, Ouch. This may be a subjective impression, but if you were thinking after the first chapter, that there’s still wiggle-room upwards, these feats go there. Use mythic power as, literally regrowing resources for extra lives? Check. Penalty-less full casting action? Check. Mythic tier +1/2 level for gestalting? Check. What about the feat that literally makes you the first to act, always, existing only once per setting and requiring the former owner to die to learn it? Check. Mythic tier to all mental or physical attributes? Check. It should be noted that these feats can be considered a kind-of-appendix, since they do not offer the non-mythic feats they’re based on and thus require the previous non-mythic book, so that’s something to bear in mind if you want to make maximum use of the second chapter as well. But lists of feats come with handy tables of the feats and what they do – nice.

Editing and formatting are top-notch, I didn’t notice any significant glitches. Layout adheres to Rogue Genius Games’ easy-to-read two-column standard and the pdf sports neat stock-art. The pdf comes fully bookmarked and unobtrusively hyperlinked for your convenience, with the latter ones I tried always working as intended.

“OMG, deez feats are s000 imba1111!!!! Can 1 uz dem???” and “These are what’s wrong with the game! Back in the day, we rolled a d1 and subtracted 10 to hit a Goblin and only did so on a zero!” are both wrong ways to approach this book, so let’s be mature and flat-out state this – these feats are designed for very specific circumstances and groups and do not pretend to be balanced. The book flat out tells it like it is and points toward an art that seems to be the source of many a table’s problem – player entitlement and DM stubbornness/campaign Mary-Sueing. So if your players think they have a right to use such feats…don’t use them. If as a DM, your world is so precious to you that you want to run your PCs and force your vision on how a world’s narrative is supposed to run on them…don’t even think about it. These feats and their power-curve require dialogue, an ability to maturely discuss them and decide which ones to use and which ones to ignore. They are NOT balanced with the core game or even mythic rules (though, mythic rules honestly lose any semblance of balance at the higher tiers anyway…) and thus require a mature table. Got that? Great, for if you do, then this will quite probably rock your world. Let me elaborate.

Owen K.C. Stephens delivers a bunch of feats that scrape the top of power-levels – and yes, they are extremely powerful, some even horrifically so. But know what they also are? Are great toolkit to stump the “seen-it-all”, an array of options for truly apex-powered campaigns that border on the ludicrous. These feats, especially the mythic versions of already horrifically overpowered feats, are insanely powerful and let the players (or adversaries) wilder in the power-realms usually reserved for demi-gods, full-blown deities and similar beasts – and as such, they do actually offer a superb addition to a DM’s toolkit to fluster these exceedingly powerful level 20+/MR 10-characters, to provide something truly awe-inspiring (or downright mean). Just bear in mind – each of these feats can significantly alter the power-curve and is at least up to a CR +1 template. If you bear that in mind and take heed, then this is a great offering indeed, providing some of the nastiest tricks for infinity and beyond gaming I’ve seen in a while – well worth 5 stars + seal of approval.

You can get this cool book of insanely powerful options here on OBS and here on d20pfsrd.com’s shop.