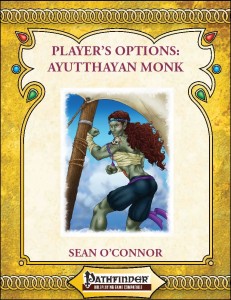 This installment of the player’s option-series introduces us to a variant monk class, the Ayutthayan Monk and clocks in at 13 pages, 1 page front cover, 1 page credits -leaving 11 page of content. Yeah, my pdf weirdly has no SRD.

The Ayutthayan Monk gets d8, 4+Int skills per level, a completely custom list of weapon proficiencies, AC/CMD-bonus of +1 (scaling up to +5) when unarmed/unencumbered and even remaining when flat-footed and touch attacks. They have all good saves, 3/4 BAB-progression, scale bonus movement rate to up to 60 ft, increase unarmed damage to up to 2d10. ALl in all, quite similar to the regular monk, so where are the differences? Well, at 1st level, the monk gets a bonus feat called Wai Khru Ram Muay, a dance that can generate ki, but only temporarily – i.e. the ki is short-lived and dissipates after 1 minute. Still, this means up to 10 (!!!) points of ki that can freely be burned away. This is a problem. Ki is a non-exclusive, non-regenerating resource that plenty a class/book utilizes for various means and taking away the restriction and making ki so easily available can break the game fast and hard, even without digging too deep in your pdf collection…

Let’s continue: At 2nd level and every two levels thereafter, the Ayutthayan Monk gains another Dhoi Muay-feat though the choice is slightly influenced by the levels – low-level monks have less choices. They also get their ki-pool at first level, evasion at the second – sooner ki pool, but no other downsides. The class also gets a weapon-themed bonus feat at 3rd level and every 4 levels thereafter. The class also gets body hardening-feats from the tree provided herein as well – these make use of the rules from the “Strategists & Tacticians”-book. The thing here is – not all people use this book or even own it and while I *like* the support of the rules, some alternate benefits would have helped, especially since the abilities are ingrained in the class. If you were always interested in the bone breaking maneuver as presented in Strategists & Tacticians – this pdf has all the necessary information and thus has rather cool supplemental crunch here.

At level 7, 12 and 20 the Ayuvatthan Monk may choose one of 9 sacred tattoos. These work as major bonuses, with bonuses to attributes, saves, unarmed damage and skills etc. being among the benefits. They also have slots (can’t have two tattoos in the same slot) and generally, are cool ideas. Problematic, though – a continuous protection from evil-granting tattoo lacks e.g. an effective CL of the effect/info on when/how to reactivate it after it’s been dispelled. It should also be noted that this version of the monk does not get purity of body, diamond soul, etc. The pdf also provides quite an array of new feats inspired by Thai boxing, if the nomenclature so far has not been ample clue.

Generally, let me step out for a second and say – YEAH. Thai boxing is damn hardcore and since my first girl-friend came from that cultural background, her brother actually taught me the basics. Getting even the basics right means you’ll hurt. A LOT. The feats per se, in concept, live up quite well to what they aim to achieve in reproducing the hardcore power of these fighting styles. On the downside, their wording is sometimes less than optimal: “With a successful unarmed attack as a standard action, you may use an attack of opportunity against the same opponent, making a single unarmed attack at BAB -5” – does this mean the ability to execute the AoO automatically kicks in whenever one does just an attack as a standard action (as opposed to a charge/ full attack) or does it mean it only works when you initiate the attack explicitly as a standard action with the intention of doing the trick? The feat then allows the foe a save vs. DC 10 +1/2 class level + str-mod or be 1d4 rounds stunned. The feat also mentions “Costs 2 ki points.” What does that mean? The AoO? the stunning effect? When do you have to expend the ki points to activate this? And yes, the sequence matters. Which is generally a pity, for the feats, which often use AoOs as a kind of resource to add to combat maneuvers generally can be considered distinct and flavorful. Also interesting – a feat that allows you to make a ref-save versus an attack roll to mitigate the attack while fighting defensively and follow that up as an immediate action with a trip attempt that also deals 1d3 damage and knocks the foe prone. The question being: Why not unarmed damage? Is str-mod added? AoOs and the like have been taken into account there. Also mechanically a bit wonky would be horse kick – as a full-round action, make an acrobatics-check versus opponent’s initiative – on a success, attack at BAB-5 for double damage. All right – Acrobatics vs. Ini? Makes mathematically not much sense, the discrepancy is vast. Then BAB at -5 for double damage? Not that enticing. I like the base concept of the feat and think it can be salvaged, but as written, it’s too weak, especially since it and just about all these feats also cost ki.

I’ve danced around the issue here – (see what I did there?) – the concept per se is cool, the wording sloppy. A simple example “You gain a +3 competence bonus to initiate or

maintain a grapple.” So, does that mean I get both bonuses? Do I lose the initiative bonus upon maintaining a grapple? Can I opt out of the grapple bonus to maintain the initiative bonus? It’s a simple line and one that can be found in plenty a feat, but here both author and editors obviously have slept – I’m used to better quality control by 4WFG/PDG. Now not all feats suffer from such glitches, but enough do to be a problem.

Editing on a formal level is good, on a rules-syntax level…not so much. Formatting is fine. Layout adheres to PDG’s printer-friendly two-column standard and the pdf has no artwork apart from the cover. The pdf comes fully bookmarked for your convenience.

Damn. Concept-wise, this is by far the favorite base-class by Sean O’ Connor I’ve had the chance to review – I love the idea behind this variant monk, I love the slight power-increase…but I can’t deny the issues. The regenerating ki is a HUGE no-go and the overall pdf suffers massively from sloppy, convoluted wordings. The complex feats often get it *almost* right – it’s evident that something extraordinary, experimental and cool has been tried here and you can *see* what to be excited about in this one. Then you start reading and ambiguities galore creep up. From suboptimal wordings to downright confusing ones, weird rules/balance-decisions… It almost looks like there was this great concept and all base concepts done…and then, interest was lost by those involved and the final implementation of the concepts rushed out. This one has the full potential of 5 stars + seal of approval when fixed in all regards by a talented rules developer. Once the too strong/too weak feats have been brought in line, the unnecessary and excessive ki-costs streamlined, the wordings cleaned up – then this is an actually damn cool book. As much as I love so much in here, I can’t rate its potential, I have to rate what’s here – and what’s here is unfortunately very flawed. This would potentially score even lower, but the fine potential does not warrant that – hence, my final verdict will clock in at 2 stars.

You can get this class (SUPERB for inspiration/scavenging ideas) here on OBS and here on d20pfsrd.com’s shop.