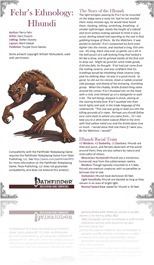 The second installment of Fehr’s Ethnologies from Purple Duck Games is 8 pages long, 1/2 page artwork/editorial, 1 page SRD and 1 page advertisement, leaving about 5 1/2 pages of content for the Hhundi, so let’s check them out!

First, something to note: If you play with Germans or any speakers of German, you’ll have to rename these. “Hundi” is roughly the equivalent to (cute) “doggy” and my players would have burst from laughter. Oh well, onwards to the new race!

Hhundi are crouched monstrous humanoids, get +2 to Dex and Wis, -2 to Cha, darkvision, light sensitivity, scent, natural claw attacks for 1d4, the ability to cast reduce person on themselves and a natural armour bonus of +1.

The Hhundi are a race of stalkers and hunter, not entirely benevolent, but neither bestail, just…welll…somewhat alien. They lay eggs, have some interesting social protocols. The ecology-section per se is well-written. The Hhundi get 4 race traits that don’t feel overpowered and specific enough to make the race flavourful. & alternate racial traits are also part of the deal and range from less penalties when using stealth while moving fast, to negating scent (via a new spell aslo included in the pdf) and I liked most of them – one, though, is severely over-powered: Wary defender replaces scent and lets you roll each perception-check twice, taking the better result. That’s stronger than most FEATS, let alone traits! Not gonna happen!

Speaking of feats: The 4 new ones herein are neat, one in particular, which enables the hhundi to temporarily become small, is neat indeed. The pdf also covers how the race views classes and features favoured class alternatives for 8 different classes.

The sample Hhundi is actually…a gunslinger! Yes, you heard right! Hhundi love the black powder and a masterwork backpack as well as the crude Hhundi silencer are included with their stats – cool supplemental material and the seeming contradiction in the race and the fondness for technology makes them more interesting.

editing and formatting are top-notch, I didn’t notice any significant glitches. Layout adheres to PDG’s rather printer-friendly 2-column standard and comes with full bookmarks. The artwork of the Hhundi is nice. Apart from the stupid name, I did actually enjoy the race quite a bit – the Hhundi are not easily pinned down into a stereotype and offer a wide array of roleplaying possibilities without dissolving into featurelessness. Rules-wise, they are also rather solid and, with the notable exceptions mentioned above, neither too powerful, nor too weak. On the other hand, said rules are there and feel a bit off and quite frankly, I would have loved to see a bit more on the products they create, as goods say a lot about a culture. The race unfortunately lacks an age, height and weight table. The low price is a plus, but as written; I can’t go higher than 3 stars on this one – check it out if the idea of some strange stalking race intrigues you!

Fehr’s Ethnology: Hhundi is available from: