So What’s For Sale, Anyway? IV 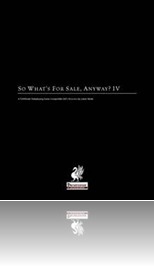 The fourth installment of the “Swfsa”-line from Raging Swan Press is 23 pages long, 1 page front cover, 2 pages editorial, 1 page ToC/foreword, 1 page advertisement, 1 page SRD and 1 page back cover, leaving 16 pages of content, so let’s check this one out!

Whereas the third in the series presented stuff for sale in dwarven communities, this one is focused on elven settlements. It should be noted that each type of village comes with a “spellcaster for hire”-entry that notices the highest level of spell available. Among the items to be purchased are a total of 48 cursed items and it is here that a distinction from the former installment can be seen – the curses no longer do only “standard” things, but include e.g. hair changing colour permanently, growth and shrinking etc. Seeing how scarce space for these curses is, I applaud author Julian Neale for the effort.

We also get sample towns, 2 from thorps up to small towns and 1 per larger settlement. In total, we get 25 lists for thorps, 22 for hamlets, 15 for villages, 12 for small towns, 9 for large towns and small cities respectively, 7 for large cities and then we thankfully get 8 sample lists for communities of metropolis-size.

Editing and formatting are very good, I only noticed an awkward wording in one of the sample towns. Layout adheres to RSP’s tried and true, elegant two-column b/w-standard and the pdf comes with a version optimized for the screen as well as one for printing. The pdf is fully bookmarked. In contrast to the last installment, this one felt a bit more brave and unique in its curses and the sample towns rock. However, I still can’t help but feel a certain fatigue of reading through these – where e.g. “So what’s that hoard like, anyway” provided strange and uncommon treasures and “So what’s that shiny thing, anyway” was downright brilliant, this one is more conservative. You won’t find any enchanted garter-belts or the like in these lists, which mostly contain rather conservative magic items. Don’t get me wrong, the lists are great and the focus on elven items is nice, I just wished that the pdf would go a step beyond, introduce a new weapons class, a new item, something more out of the magic “ordinary”. If you e.g. took an Iron flask and reskin it as a flute, you could still write “flute xyz (works like the Iron flask)”. But perhaps that’s only me. The pdf per se does what it sets out to do and I don’t really have anything to hold against it and in fact enjoyed the curses of this one more than those of the predecessors. Thus, I’ll settle for a final verdict of 5 stars.

So What’s For Sale, Anyway? IV is available from: