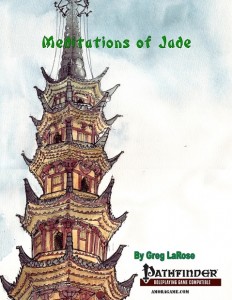 The second pdf containing meditation feats clocks in at 6 pages, 1 page front cover, 1 page editorial, 1.5 pages of SRD, leaving us with 2.5 pages of content, so let’s take a look!

We begin this pdf as the last installment, with a recap/reprint of the base meditation feats the feats herein are based on – the pdf thus is pretty considerate and user-friendly. The feats herein are grouped in two general fluff-classes: Yin and Yang. Unless otherwise noted, the benefits only apply when under the effects of a meditation. Let’s begin with the Yang-feats.

-Enter the Zone: Roll crit damage twice and take the better result, does not extend to sneak attack et al. Nice one.

-Flow Like Water: Switch between starting stances and style feats as a swift action at any point. Interesting one that dives into the grit of the rules.

-Mind’s Eyesight: Meditate as a full-round action to gain character level rounds the ability to see auras and, with time and practice (odd wording choice) can use thus aura sight and detect magic as SPs. The wording of the last sentence here is a bit redundant and wonky.

-Regurgitate Poison: Ingest poison, delay its onset and spit it at a target within 15ft via a ranged touch attack. I assume that this renders ingested/injury-based poisons contact poisons for the purpose of the spit attack; though the wording is pretty precise, specifying that would have made it better still.

-Self-Reflection: 50% to determine weal or woe, with longer meditation increasing chance of successful outcome by 5% per minute. Solid, but I wouldn’t spend a feat on this.

-Tummo: Ignore temperatures of up to -50° F sans having to make Fort-saves; also, meditating generates heat and may melt snow around you, drying you and your belongings. Really like this one!

The Yin-group sports 2 feats:
-Dim Step: Dimension Door between dim lights of up to your base speed. Per se cool, but odd: The spell requires a standard action to cast, while the feat does not have an activation action. The line stating the possibility of multiple jumps implies that you can jump multiple times. I assume that the jumps can be made as part of a movement, but I am not sure – a slight clarification for this per se great feat would be appreciated.

-Shadow Reflection: This one is awesome: You create an illusory double and determine a course for it – the double runs from you, following your preset course. For one ki, you can reactivate this distraction-granting feat after the initial activation. Damn cool, but it should imho specify the illusion subtype (pattern, figment?) and the initial meditation is pretty long – 1 minute, meaning that you’ll mainly use this feat via ki.

Editing and formatting are pretty good – while the rules-language does sport some minor rough edges, over all, you get the intent of the feats herein. Layout adheres to a printer-friendly two-column standard and the pdf comes sans bookmarks, but needs none at this length.

Greg LaRose’s second array of meditation feats is better than the first one: While there still are minor deviations from rules-language here and there and while some feats could use a bit of clarifications, this mops the floor with its predecessor mainly due to the fact that the benefits granted herein feel more versatile, more visually interesting and ultimately, more unique. The pdf also sports less potential problem-sources than the previous pdf.

Generally, I liked this little, inexpensive pdf and considering the difficulty of the base material and concepts attempted, this does get a bit of leeway. Hence, my final verdict will clock in at 3.5 stars, though I’ll round up this time around. For the low asking price, this is worth checking out if you like the concepts.

You can get this nice, inexpensive pdf here on OBS!
Endzeitgeist out.