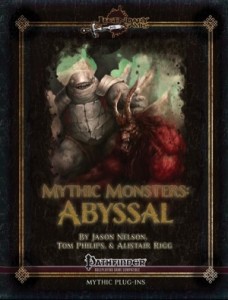 This installment of Legendary Games’ Mythic Monster series clocks in at a massive 40 pages, 1 page front cover, 1 page editorial, 1 page ToC, 1 page SRD, 2 pages introduction to the product line, 1 page advertisement and 1 page back cover, leaving us with 32 pages of content, so let’s take a look!

After a short introduction to the matter at hand, we are introduced to an extremely cool introductory text that serves as a frame narrative – essentially a lecture on a newly discovered species of qlippoth, before we are introduced to options available for those who want to conjure forth these antediluvian threats of evil – including a new way with the so-called qlippoth talismans (in case the sacrifice of pregnant women is not an option for your vile villain…) – no less of 10 such talismans are provided and they essentially make calling these dread beings via summon-spells possible. Neat!

After this cool supplemental material, we kick off with the respective creatures – Baregara get a mythic version of CR 15/MR 6 that has truly devastating grapples (including a maw that consumes targets, automatically dealing damage on grapples, which they can maintain one-armed, and also providing AoE-demoralizing. Essentially, all basic abilities have been upgraded to be more lethal – nice.

Second would be the CR 13/MR 5 mythic bebilith, and these foes are even better at dismantling foes armor (including natural armor) and their rotting bite is truly devastating. At CR 23/MR 1o, shaggy demodands are terrifying forces indeed – blocking any channeling in the vicinity (unless the target succeeds a very difficult save), these are mythic monsters at their best, taking a relatively bland base creature and slapping a vast array of signature abilities on the creature – towards a more concise monster concept, that one being the anathema to divine casters. Two thumbs up and kudos for improving the base creature like this.

The Mythic Slimy Demodand at CR 20/MR 8 can add stun as insult to injury (when foes bleed and take acid damage…) and even highjack channeling and temporarily sever divine casters from their powers – better yet, said duration can be further expanded with the aptly-named “Where is your god now?” – glorious and once again a HUGE improvement over the relatively bland base creature. AT CR 16/MR 6, the Tarry Demodand is slightly less awesome, but continues the theme of anti-divine outsiders, but their sense of faith and entangling tar-like secretions make them powerful hunters – including an anti-divine smite.

Need something at lower levels? CR 4/MR 1 mythic howlers have quills that drive those embedded with their quills insane and furthermore, heal via drained sanity. Evil! TA CR 18/MR 7, the Kauen-Taka can ROT THE EYES OF THSOE THAT SEE THEM. That’s damn creepy even before their carrionstorms get mythic templates added… As a minor complaint – the mini-statblock for flesh-mansion-less Kakuen-Taka could have used a better formatting/some highlighting. But then again – mere presence induces hallucinations? Animating flesh piles and withering plants? This one is disturbing indeed! And while the base creature was awesome, unleashing eyeless hounds and killing foes at short range via ethereal hails of soul splinters round out an epic creature indeed.

Speaking of which – AT CR 15/MR 6, the Chernobue Qlippoth may be a cool upgrade, but in direct comparison to the former critter, it falls a bit flat. Then again, cythnigots-spawning poison is cool – that might be the Qlippoth-fanboy speaking… Speaking of which – these clock in at CR 3/ MR 1 and their spore-infested wounds can entangle, even entrap targets! Cool and rather lethal low-level mythic threat that works well in that context. The Nyogoth (At CR 13/ MR 5) can attach itself to targets via its intestinal limb bite attacks and upgrades the acid spray with poison – neat!

AT CR 9/MR 3, the mythic shoggti no longer just clouds the minds of foes – it can now utterly dominate them and even stun those subjected to its wis-draining powers. OUCH! Have I mentioned that breaking targets free of the control may see them attack you in a murderous rampage? Yeah – nasty, indeed! The CR 19/MR 7 mythic Xacarba learn to mix their poisons (Yes!) and even spray them over an area – neat improvements of the base creature!

Finally, at CR 16/ MR 6 we get the Mythic Ylyrgoi – huge, hydra-like, multi-stingered monsters studded with countless shrieking maws and eyes. This creature is brand-new and oh boy – an aura that reduces gestation periods of infections, parasites and diseases, improved demon killing, stingers that regenerate, insane reach, egg-implants – utterly disturbing and oh so awesome – its signature abilities taking up more than 1 full page – that does not count the statblock! Add to that the extremely awesome artwork and we have a truly glorious beast here!

Editing and formatting are top-notch, I did not notice any glaring glitches. Layout adheres to Legendary Games nice 2-column full-color standard and the two pieces of original artwork by Ivan Dixon are awesome indeed, with the new creature’s artwork taking up a whole page so you can show it to your players. Now, layout-wise, like Mythic Monsters before, this one has some blank space at the end of one monster’s entry, which is nice if you just want to print out one, but also means that printing this out is slightly more wasteful on the paper than it could be. It’s a matter of preference whether you prefer this or a more “cluttered” approach, so that won’t feature in my final verdict. Now what does feature in it would be the glaring lack of bookmarks, which renders navigation more difficult than it ought to be.

Jason Nelson, Tom Phillips and Alistair Rigg provide a glorious collection of uncommon abyssal foes – and deliver in spades. You know, mythic can be often taken as a bland “faster, harder, wider”-contest and yes, some creatures can be seen as a relatively straight progression. The vast majority of abyssal threats in here, though, is not content with such a treatment, instead developing the base creature, often into something truly distinct that works so much better than the base beast – with signature abilities emphasizing niches and foci of the monsters herein, there is not one critter in here that has not been massively improved, with the abilities of demodands and their thus much tighter focus making them my favorites in here and, perhaps for the first time in ages, actually DISTINCT. The new qlippoth is one glorious beast as well, and were it not for the lack of bookmarks, this would be immediately 5 stars + seal of approval. Their lack means I’ll refrain from putting my seal on this, but still consider this one superb purchase that any DM who thinks the players should FEAR the denizens of the abyss should get – even if only to scavenge signature abilities…of which there are soooo many…

You can get these terrors from the abyss here on OBS and here on d20pfsrd.com’s shop!