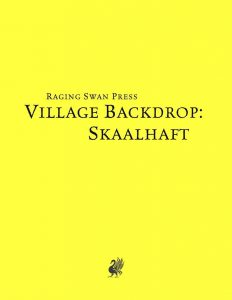 Strangers come to this place to purchase all kinds of strange ingredients for alchemical and arcane practices, some of which are less than wholesome. PCs that do their leg-work can unearth some lore about the village and there even is a wayhouse, where two of the wealthiest patrons of the settlement can be found – these, alongside 3 other NPCs, come with an expanded NPC-write-up: Sans stats, but with mannerisms, distinguishing features, etc. And yes, there is a proper market place section of items to procure, adapted for the more conservative old-school playstyle. It should be noted that the wizard-class is referenced once, not magic-user – while most folks won’t care here, some of the more diehard traditionalists may.

Jeff Gomez’ Skaalhaft is a thoroughly inspiring little settlement: Its unique premise is employed in a rather evocative manner and makes sense – in a world where fantastic creatures abound, it is bound to be a matter of time before the humanoid races find a way to standardize and specialize in their hunt and consumption. Skaalhaft, as such, is a window into an all-too-often neglected component of fantasy games and adds serious depth to the game. While, to my knowledge, there is no OSR-book focusing on the use of the remains of creatures for added synergy, this still remains a great installment of the series, well worth its place in the exalted array of settlements the series provided. In short: This is a great, inspiring little pdf, well worth 5 stars.