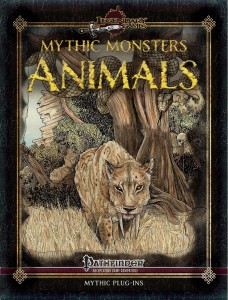 The tradition of this series stipulates that we begin each of the supplements with a fun, customized offering that takes the respective nature of the installment into account – this time around, this would be a mixed entry regarding its focus, one that takes a crucial central component into account: Animals are hard to do justice in mythic rules. Sure, you can slap those supernatural abilities on them, but then you’ll lose a kind of the quasi-realistic feeling of mythic animals – they captivate as a concept due to 2 factors: 1) We *know* animals – whether consciously or not, we are familiar with their evolution-powered biology, the function of their bodies and overall design. 2) At the same time, mythic is all about amplifying all up to 11. A recommended means of representing this conundrum would be by assuming a mythic animal to be an extraordinary creature of its kind, a paragon if you will. The optional, additional King of Beasts quality represents this, making the respective animal prouder, wilder, fiercer and harder to domesticate. Personally, I very much like this option and applaud its integration.

Beyond this component, obviously the factor of domestication must be taken into account and so the synergy with the installment on mounts, the Handle Animal skill (via new exploits) and the Ride-skill is provided. After this rather imaginative section, we dive right into the creatures, the first of which would be the axe beak at CR 3/MR 1 – in the mythic version, this book adds more powerful bites, better leaps and allows for more flexible, sudden charges. At the same CR/MR, the bat swarm and dire bat await – the former getting a powerful blood frenzy to tear bleeding foes to shreds, the latter gaining temporary hit points, potentially powered further by mythic power – both have in common that they deepen the theme of the creatures and that they maintain the concept of the animals – they remain believable.

The mythic dire bar at CR 8/MR 3 is definitely something if you and your players have recently seen one of these over-dramatized grizzly-scare horror/survival-flicks: With mythic power’d quarry and immunity to debilitating save-or-suck abilities, these bears are truly astounding foes – and the gorgeous artwork provided walks the line between dangerous and cuddly -fine job! The CR 5/MR 2 dire boar’s bleed-causing crits and back-to-the-wall-bonus is more straight in its design, but still fits. Again, at CR 3/MR 1, the cheetah gets an awesome modification f the sprint – which may now also blur the creature – and if you picture the cat sprinting in the heat of the steppe, you can actually see that kind of being realistic in a world tuned up to 11 – they are VERY fast.

The dire crocodile at CR 11/MR 4 is mechanically extremely interesting – they can AoE-bite foes and have a particularly noxious bile – I love this build! Kudos to whoever made the creature! The CR 4/MR 1 petranodon gets stealthy flying – nice, I guess, but falls a bit short when compared to the former animals. The CR 2/MR 1 giant poisonous frog gets reflexive poison skin – solid.

At CR 6/MR, the dire lion, as the king of cats, can grant teamwork feats to other felines and wildcard-change teamwork feats via mythic power – add a deafening roar with a cool-down and better paws and we have one awesome build.

The lowest of the low, the mythic dire rat at CR 1/MR 1, becomes a particularly lethal plague bearer – you could craft a cool roleplaying heavy scenario focused on containing potentially infected creatures after dealing with this foe – two thumbs up! At 2 CR more, the rat swarm gets a nasty fear-inducing ability. At CR 4/MR 1, the murder of crows can quickly disperse and expand, combining two of my favorite rules for mythic swarms, both of which fit the visuals of this one perfectly. Oh, and they can take your eyes. Two thumbs up, also for the AWESOME artwork provided! On the nitpicky side, the source of d20pfsrd.com may or may not be a slight glitch. It does not impede functionality of the statblock, though

At CR 5/MR 2 the rhinoceros’s statblock seems to have a slight layout hiccup – the statblocks organization is all correct, but the formatting that separates the sections has not been properly implemented. On the plus-side, a sufficiently deadly charge and the option to be armored further render the creature rather awesome. Its woolly brethren at +2 CR/+1 MR may instead impale foes, gets resistance to cold and the option to deal sonic damage via their stomps – awesome.

At CR 11/MR 4, the megalodon, receives immunity to mind-affecting effects, representing the single-minded predator. The creature may also rip open the skin of swimmers by just passing them by and accelerate to ramming speed for lethal slams – love this build and the full color art provided helps!

Next up would be snakes – CR 6/MR 3 for the emperor cobra is so fast, it may retreat to the shadows and thus negate deadly hits. With a warning growl and more lethal poison, I thoroughly enjoyed this one. At CR 13/MR, the colossal anaconda – these creatures may draw you under via their very wake, encircle foes and squeeze the air from foes – nice one, though the encircling ability has a its name not properly bolded. Per default, the creature’s build has the giant templates, but stats sans it are provided alongside the Inescapable Grasp-feat’s reprint. At CR 5/MR 2, the snake swarm wins by virtue of the sheer amount of toxin pumped into its foes – nice.

The mythic dire tiger at CR 10/MR 4 (represented alongside the snakes on the gorgeous cover, which features herein as a 1-page spread) is a consummately deadly hunter with hide in plain sight, soundless charges and the option to severely injure limbs – cool build, though one ability has a formatting glitch, where, instead of a minus, there’s a crossed-out box as a remnant. This does not cripple the entry or render this problematic, but it does show. The CR 4/MR 1 wolf, as pack leader, may grant Pack Attack and combo maneuvers with the bite – which is cool. Cooler even would be the CR 6/MR 2 wolf pack – utilizing the troop-type, fear-induction, hamstringing foes and extra options to represent their relentless chase makes this a great build.

The final creature herein would be the mythic version of the wolverine who not only gets rage, but also a nasty cone of nauseating musk at CR 5/MR 2 – again, a cool build with a great artwork.

Editing and formatting are good, though not as tight as most installments n the series – there are quite a few small hiccups in formatting etc. herein, though none of them impede functionality. Layout adheres to LG’s two-column full-color standard. One should not be remiss and mention the excessive amount of new, full-color artwork provided for most creatures herein. The pdf comes fully bookmarked for your convenience.

Mike Welham, Victoria Jaczko, Jason Nelson, Jonathan H. Keith – ladies and gentlemen, you have made what must have, design-wise, been one the hardest mythic monster-books actually one of my favorites: The lingering requirement of a quasi-realism is maintained in all builds, while still sporting a sense of the wondrous. Add to that the fact that quite a few builds sparkle with creativity, going wildly different routes in design, and we get an excellent installment of the series. That being said, the glitches make it impossible for me to rate this the full 5 stars, in spite of me absolutely adoring this pdf’s content. My final verdict will hence clock in at 4.5 stars, rounded down to 4 – but I will still award this one my seal of approval – I loved this pdf that much!

You can get this cool installment here on OBS and here on d20pfsrd.com’s shop!