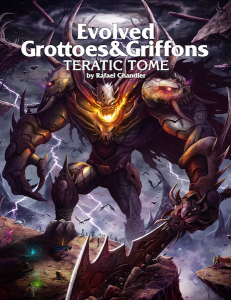 The pdf of this massive book clocks in at 118 pages, 2 pages of editorial, 1 alphabetical list of monsters, 2 pages of art-credit, 1 page author bio, 2 pages of SRD, leaving us with a massive 110 pages of content. My review is mostly based on the hardcover print version, but more on that in the conclusion.

First a word of warning: This is a tome of MONSTERS in the literal sense of the word; the creatures herein are not for the faint of heart and the target demographic of this book would obviously be adults. The artworks does contain gruesome nightmare fuel, the text mentions explicit and gory details and the pdf does feature nudity. So if any of those disqualify this book for you, well, you have been warned. If you have triggers, I’d also strongly suggest skipping this one.

All right, only people left that can take the look into the abyss? Great. Remember, you have been warned.

We begin this book with one page of explanatory notes regarding monster presentation – treasure tables, movement rates and a THAC0 (here called TAZ – target Armor Zero) should provide no issues. We have, obviously, descending AC here. The page also explains how to roll d10000, for example. In short – in all brevity, it makes reading the entries easy.

So, what exactly is this? The easiest way to picture this book would be as a dark fantasy/horror monster manual. Have you ever bemoaned that there is no LotFP-MM? Do you need creatures for a twisted dark fantasy game? Look no further. I am so not kidding you, but be warned – this is not for the faint of heart!

The monsters herein could be categorized in various ways, the first of which would be “twisted takes on classic creatures” – take halflings. They are thoroughly vile creatures that worship Elizabeth Lack-Heart as their patron goddess. They also arrange their settlements in a way that tries to spell, on a civilization-level, the name of their goddess…and all good deities beware if they succeed. Instead of providing whole classes of dragon, the book provides 10 venerable dragons, all of which are unique beings with their own powers, tricks and background story and range from over 10 K XP-values to a massive over 50K XP moloch, namely Uchorah-Thanaphor, atrous dragon. The arrival of this harbinger of doom is preceded by strange shifts in weather, unexpected outbursts of violence and suicides and worse…

How can you make gelatinous cubes, as a concept, weirder? Well, the pyramidal version herein sports translucent, blue eyes. Lesion ghouls would be charred corpses, coated in a layer of carnivorous insects. Obsidian golems are actually magical mechas, fused with elven warriors that can never escape their horrid prison- absolutely insane, elven pilots with even more bloodlust than their xenophobic brethren, mind you. Aquatic gnolls actually are lawful creatures with terrible, lamprey-like, ringed mouths.

What’s the worst you can think of as an origin myth for beholder-like entities? Well, there would be the audiences as a monster class: Lumps of flesh, stitched together by the halflings of the tenebrous crypt, to act as collective vessels for the mad necromancers. “Then, Shauva Tiridan, the mad mage, took their eyes” – and created another creature, basically eye-spiders. Clever way to get past any possible copyright issues…and the audiences are disturbing indeed, featuring, for example, a lump of swollen, buboes-covered mass with a central maw and 5 perpendicular tentacles ending in moray-like snapping jaws.

You will have noticed at this point that the book makes excellent use of the space it has due to the relative brevity of OSR-stats, providing detailed, often inspiring and pretty dark angles to use the particular monsters, more than one of which has a serial killer style modus operandi to slay and choose its victims. Partially, these are explained in the way the creature was made, for there are quite a lot of unique adversaries herein – like the Tutor, who abducts people in love and tries to force them to kill one another…and even winning in this horrible game will not prove solace. Told you. Allcaps monsters. The grossly mutated and unstable Pearl Riverbend, with grotesque spitting serpent appendages and oversized hands may be considered to be tragic, while e.g. the Cruhardac, a being that abducts groups of people to create art from the viscera and leave the last one alive would be many things, but tragic is not one of them.

As you may have noticed, many of these beings basically have an adventure’s seeds already included in their presentation. Another leitmotif would be disgusting creatures conjured forth to hunt down those that have sinned in some way: Whether versus a deity, by being unfaithful, etc. – chances are that some agent of retribution (read: Sadistic overkill levels of vengeance) can be found within these pages. More than one of these creatures is btw. not above inciting such events themselves, ensuring that they always have a sufficient amount of sinners to punish…

Speaking of retribution – the three kritarchs, dread servants of the goddess Nemesis (play the Arch Enemy song as boss theme), also get full stats here. Horrid amalgamations of flesh and steel like the Magistrate speak of the fall of mythic Mecha-Zel; several of the creatures within this book hint at legends and places you can easily discard…or develop further. The same goes for more than one of the legendary adversaries herein: Like Malchior, the thief that stole death’s secrets – who is now looking for an anointed successor. Or Baskra, who seeks to goad powerful mortals into foolish decisions that cause untold misery by the use of his dream-implantation powers and his masterful wielding of most people’s fear of death.

How would you picture the dread Chimæra queen? “[She] has the torso of a humanoid female. From between her shoulders juts a cluster of green tentacles ending in 3 black claws. Her arms are long, and her body is covered in pale, green thorns. Between her legs, there’s a pale blue tentacle, from which grow several smaller tentacles. This main tentacle ends in her head, which is topped by white tentacles that writhe around her face. The Queen’s tongue is long and grey and dry, ending in a wad of tissue tipped with spikes. Her legs are pale blue with dark brown spots, each ending in three spikes.” The amazing thing is that the artwork manages to portray this monstrosity as a plausible, utterly alien and frightening THING. Though the angle presented for her is even cooler: You see, she is basically interested in forcing evolution’s hand…and she likes the thrill of hunting armed prey.

There also would be demons and devils, particularly of the unique-and-very-powerful variety…or an insane, old hag that likes stitching her victims to her patchwork flesh…and her colorful house and giant stuffed animals in the yard make pretty clear who the intended victims of the seamstress are, right? Have I mentioned that these are MONSTERS? That this book is DARK?

Even ole’ Pantagruel is not the gentle giant you remember. He has sailed the oceans and now he’s back. Good news: When you lay eyes upon him and have less than 2 HD, you’re dead. Bad news: The giant is utterly insane and on a killing spree of kindness: What he has seen beyond the seas has convinced him that all creation, every living thing, should get a mercy-killing post-haste…to avoid the horrors to come. He’s btw. the titan on the full-color cover image, as far as I could tell.

Editing and formatting are impressively well-done, I noticed no grievous glitches. Layout adheres to a no-frills two-column b/w-standard that is pretty printer-friendly. Now, if you like dark artworks, then this will have you smile from ear to ear – each and every monstrosity herein comes with an impressive piece of b/w-artwork depicting the creature, the vast majority of which obviously are originals made for this book. The pdf version comes with excessive, nestled bookmarks.

Again, if you have a trigger, if you have issues with depictions of really dark and gory material, then this is not for you. This is pretty much a black metal -level dark bestiary full of thoroughly vile, despicable, dastardly things that literally not even the most righteous paladin would blink an eye at killing. Thought the BoVD’s critters were bad? Pfff. Believe me, they are really tame in comparison.

If you’re looking for nice creatures for a family-friendly game, this is not for you. This is the antithesis of that and you won’t be happy with it.

What I’m trying to say is that this book has a very specific target demographic and those that do not fall into this demographic will probably be shocked, disgusted, etc.

That is very much intentionally the case. Rafael Chandler’s book does not try to be a bestiary for everyone.

The teratic tome’s mission statement is, I quote: “This enrichidion of entities should only be used by DMs inclined towards malfeasance, sadism, and base wrongdoing.” I’d disagree there – sadism doesn’t really have anything to do with it. The creatures herein are hard, deadly and often disturbing; an abundance of them will make a campaign feel dark indeed. But, from a design point of view, I did not consider them to be sadistic or dickish – they are easy to run and don’t provide juvenile “Haha, you lose!” mechanics.

In short: If you are looking for creatures that are perfect for a dark fantasy or horror game, including a VAST array of unique foes, then oh boy, you won’t find anything better or more vile out there. Even if you’re playing another system like PFRPG or 5e or even Esoterrorists/Fear Itself/etc., you’ll find your share fair of wicked ideas in these pages.

Not sure whether this is for you? Well, here’s the deal: This is PWYW as per the writing of this review. When I got this book, I paid its former asking price of $6.66 for it and it was worth every cent. In fact, I got the hardcover as well – which, btw., is an orange-spined, gorgeous thing that seamlessly fits next to your old-school gaming material…and which can, at this point, be similarly bought for an at-cost price. That is damn impressive for a book of this quality and means that, if you’re even remotely interested in a book of truly EVIL things…then you should definitely check this out.

Personally, I love some disturbing horror in my game; not all the time, but this book most definitely delivers that component in spades. Hence, my final verdict will clock in at 5 stars + seal of approval.

You can check out this massive bestiary here on OBS for PWYW!

You can get this book at cost (not even 12 Euros!) here on lulu!