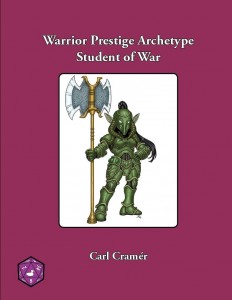 This pdf of the Warrior Prestige Archetype-series clocks in at 8 pages, 1 page front cover, 1 page editorial/introduction (explaining the base concept of the series), 1/2 a page advertisement, 1 page SRD leaving us with a 4.5 pages of content, so let’s take a look!

The student of war utilizes the fighter as the base chassis, which means full BAB-progression and proficiencies, good Fort-saves and d10 HD, but teh Student fo War gets 4+Int skills.

The class gets a bonus feat at first, 2nd and every 4 levels thereafter, which must be chosen from the combat-feat-type. They may select fighter-only feats, treating their class level as fighter level for the purpose of prerequisites. 3rd level nets armor training, 7th allows for full movement in heavy armor and 19th level nets DR 5/- whenever wearing armor or a shield.

2nd level provides mind over metal, i.e. the Int-for Dex-substitution of the PrC – good to see this moved down, since it’s a basic ability. The signature ability Know Your Enemy is gained at 4th level, and if you’re like me and obsessively memorize text, a quick check-up of the base PrC’s text will show that the wording here actually cleans up a glaring oversight regarding humanoids from the PRC – kudos! The bonus granted and its scaling is solid and action-economy-wise, we also get a nice progression that fits with the respective levels. The same cannot be said about Anticipate – also gained at 4th level, it’s where the class somewhat goes off the rails: Where the original ability had a daily limit, this one hasn’t. Yes, this means essentially evasion for all 3 saves. Urgh.

The pdf provides FCOs for the core races as well as a sample goblin NPC at 1st, 5th, 10th and 15th level.

Carl Cramér has a difficult task here – the student of war is certainly not the most compelling of PrCs. The class presented here is a solid take on the concept – and one, let me state this loud and clear, that is better than the base PrC it is based one. That being said, it also falls a bit short of its own potential. The decision to make the first 3 levels defined exclusively by bonus feats & passive abilities make the class less compelling than it could be – by moving the distinct Know thy Enemy-ability down to 1st level and adding a scaling mechanism to prevent dip-exploits, this class could have been more distinct.
As written, it begins to come into its own at 4th level, where the active signature abilities are granted. And yes, I do believe that Anticipate should remain here – but not as an unrestricted ability. A lenient daily cap that scales with class levels could have made this one fit perfectly…as written, this ability is good enough to make a 4-level dip into the class an option I’d definitely consider, especially when combined with a class that provides many or more good saves…for in the context of the student of war itself, the ability is not broken…in the overall frame of rules, though…urgh.

At the same time, this Prestige Archetype does have some awesome components, providing a fix and some nice new content…so how to rate this? In the end, I will settle on a final verdict of 3 stars for this one.