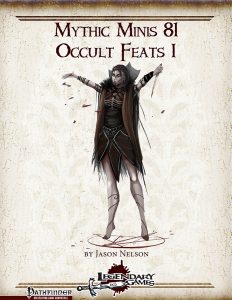 -Chakra Adept: Add +1/2 tier to serpent-fire ki gained from this (or Chakra Master); this one also lets you roll both Fort and Will saves when maintaining chakras sans opening new ones as a swift action and choose the better result, also increasing the number of open chakras for the purpose of determining ability efficiency. Additionally, this improves the action economy of using open chakra abilities to a swift action and puts a chaotic timer on the closing of chakras. This is amazing, as it makes chakras more viable.

-Chakra Initiate: Add +1/2 tier for the purpose of determining which chakras you can open and to the Fort/Will-saves versus serpent-fire. Additionally, you may use mythic power interchangeably with ki for the purpose of opening and maintaining chakras. Also treat all chakra effect as myhic is you use at least one mythic power to open chakras. Nice!

-Chakra Master: You still have to spend one ki to open the root chakra…but thereafter, you can spend 2 ki for two open chakras or 4 ki for 3 in a single round. Oh, and if you fail a save versus serpent-fire, you may reroll it via mythic power. I love how this mythic tree makes the concept actually VIABLE.

-Empath: Use the read aura occult skill unlock as a swift action; if you instead use a full-round action, you may roll both Perception AND Sense Motive and take the better result. The penalty for multiple uses is also decreased.

-Lucid Dreamer: Add mythic tier to Charisma checks to determine initial condition in a dream and when attempting impossible feats in a dreamscape. Also nets +1/2 tier to CL to control magic in a wild magic area and gets rid of fatigue when dying in a dreamscape. Also cool: When targeted by a fool with a dream-related spell from a brief list, you may expend 2 mythic power to also affect the caster with it…or, if you can cast the spells, one of your choice…sans mythic power expenditure. i love this “drawing into dream”-option here!!

-Psychic Combatant: +1/2 tier to manifestation points per day; outside of psychic duels, the DC gained lasts longer and applies to all mind-affecting spells. While thus affected, you may also spend two manifestation points when failing a save versus a psychic spell to add your surge die as a bonus to the saving throw. Neat!

Jason Nelson’s mythic occult feats do their job exceedingly well – they not only make Chakras much more viable by increasing their potency, they also know when to go into breadth, rather than depth, adding completely new options to the respective feats. Pretty much an all killer, no filler array, well worth 5 stars + seal of approval.

You can get these cool mythic, occult feats here on OBS!