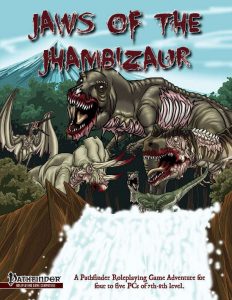 This adventure for Skybourne clocks in at 20 pages, 1 page front cover, 1 page editorial/ToC, 1 page SRD, 1 page advertisement, leaving us with 16 pages of content, so let’s take a look!

All right, first things first: This adventure makes use of a lot of material from the Player’s Guide to Skybourne, so if some of these races and terms seem odd to you, that’s why.

Before I dive into the adventure’s plot, I should note that the pdf includes 4 magic items and a mundane item – the latter being the fang pistol, which is a more expensive flintlock pistol with really costly ammo – however, it does cause 1 bleed damage. The lesser ancestral fang increases slapping tail damage die size; odd: the write-up mentions a greater version, but the item fails to specify requirements or costs for that version. A spell-reference is also not italicized. The item can only be used by cherufe.

The feathered cape can be gripped with both hands for ½ speed fly speed and poor maneuverability, using Acrobatics instead of Fly. The magma heart nets simultaneously the benefits of elemental body I (earth) and (fire). The sanguine gorget allows wearers to, as a swift action, bite (1d4) a pinned target, which is automatically hit. That…is not something that usually happens in PFRPG. The wearer thus also gains temporary hit points, but risk frenzying for 1 minute, with fatigue thereafter. Not a fan of this item; its design could have been handled more elegantly. There is another magic item within, but more on that one later.

All right, just GMs around? Great!

This module begins with the PCs happening upon a halfling obviously in peril; this would be a man named Hadrid, who requests aid from the PCs to get to the cherufe village Avarudies; he makes a generous offer, courtesy of owning a magic item shop, but conspicuously mentions that the PCs should not use the airship docks, instead making their way on a different route into the settlement atop the mesa. Three paths are provided, and if they don’t hurry, they may well attract the attention of their first jhāmbi-raptor. After this simple escort mission, the PCs enter Hadrid’s shop in the settlement – only to have it surrounded by guards, dragging them off towards the chief, who, oddly, has the rough guards leave and then proceeds to free the PCs to explain the situation. There is a growing sense of unrest and paranoia, and some have accused Hadrid of being the culprit of the mysterious curse plaguing the nearby jungle. The settlement is briefly discussed, and no map is provided of it, which is a bit of a pity. The settlement does get a mostly functional statblock, though it is incomplete, lacking the alignment and size line.

The write-up does contain some notes on local villagers, and the module assumes that striking up a conversation will have the GM roll a secret Charisma check – on a success, a tidbit of information, the only relevant one to be gleaned, is learned. A more complex or interesting flow-chart, or an investigation that actually takes player-actions into account would have been nice here. Making the check irrelevant regarding PC behavior and ideas is not something I particularly like or consider to be rewarding adventure design. The diviner Mokwori, to whom the trail leads, is a pawn, but one that has a huge Bluff-check, thanks to a ring of glibness. This item is also a minor bottleneck to bear in mind – the module assumes that the PCs have no means to notice it. At the end of the first day of investigation, jhāmbi-raptors and jhāmbi-pteranodons attack the village! Oddly, the encounter doesn’t at least briefly, note the number of assailants bolded with a pointer towards the statblocks, requiring close-reading of the actual text; similarly, only the total number of attacking critters is provided, not the number the PCs get to actually face. A quick sidebattle resolution note is provided, though.

During the battle, the most esoteric/psychic/etc. PC is drawn into a mindscape by the ghost that has haunted the chieftain – this is scripted, and does not take the mindscape mechanics into account. The ghost flatly states that the aforementioned diviner has fallen under the influence of a great evil – and said diviner is, coincidentally “kidnapped” by one of the jhāmbi-pteranodons. The exactly locations and logistics here are somewhat opaque, courtesy of the lack of maps, and this sequence cannot be prevented RAW. If the PCs noticed the ring and attempted to bring the diviner to the chief, a reasonable course of action, the module derails rather hard.

From suspicion to wholehearted embrace takes but this one battle, and in the aftermath, the PCs will need to venture into the jungle, and the jungle indeed comes with 3 rather cool hazards that help generate the sense of hostility that Skybourne’s forests are supposed to evoke. The PCs seem to be hounded by the undead dinosaurs that otherwise would be enemies to one another – towards a waterfall, where the jhāmbizaur, the massive brute and source of the curse, has killed the diviner and awaits the PCs to kill them and assert “total dominance” – the premise for why the entity doesn’t have the undead dinos swarm and annihilate the PCs seemed somewhat flimsy to me. If the creature is defeated, the other monsters turn on themselves – unless you’re going with the alternate end-game, where the airship turns up after the jhāmbizaur’s destroyed, enabling the PCs to engage in a harrowing escape. That one would have made much more sense to develop, but remains a footnote.

Personally, I think most groups would get the ship as soon as possible, making the sequence here awkward. The reward for the quest would be golden hearts – items sans slots that merge with the PCs, granting 13 temporary hit points for a minute after the PCs are reduced to 0 hit points. The hearts have no daily limit on how often they can be used, have no cooldown, and are thus, mechanically, problematic. The pdf concludes with further adventuring ideas and stats for the local guards, the undead dinos and the CR +2 jhāmbi-template.

Editing and formatting are good on a formal level; on a rules-language level, the pdf is somewhat less impressive in the crunchy bits. Layout adheres to a nice two-column full-color standard and the undead dino-artworks by Jacob Blackmon rock. The pdf comes fully bookmarked, but really suffers from its lack of any maps whatsoever – ever very basic b/w plans would have helped render the village more interesting.

Mike Myler does evocative, buttkicking concepts really well – and the elevator-pitch for this adventure is great: ”Undead dinosaurs!” – What’s not to love? Unfortunately, the execution of the adventure is less impressive than the amazing concept deserved. The module feels like a rough draft, a sketch waiting to be filled up, feels like a case of “This’ll do.” The adventure is brief and thus required concise writing – but that’s no excuse for its weaknesses. I can note several shorter OSR-modules or Society scenarios that provide more player agenda. The issue here, from a structural perspective is, that after the slightly modular introduction, the rest of the module is a very, very narrow railroad. The actions of the PCs, ultimately, do not matter at all during the investigation sequence. Thereafter, the jungle-trek, while spiced up with cool hazards, ultimately is yet another extended cut-scene. This is basically Telltale Games design – present an interesting concept/story, generate the illusion of choice and let the cut-scenes roll; combat is spliced in, sure, but it almost feels like a JRPG interrupting the linear story with combat encounters in their own engine; two aspects of the game that are more or less divorced from one another, if you will.

That alone would not suffice to sink the concept, but this is a module for Skybourne…and promptly takes the frickin’ airships, the central selling point of the setting, what sets it apart, and cuts them from the whole deal, relegates them to window dressing. I absolutely don’t get the rationale behind this. Worse, the railroad presented fails to grasp how owning an airship will undoubtedly change the ways the PCs tackle conflicts and challenges…like, you know, an undead dino-army in a cursed forest. Who in their right mind wouldn’t take the damn ship and its artillery with them? This module feels like sketch onto which Skybourne was painted as window-dressing; even if you eliminate all the Skybourne-specifics, you’re still left with a railroad sans player-agenda. The great concept deserved better. My final verdict can’t exceed 2 stars.